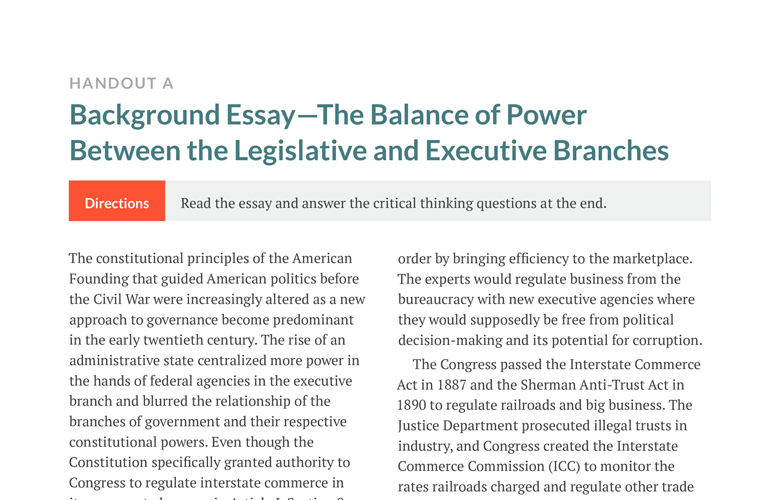 Directions: Read the essay and answer the critical thinking questions at the end.

In the late nineteenth century, railroads and corporations began to grow exponentially as big business became larger through waves of mergers. Soon, trusts began to exercise monopolistic control over several industries and over the broader economy. Although they benefitted workers with jobs and often consumers with falling prices on goods, they also created an incredibly wealthy ruling class that formed corrupt ties to politicians.

Many Americans began to fear the effects of the rise of big business. Progressive thinkers of the late nineteenth and early twentieth centuries advocated the idea that only the federal government had the national power to regulate business. They believed that educated, scientific experts could rationalize the economic and social order by bringing efficiency to the marketplace. The experts would regulate business from the bureaucracy with new executive agencies where they would supposedly be free from political decision-making and its potential for corruption.

During the presidencies of Theodore Roosevelt and Woodrow Wilson, Congress significantly increased the number of executive agencies to regulate commerce. Roosevelt argued that, “Corporations should be managed with due regard of the public as a whole,” and presided over a large expansion of federal regulatory power. The Hepburn Act (1906) increased the ICC’s power and allowed it to set rates for railroad shipping. The uproar over Upton Sinclair’s The Jungle led to the passage of the Meat Inspection Act and the Pure Food and Drug Act of 1906, which created the Food and Drug Administration (FDA) with additional power over interstate commerce. Therefore, Congress delegated its authority to administrative agencies.

President Woodrow Wilson also supported enhancing executive authority over interstate commerce. He asserted that progressives sought to “interpret the Constitution according to the Darwinian principle” of a living Constitution with new meanings in different ages. Congress passed several key pieces of legislation that delegated authority to the executive to manage the economy. The most important were the Federal Reserve Act (1913), which established the Federal Reserve, and the Clayton Antitrust Act (1914),which created the Federal Trade Commission with power to manage competitive practices. World War I greatly enhanced federal executive power as the government nationalized the railroads and the War Industries Board directed the wartime economy. The executive had assumed many of powers constitutionally granted to Congress.

The progressive vision of the administrative state regulating the economy and commerce continued in the New Deal. President Franklin D. Roosevelt and a Democratic Congress struggled to find a way to deal with the worldwide crisis of the Great Depression. As the economy collapsed and unemployment skyrocketed, Congress passed a number of emergency laws with more regard for relieving suffering and stimulating the economy than worrying about the strict constitutionality of legislation.

Congress passed the National Industrial Recovery Act (NIRA) in 1933 and suspended antitrust legislation due to the economic emergency and allowed for “industrial self-regulation.” It created the National Recovery Administration (NRA) which was an executive agency that worked with business to set production quotas, prices of goods, and wages for each industry. The NRA (instead of Congress) regulated commerce between the states and within states.

The NIRA angered most constituencies that it was supposed to help. Big business resented the intrusion and regulation, consumers were angry over rising prices, and workers felt the promised right to strike was not adequately protected. Journalist Walter Lippmann complained, “The excessive centralization… [is] producing a revulsion of feeling against bureaucratic control of American economic life.” President Roosevelt defended economic cooperation and regulation against the former “individual self-interest and group selfishness” that he argued characterized American capitalism. The NIRA was quickly challenged in the courts and a case made its way to the Supreme Court.

The Schechter brothers owned two kosher butcher shops in New York City and operated under minute NRA regulations that controlled every step in how chickens were sold to a customer. The government accused them of selling unhealthy chickens and violating several parts of the poultry codes. The “sick chicken” case was decided by the Supreme Court in 1935.

In Schechter Poultry Corp. v. United States (1935), the Supreme Court unanimously ruled that the NIRA was unconstitutional. Since the Schechter slaughterhouses conducted business within the state of New York, Congress (or any executive agency) could not regulate intrastate trade. More importantly, the Court held that Congress could not delegate its authority of regulating commerce to an executive agency such as the NRA since it violated the separation of powers. Justice Louis Brandeis even privately told administration officials: “I want you to go back and tell the president that we’re not going to let this government centralize everything.”

President Roosevelt was furious that the Court had restricted his ability to use the New Deal to resolve the economic crises as he and Congress saw fit. At a press conference, Roosevelt told reporters, “We have been relegated to the horse-and-buggy definition of interstate commerce.”

Nevertheless, the Supreme Court relented to Roosevelt’s expansive vision of federal regulatory power through the commerce clause a few years later. Congress continued to transfer its authority over regulating interstate commerce to the executive branch which continued to grow in power throughout the twentieth century.

This delegation of legislative power over to federal agencies fundamentally changed Congress. Instead of a deliberative body, representing the people in the creation of laws, Congress became more of an oversight body, which assumed the ability to supervise the dozens of newly-established agencies. Since Congress created and authorized the agencies (and funded them, too), Congress could intervene when an agency took the wrong course of action. Now an oversight body as opposed to a lawmaking body, Congress placed more authority in its committees to hold oversight hearings and monitor the administrative state in other ways.

Other institutions adapted to delegation as well. The president, in particular, began to use the bureaucracy to make policy outside of the legislative process, through executive actions in which Congress was not involved. And the people began to look more to the president as a policymaker than their elected representatives in Congress.