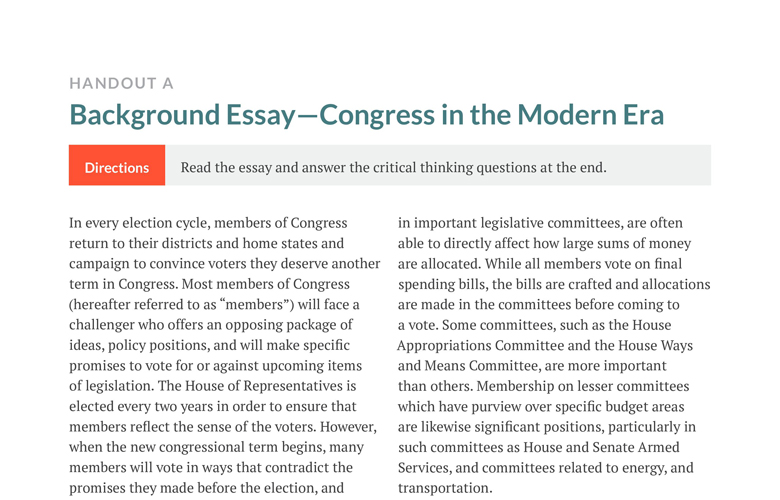 Background Essay—Congress in the Modern Era

Directions: Read the essay and answer the critical thinking questions at the end.

In every election cycle, members of Congress return to their districts and home states and campaign to convince voters they deserve another term in Congress. Most members of Congress (hereafter referred to as “members”) will face a challenger who offers an opposing package of ideas, policy positions, and will make specific promises to vote for or against upcoming items of legislation. The House of Representatives is elected every two years in order to ensure that members reflect the sense of the voters. However, when the new congressional term begins, many members will vote in ways that contradict the promises they made before the election, and surprise the constituents who ushered them into office. The candidate for Congress sometimes behaves very differently from the person who becomes a member of Congress. Why, then, do representatives and senators make the voting and policy decisions that they do, especially in contravention of their public platforms and in violation of the promises they previously made to their constituents? Why do voters continue to reelect their individual representatives but disapprove of Congress as a whole? The answer lies in the structure of the legislative process and Congress itself, the dominating role of political parties, and the lure of campaign contributions from special interests.

Because Article I of the U.S. Constitution endows Congress with the sole power to raise revenue and appropriate these funds as it sees fit, members of Congress, particularly those in important legislative committees, are often able to directly affect how large sums of money are allocated. While all members vote on final spending bills, the bills are crafted and allocations are made in the committees before coming to a vote. Some committees, such as the House Appropriations Committee and the House Ways and Means Committee, are more important than others. Membership on lesser committees which have purview over specific budget areas are likewise significant positions, particularly in such committees as House and Senate Armed Services, and committees related to energy, and transportation.

Because Congress has the “power of the purse,” many members work to drive the allocation of funds to benefit constituents and industries in their home districts and states, and often push allocations for businesses and projects in which they have particular interests. These powers make members vulnerable to outside influences, often called special interest groups, who work to persuade members to allocate funds in ways that benefit their favored causes or businesses. Special interest groups can be, and often are, from outside the member’s district or home state. Some interest groups and industries employ professional lobbyists who work full time to persuade members and their staffs to attach specific language and funding to bills. Frequently, lobbyists are former congressional staffers and retired members of Congress who have specialized knowledge of backroom legislative processes and draw on an extensive network of contacts on Capitol Hill.

In return for working for special interests by introducing and amending favorable legislation, members of Congress can expect to receive support from these groups or industries, most often in the form of financial contributions to the candidate’s re-election campaign. The allure of financial reward has led many to call for campaign finance reform to further limit industrial and political action committee (PAC) contributions to members of Congress during reelection. While the interests of a particular lobby may benefit the nation as a whole, many lobbies seek legislation that would unfairly benefit their interests over others’. The more that these lobbies can help Congress members gain reelection, the more likely it is that members will continue to support legislation that aids these lobbies.

Members routinely spend millions of dollars to win elections and to keep their seats every two or six years. In one such recent high-stakes contest, in his 2014 bid for reelection Senate Majority Leader Mitch McConnell of Kentucky spent over $30 million to retain his seat. While a candidate’s funding can be drawn from their own constituents, and while they can expect generous contributions from friendly interest groups, industries, and PAC’s, the national political parties also play a role in the party finance of their own candidates. Therefore, the wishes of the national political party leadership also influence members’ voting behavior.

National party committees (such as the Democratic National Committee and Republican National Committee) formulate national platforms and electoral strategies in consultation with outside advisors, pollsters, and major donors. The party strategy is then implemented by backing candidates during the nomination process most likely to follow the party’s leadership, and the party attempts to influence the platforms of the individual candidates. Once elected, members are expected to follow their party’s particular legislative agendas. Within the House and Senate, each party maintains its own leadership structure. In the House, the Speaker of the House sets his or her party’s legislative agenda, and is assisted by House Majority Leader and the House Majority Whip. The minority party is headed by the Minority Leader who assisted by the Minority Whip. The two major parties also maintain junior leadership positions tasked with transmitting leadership policy.

Before a piece of legislation comes to a vote, members and their staffs normally have time to review and consider the contents of the bill. On important bills, party leaders adopt stances for or against, and transmit their voting expectations to caucus members. The whip keeps track of potential yes and no votes, and those who are undecided. Members who plan to vote against legislation favored by their own party’s leadership may expect to discuss their voting behavior with the whip. The whip’s role is that of an enforcer, and the whip must choose a carrot-or-stick approach to compel the member to vote with the leadership’s wishes. While the whip does possess a few methods of pushing members to vote in desired ways, leadership lacks a guaranteed way of enforcing loyalty. When individual members have the backing of powerful outside interests, are popular with their own constituents, or have prominent committee positions, there is little risk if they oppose the leadership’s agenda.

Among the most common punishments for failure to follow leadership demands include removal from memberships or chairmanships on committees. Bills the member has introduced may not be advanced through the legislative process, or leadership may publicly oppose their bill in retaliation. The member may lose important party financial contributions to their reelection campaign. Therefore, party leaders and their whip enforcers have several tools to coerce members to vote in ways that would seem at odds with their own political beliefs and past promises to constituents. If the leadership uses a coercive approach too often, it can cause discord within its caucus and spark calls for a change of leadership; leadership must choose its legislative priorities and carefully decide how it will persuade its caucus members to vote accordingly.

Thanks to the policy and budgetary decisions of Congress over the course of many decades, the federal government has grown enormously. The growth of the federal government in both its size and the scope of its activities has initiated a major increase in the size of congressional support staffs. These staffers assist members in wielding their influence to benefit favored groups and help members maintain their privileged positions and assignments.

Secondarily, they act as liaisons between the people and their elected representatives. While Congress is in session, a member is most often attending committee hearings or voting on the floor of the House or Senate. Because time is limited, they are unable to comprehensively read and review every bill up for consideration. This duty falls to the member’s staff.

Legislative assistants are, in theory, policy experts who manage their own legislative portfolios on such topics as national defense, healthcare, energy, and education. They assist the legislative director to craft and analyze bills, and are liaisons between industries and interest groups and the member. Thus, the legislative assistant who handles the national defense portfolio, for example, is an important liaison between the congressperson and a company that does business with the military. The press or communications staffer is the media’s point of contact. It is this person’s role to shield their boss from criticism and to cultivate a positive public image that will attract voters. Additionally, press staffers often write many of the official statements that the media attributes to the member.

Finally, a typical office employs a legion of unpaid interns. These individuals are normally the first and only person a constituent speaks to if they call the office. The intern is the first line of defense barring constituents from interacting directly with policy makers and their elected members of Congress. Additionally, interns contribute to many of the necessary clerical tasks that keep the office functioning, attend committee briefings, and escort constituents and VIPs who visit Washington, D.C. Non-intern staff are usually very young, meagerly paid, and work long hours. Because staff positions are constantly vacated in favor of more senior roles with other members or more lucrative positions in the private sector, the majority of legislative analysis, bill-creation, and decision-making is conducted by legislative assistants in their twenties.

Another side effect of the growth of the federal government, and the delegation of power to federal agencies, is the emergence of caseworkers. When constituents face intractable problems connected to federal agencies, caseworkers contact the agencies on the constituent’s behalf and attempt to resolve the problems they are experiencing. Often these problems come in the form of denied Veterans Administration or Social Security disability benefits. In rural congressional districts, constituents often find themselves at odds with Environmental Protection Agency (EPA) regulations concerning water and land use. In many cases, constituents receive no timely communications from the federal agency on the progress of their claims and simply want their congressperson to ensure the matter is still being investigated. In such common scenarios as these, caseworkers collect all pertinent background information regarding the constituent’s conflict or problem, and initiate a congressional inquiry in the name of the congressperson. These agencies, in turn, employ their own congressional casework liaisons who communicate with their caseworker counterparts on Capitol Hill.

Without passing new laws, it is difficult for Congress to change the regulatory or administrative decisions made by federal agencies. Because these agencies rely upon budgetary appropriations and authorizations made by Congress, they must remain responsive and cooperative with Congress members and their staffs. Still, Congress has delegated a great amount of power to these bureaucratic institutions. The caseworker merely has the power to inquire in the name of their congressperson on the constituent’s behalf. This affords constituents a second-look at their case and an opportunity to ensure that due diligence and due process have been followed. In the event that a constituent’s case is closed with a negative outcome, e.g. they have been denied a disability rating by the Social Security Administration or other entity, the caseworker is powerless to change the outcome, even with the Congress member’s authority on their side, and must just try to explain the situation to the disappointed constituent.

The growth of the administrative state, the allure of re-election, and the promise of rewards from special interests have all helped to greatly alter the nature of congressional decision-making and the relationship between members of Congress and their constituents. As this overview has shown, the evolution of Congress poses important questions for Americans struggling to find new ways of making Congress more collegial, deliberative, and responsive.