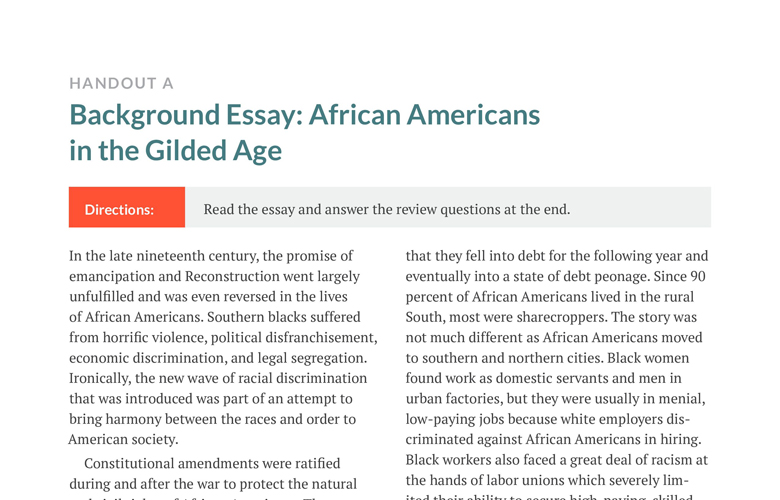 Directions: Read the essay and answer the review questions at the end.

In the late nineteenth century, the promise of emancipation and Reconstruction went largely unfulfilled and was even reversed in the lives of African Americans. Southern blacks suffered from horrific violence, political disfranchisement, economic discrimination, and legal segregation. Ironically, the new wave of racial discrimination that was introduced was part of an attempt to bring harmony between the races and order to American society.

Constitutional amendments were ratified during and after the war to protect the natural and civil rights of African Americans. The Thirteenth Amendment forever banned slavery from the United States, the Fourteenth Amendment protected black citizenship, and the Fifteenth Amendment granted the right to vote to African-American males. In addition, a Freedmen’s Bureau was established to help the economic condition of former slaves, and Congress passed the Civil Rights Act in 1875.

Despite these legal protections, the economic condition of African Americans significantly worsened in the last few decades of the nineteenth century. Poor southern black farmers were generally forced into sharecropping whereby they borrowed money to plant a year’s crop, using the future crop as collateral on the loan. Often, they owed so much of the resulting crop that they fell into debt for the following year and eventually into a state of debt peonage. Since 90 percent of African Americans lived in the rural South, most were sharecroppers. The story was not much different as African Americans moved to southern and northern cities. Black women found work as domestic servants and men in urban factories, but they were usually in menial, low-paying jobs because white employers discriminated against African Americans in hiring. Black workers also faced a great deal of racism at the hands of labor unions which severely limited their ability to secure high-paying, skilled jobs. While the Knights of Labor and United Mine Workers were open to blacks, the largest skilled-worker union, the American Federation of Labor, curtailed black membership, thereby limiting them to menial labor.

African Americans throughout the country suffered from violence and intimidation. The most infamous examples of violence were brutal lynchings, or executions without due process, by angry white mobs. These travesties resulted in hangings, burnings, shootings, and mutilations for between 100 and 200 blacks—especially black men falsely accused of raping white women—annually. Race riots broke out in southern and northern cities from New Orleans and Atlanta to New York and Evansville, Indiana, causing dozens of deaths and property damage.

Although African Americans were elected to Congress and state legislatures during Reconstruction, and enjoyed the constitutional right to vote, black civil rights were systematically stripped away in a campaign of disfranchisement. One method was to charge a poll tax to vote, which precious few black sharecroppers could afford to pay. Another strategy was the literacy test which few former slaves could pass. Furthermore, the white clerks at courthouses had already decided that any black applicant would fail, regardless of his true reading ability. Since both of those devices at times excluded poor whites as well, grandfather clauses were introduced to exempt from the literacy test anyone whose father or grandfather had the right to vote before the Civil War. Moreover, the Supreme Court declared the 1875 Civil Rights Act guaranteeing equal access to public facilities and transportation to be unconstitutional in the Civil Rights Cases (1883) because the law regulated the private discriminatory conduct of individuals rather than government discrimination.

One of the most pervasive and visible signs of racism was the rise of informal and legal segregation, or separation of the races. In a wholesale violation of liberty and equality, southern state legislatures passed “Jim Crow” segregation laws that denied African Americans equal access to public facilities such as hotels, restaurants, parks, and swimming pools. Southern schools and public transportation had vastly inferior “separate but equal” facilities that left the black minority subject to unjust majority rule. Housing covenants and other devices kept blacks in separate neighborhoods from whites. African Americans in the North also suffered informal residential segregation and economic discrimination in jobs.

In one of its more infamous decisions, the Supreme Court ruled that segregation statutes were legal in Plessy v. Ferguson (1896). In Plessy, the Court decided that “separate, but equal” public facilities did not violate the Equal Protection Clause of the Fourteenth Amendment or imply the inferiority of African Americans. Justice John Marshall Harlan was one of the two dissenters who wrote, “Our constitution is colorblind, and neither knows nor tolerates classes among citizens. In respect of civil rights, all citizens are equal before the law.”

One of the great ironies of the series of reforms instituted in the early twentieth century known as the Progressive Era was that segregation and racism were deeply enshrined in the movement. Progressives were a group of reformers who believed that the industrialized, urbanized United States of the nineteenth century had outgrown its eighteenth-century Constitution. That Constitution did not give government, especially the federal government, enough power to deal with unprecedented problems. Many Progressives embraced Social Darwinism and eugenics which was part of the most advanced science and social science taught in universities and scientific circles. Social Darwinism ranked various groups, which its proponents considered “races,” according to certain characteristics and labelled Anglo-Saxon and Teutonic peoples as superior and Southeastern Europeans, Jews, Asians, Hispanics, and Africans as inferior races. Therefore, there was a supposed scientific basis for segregation as the “higher” races ruled the “lower.” Moreover, Progressives generally endorsed segregation as a means of achieving their central goal of social order and harmony between the races. There were notable exceptions, such as Jane Addams, black Progressives such as W.E.B. DuBois, and the Progressives of both races who founded the National Association for the Advancement of Colored People (NAACP), but Progressive ideology contributed to the growth of segregation.

Progressive Presidents Theodore Roosevelt and Woodrow Wilson generally supported the segregationist order. While Roosevelt courageously invited African-American leader Booker T. Washington to dinner in the White House and condemned lynching, he discharged 170 black soldiers because of a race riot in Brownsville, Texas in 1906. Wilson had perhaps a worse record on civil rights as his administration fired many black federal employees and segregated federal departments.

Several black leaders advanced the cause of black civil rights and helped organize African Americans to defend their interests through self help. The highly-educated journalist, Ida B. Wells, launched a crusade against lynching by exposing the savage practice. She also challenged segregation by refusing to change her seat on a train because it was in an area reserved for white women. Other African Americans unsuccessfully boycotted segregated streetcars in urban areas but utilized a method that would prove successful in the mid-twentieth century.

A debate took shape between two African-American leaders, Booker T. Washington and W.E.B. DuBois. Washington was a former slave who founded the Tuskegee Institute for blacks in the 1880s and wrote Up from Slavery. He advocated that African Americans achieve racial equality slowly by patience and accommodation. Washington thought that blacks should be trained in industrial education and demonstrate the character virtues of hard work, thrift, and self-respect. They would therefore prove that they deserved equal rights and equal opportunity for social mobility. At the 1895 Atlanta Exposition, Washington delivered an address that posited, “In the long run it is the race or individual that exercises the most patience, forbearance, and self-control in the midst of trying conditions that wins…the respect of the world.”

DuBois, on the other hand, was a Harvard and Berlin-educated intellectual who believed that African Americans should win equality through a liberal arts education and fighting for political and civil equality. He wrote the Souls of Black Folk and laid out a vision whereby the “talented tenth” among African Americans would receive an excellent education and become the teachers and other professionals who would uplift fellow members of their race. He and other black leaders organized the Niagara Movement that fought segregation, lynching, and disfranchisement. In 1909 the movement’s leaders founded the NAACP, which fought for black equality and initiated a decades-long legal struggle to end segregation. DuBois edited its journal named The Crisis and wrote about issues affecting African Americans. He had the simple wish to “make it possible for a man to be both a Negro and an American, without being cursed and spit upon by his fellows, without having the doors of opportunity closed roughly in his face.”

American participation in the Spanish-American War and World War I initiated a dramatic change in the lives of African Americans and in the demography of American society. In both wars, black soldiers were relegated to segregated units and generally assigned to menial jobs rather than front-line combat. However, black soldiers had opportunities to fight in the charges against the Spanish in Cuba and against the Germans in the trenches of France. They demonstrated that they were just as courageous as white men even as they fought for a country that excluded them from its democracy. Moreover, travel to the North and overseas showed thousands of African Americans the possibility of freedom and equality that would be reinforced in World War II while fighting tyranny abroad.

Wartime America witnessed rapid change in the lives of African Americans especially in the rural South. Hundreds of thousands left southern farms to migrate to cities in the South such as Birmingham or Atlanta, or to northern cities in a mass movement called the Great Migration. This internal migration greatly increased the number of African Americans living in American cities. As a result, tensions grew with whites over jobs and housing that led to deadly race riots during and immediately after the war. However, a thriving black culture in the North also resulted in the Harlem Renaissance and the celebration of black artists.

The Great Migration eventually led to over six million African Americans following these migration patterns and laying the foundation for the Civil Rights Movement of the mid-twentieth century. Blacks resisted segregation when it was instituted and continued to organize to challenge its threat to liberty and equality in America.