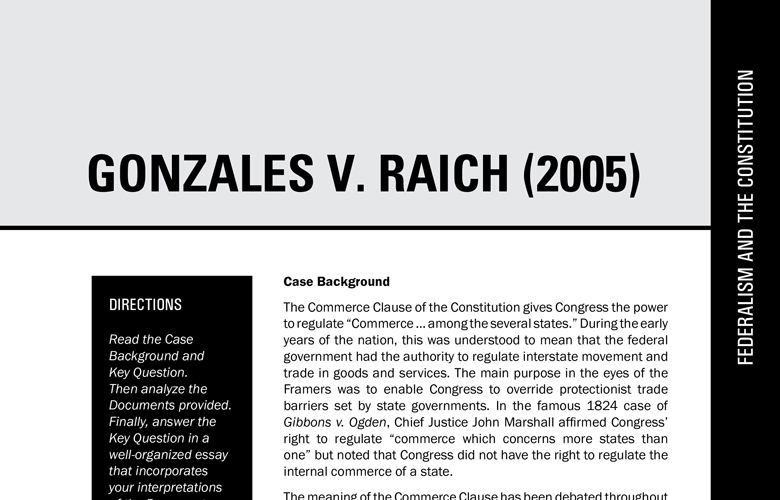 The Commerce Clause of the Constitution gives Congress the power to regulate “Commerce … among the several states.” During the early years of the nation, this was understood to mean that the federal government had the authority to regulate interstate movement and trade in goods and services. The main purpose in the eyes of the Framers was to enable Congress to override protectionist trade barriers set by state governments. In the famous 1824 case of Gibbons v. Ogden, Chief Justice John Marshall affirmed Congress’ right to regulate “commerce which concerns more states than one” but noted that Congress did not have the right to regulate the internal commerce of a state.

The meaning of the Commerce Clause has been debated throughout our history. Critics of several pieces of New Deal legislation claimed that the laws relied on an overly-broad interpretation of the Clause. In the first case, Schechter Poultry Corp. v. US (1935), the Court held that the federal government may only regulate the “direct” effects of interstate commerce, thus striking down Section 3 of the National Industrial Recovery Act. Seven years later, another Court (with members more sympathetic to the Roosevelt administration) held that Congress could regulate any type of economic activity, which might have a substantial impact on interstate commerce. This decision upheld the Agricultural Adjustment Act. For more than the next fifty years, the Supreme Court did not act to restrict Congress’ power to regulate a wide variety of activities.

In the 1990’s, the Supreme Court took a more limited view of the application of the Commerce Clause with cases like U.S. v. Lopez and U.S. v. Morrison. Court observers wondered if that trend would continue when a 2005 case prompted a re-evaluation of federal regulatory powers. California resident Diane Monson was surprised when the federal Drug Enforcement Agency seized six marijuana plants growing in her backyard. She and her co-defendant, Angel Raich, suffered from a variety of serious medical conditions and used marijuana to relieve symptoms. The use of the drug was legal under California law. However, under a federal law-the Controlled Substances Act (CSA)–marijuana was considered illegal contraband. Raich and Monson challenged the CSA, contending that their homegrown marijuana had no impact on interstate commerce and therefore its seizure was a violation of the Commerce Clause. Their case, Gonzales v. Raich (2005), placed the issue of federal regulatory powers squarely before the Court.