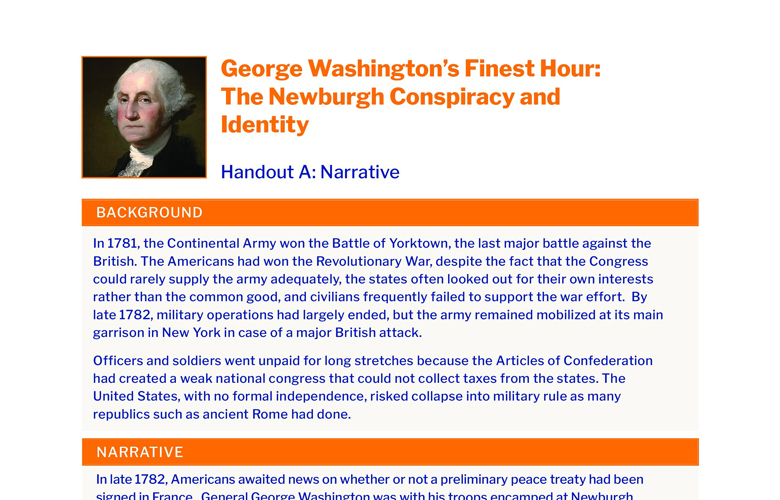 In 1781, the Continental Army won the Battle of Yorktown, the last major battle against the British. The Americans had won the Revolutionary War, despite the fact that the Congress could rarely supply the army adequately, the states often looked out for their own interests rather than the common good, and civilians frequently failed to support the war effort. By late 1782, military operations had largely ended, but the army remained mobilized at its main garrison in New York in case of a major British attack.

Officers and soldiers went unpaid for long stretches because the Articles of Confederation had created a weak national congress that could not collect taxes from the states. The United States, with no formal independence, risked collapse into military rule as many republics such as ancient Rome had done.

In late 1782, Americans awaited news on whether or not a preliminary peace treaty had been signed in France. General George Washington was with his troops encamped at Newburgh, N.Y., watching the remaining British troops that had occupied New York since 1776. Although his army had won the war with the victory at Yorktown, Washington would soon face a crisis that would test his character and dedication to the cause for liberty. He would have to choose whether he was a Caesar who would overthrow the republic or a Cincinnatus who would defend the republic and surrender power.

Earlier that year, Washington demonstrated that he identified with the American republican cause of liberty when he exchanged letters with a young officer named Lewis Nicola. Nicola, frustrated by the civilian authorities’ negative impact on the war effort, encouraged Washington to overthrow the Congress and become king. In Nicola’s reasoning, only a military dictatorship could bring the requisite order and stability necessary to govern the country.

Washington wrote Nicola a scathing letter that sternly rebuked his suggestion. The general was greatly pained that “such ideas exist[ed] in the army” and could not understand how his conduct “could have given encouragement to an address which to me seems big with the greatest mischiefs that can befall [America].” Washington went on, asserting, “You could not have found a person to whom your schemes are more disagreeable.” He warned that any opposition to Congress must be expressed “in a constitutional way” and advised Nicola to “banish these thoughts from your mind.”

However, the problem was larger than the thoughts of one disgruntled officer. Officers and soldiers in the Continental Army had not been paid in months, some for years. They sent a delegation from their encampment in Newburgh to Congress in January 1783 with a threatening petition that read, “We have borne all that men can bear – our property is expended – our private resources are at an end, and our friends are wearied and disgusted with our incessant applications.” They warned, “Any further experiments on [our] patience may have fatal effects,” and hinted at an overthrow of Congress and civilian government.

A few members of Congress used the pressure to push for greater national powers. For example, financier Robert Morris threatened to resign if Congress did not pass a tax to collect revenue to pay the soldiers. Despite the woeful financial situation, Washington did not stand alone in his support of Congress. His trusted friend and general of the artillery, Henry Knox, was a patriot who refused to take the bait of his fellow officers to become involved. Knox told the officers, “I consider the reputation of the American Army as one of the most immaculate things on earth. We should even suffer wrongs and injuries to the utmost verge of toleration rather than sully it in the least degree.”

In February, Alexander Hamilton, then serving in Congress, tried to persuade Washington to harness the discontent of the army to pressure Congress to adopt a stronger federal government. Hamilton wrote, “The claims of the army urged with moderation, but with firmness, may operate on those weak minds . . . so as to produce a concurrence in the measures which the exigencies of affairs demand.” Washington responded that the consequences of a general mutiny “would at this day be productive of civil commotions and end in blood. Unhappy situation this! God forbid we should be involved in it.” He cautioned Hamilton that, “the army is a dangerous instrument to play with.”

In mid-March, General Horatio Gates, the hero of the American victory at the Battle of Saratoga in 1777, joined the conspiracy. Gates’ aide penned an address to American soldiers that fanned their anger towards Congress: “Faith has its limits, as well as temper; and there are points beyond which neither can be stretched.” Gates called the officers to a meeting scheduled in a few days.

The rebellion against the government was averted by the character of George Washington, who dedicated himself to the republican principle of military deference to the civilian government. He demonstrated that he identified with Cincinnatus, not with Caesar. He learned about the Newburgh conspiracy and ended the impending rebellion by addressing his troops assembled at their new building, the Temple of Virtue, on March 15. In the Newburgh Address, he called on his soldiers to stop those who would “overturn the liberties of our country, and who wickedly attempt to open the flood gates of civil discord.”

He also made a dramatic appeal by pulling out his glasses while stating, “Gentlemen, you will permit me to put on my spectacles, for I have not only grown gray, but almost blind, in the service of my country.” Most of the men present had never seen their general use eyeglasses; this simple action reminded the officers that Washington, like the men he led, had made great sacrifices for the cause of liberty. The men renounced their intent to overthrow Congress and pledged their support for the republican government. In 1775, George Washington had chosen to go to war and lead the Continental Army because of his identification with what many called the “sacred cause of liberty:” the desire to win independence and self-government.

In 1783, with the fighting over and his goals achieved, Washington’s faith in that cause was put to the test. He never wavered and was never tempted to turn from his devotion to the American republic. Washington unfailingly demonstrated that his historic reputation as the American Cincinnatus would forever be identified with the liberties of America.