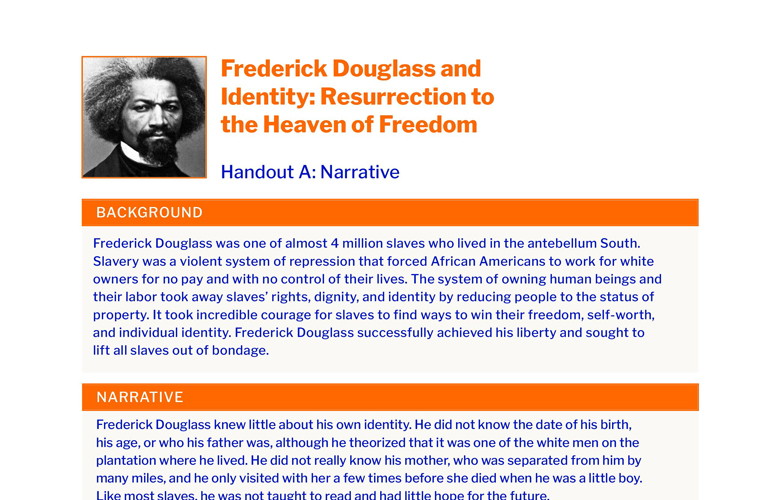 Frederick Douglass was one of almost 4 million slaves who lived in the antebellum South. Slavery was a violent system of repression that forced African Americans to work for white owners for no pay and with no control of their lives. The system of owning human beings and their labor took away slaves’ rights, dignity, and identity by reducing people to the status of property. It took incredible courage for slaves to find ways to win their freedom, self-worth, and individual identity. Frederick Douglass successfully achieved his liberty and sought to lift all slaves out of bondage.

Frederick Douglass knew little about his own identity. He did not know the date of his birth, his age, or who his father was, although he theorized that it was one of the white men on the plantation where he lived. He did not really know his mother, who was separated from him by many miles, and he only visited with her a few times before she died when he was a little boy. Like most slaves, he was not taught to read and had little hope for the future.

In 1833, Douglass’ owner sent him to a “slave breaker” named Edward Covey as Douglass was seen as difficult to manage, and suspected of planning to escape. Covey attempted to break the bodies and spirits of slaves; within a week, Covey whipped Douglass savagely. “Mr. Covey gave me a very severe whipping, cutting my back, causing the blood to run, and raising ridges on my flesh as large as my little finger,” Douglass later reported. Covey beat Douglass at least once a week.

Douglass said the experience crushed him. “Mr. Covey succeeded in breaking me. I was broken in body, soul, and spirit. My natural elasticity was crushed, my intellect languished, the disposition to read departed, the cheerful spark that lingered about my eye died; the dark night of slavery closed in on me; and behold a man transformed into a brute!”

Douglass fell into a deep depression. One day, mentally drained and physically ill, he was too weak and dizzy to work. Covey discovered Douglass lying on the ground, gave him a “savage kick in the side,” and told the slave to get up. Douglass tried several times to rise and was beaten harder with every failure, including a blow to the head with a hickory stick. He mustered up the courage to defy Covey and walked seven miles to his master’s house to relate what happened. The master turned him out and sent him back, leaving Douglass feeling powerless. He hid out for a day, then returned to Covey.

The following day changed Douglass’ life forever. Covey tried to tackle and beat the slave, but this time Douglass fought back. “At this moment – from whence came the spirit I don’t know – I resolved to fight; and, suiting my action to my resolution, I seized Covey by the throat.” Covey desperately solicited the help of another white man, whom Douglass kicked in the ribs and knocked down. Douglass told Covey, “Come what might . . . [you] used me like a brute for six months, and . . . I [am] determined to be used so no longer.” In the heat of the battle, Covey ordered another slave to intervene; the man refused and left the two to finish their battle. Douglass thought the fight lasted for nearly two hours until ending in a draw. As they stared at each other, panting frantically, Douglass noted with satisfaction that he had been neither bloodied nor whipped, but that he had bloodied Covey.

For the next six months, Covey did not touch Douglass in anger. Douglass even ignored Covey’s threats and warned the slave breaker that if he tried to strike Douglass again, he would get a worse beating than the first. For Douglass, it was the turning point in his life. He found his identity and recovered his dignity. “It rekindled the few expiring embers of freedom,” Douglass explained, “and revived within me a sense of my manhood. It recalled the departed self- confidence, and inspired me again with a determination to be free.”

With the restoration of his spirit, Douglass would no longer live in fear or submission. “It was a glorious resurrection, from the tomb of slavery, to the heaven of freedom. My long-crushed spirit rose, cowardice departed, bold defiance took its place; and I now resolved that, however long I might remain a slave in form, the day had passed forever when I could be a slave in fact.”

Douglass eventually did escape to the North and freedom through the Underground Railroad. He married and started earning his own money, keeping the fruits of his own labor. His work and marriage contributed to feeling the human dignity to which he was entitled and which he had won in his struggle with Covey. “I was now my own master. It was a happy moment, the rapture of which can be understood only by those who have been slaves. It was the first work, the reward of which was to be entirely my own.” Douglass was now a man with a strong sense of self-worth and identity who devoted himself to ensuring equal rights for all Americans in the abolitionist and women’s suffrage movements.