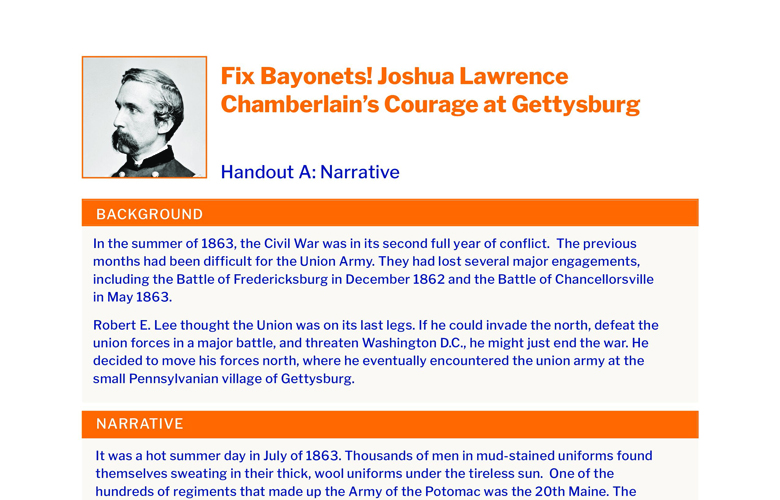 In the summer of 1863, the Civil War was in its second full year of conflict. The previous months had been difficult for the Union Army. They had lost several major engagements, including the Battle of Fredericksburg in December 1862 and the Battle of Chancellorsville in May 1863.

Robert E. Lee thought the Union was on its last legs. If he could invade the north, defeat the union forces in a major battle, and threaten Washington D.C., he might just end the war. He decided to move his forces north, where he eventually encountered the union army at the small Pennsylvanian village of Gettysburg.

It was a hot summer day in July of 1863. Thousands of men in mud-stained uniforms found themselves sweating in their thick, wool uniforms under the tireless sun. One of the hundreds of regiments that made up the Army of the Potomac was the 20th Maine. The Maine men and their colonel, Joshua Lawrence Chamberlain, had come a long way from their home to fight to preserve the Union.

Chamberlain was born in Brewer, Maine in 1828. His great-grandfather had fought in the American Revolution and his grandfather in the War of 1812. Before the war, Chamberlain had been a professor of rhetoric at Bowdoin College. He was fluent in nine languages−not counting English−and was reputed to have taught every curriculum at the college other than science and mathematics. He had strong anti-slavery sentiments and was eager to fight on behalf of his country when he was presented with the opportunity in 1862. His regiment soon marched south to join the war effort.

The 20th Maine saw combat across the Eastern Theater. At one point during the Battle of Fredericksburg, he was forced to spend the night between friendly and enemy lines amongst the bodies of the men who were killed during the day. Just a few weeks before the Battle of Gettysburg began, Chamberlain was promoted to commander of the 20th Maine regiment.

After months of campaigning, the regiment’s numbers had been greatly reduced due to combat and disease. On the eve of the battle, the 20th Maine was assigned a group of men who had attempted to mutiny from their previous regiment, the 2nd Maine.

Battle commenced at Gettysburg on July 1 when Union General John Buford’s cavalry moved to block Confederate General Robert E. Lee’s advance guards just outside of town. Fighting ebbed back and forth throughout the day as both North and South rushed up reinforcements. When the sun set, the Confederates were well installed in the town, with their lines stretching from north to southwest. The Union Army under General Meade had taken up positions to their east and south in a fishhook-like formation. Throughout the night, both armies moved to scout the surrounding countryside.

As dawn broke, the Union army braced for the coming Confederate assault. Fighting escalated throughout the day. As the Confederates advanced, they steadily moved further south, seeking out the flank, or end, of the Union line. Union commanders realized that the defense of the Union flank rested on holding Little Round Top, a hill at the extreme southern edge of the Union line.

The 20th Maine was tasked with defending Little Round Top. Chamberlain deployed his men along the southern rim of the hill, dug in, and prepared for the imminent Confederate assault. His superior officer ordered him to “hold at all costs.” Chamberlain’s men were all that prevented the Confederates from surrounding the Union army and routing it.

The men of the 20th did not have long to wait. Soon, gray uniforms were glimpsed advancing through the dense, green foliage. Chamberlain deployed his men in an arc following the curve of the hill, ordered his men to load their weapons, and prepared for the assault.

His 386 men were tired from the rushed march to the front the night before. Some of the soldiers he knew well, but the men of the 2nd Maine were strangers to him. Could they be trusted when called upon? What forces were arrayed against him? And what should happen if he failed to hold the position? All of these questions raced through the colonel’s mind as the battle began.

As Confederate troops advanced, Chamberlain’s men let loose a ferocious volley of fire, momentarily stopping the Southerners. Chamberlain remained cool by patrolling his line and watching for gaps. He soon realized that he had completely lost touch with his B Company, which had been sent out as skirmishers to slow the advancing Confederate lines. He assumed they were all lost.

As the battle continued, Chamberlain knew his time was running out. His men were low on
ammunition and suffered from the heat and overwhelming thirst. He knew they could not
hold much longer. Chamberlain had to make a decision.

If he stayed where he was and stood his ground, he knew his men would be unable to repulse another Confederate assault. However, retreating would be a violation of orders. Chamberlain decided to charge into the advancing Confederates and attempt to push them back down the hill. The colonel mustered his last ounce of courage.

Chamberlain called together his officers, told them the plan, and ordered them to prepare for a charge. The cry went down the line for bayonets. As the troops charged, the lost Company B stood up and fired into the shocked Confederates. Down the hill they went, blue chasing grey, gaining back the ground the Confederates had fought so desperately to win all afternoon. Chamberlain’s charge helped win the day for the Union.

The colonel continued to fight for the Union for the rest of the war. By the end, he had been wounded six times and reached the rank of brigadier general. However, it was the charge on Little Round Top that would give him everlasting fame. For this courageous action, he was later bestowed with the nation’s highest honor for bravery, the Medal of Honor.

Chamberlain’s charge was truly courageous; in a moment of great stress, he had to choose between holding the line and fleeing. Chamberlain had no knowledge of the enemy army marching against him or of what was happening on the rest of the battlefield. Courage was required to lead the charge, and Chamberlain did not back down.