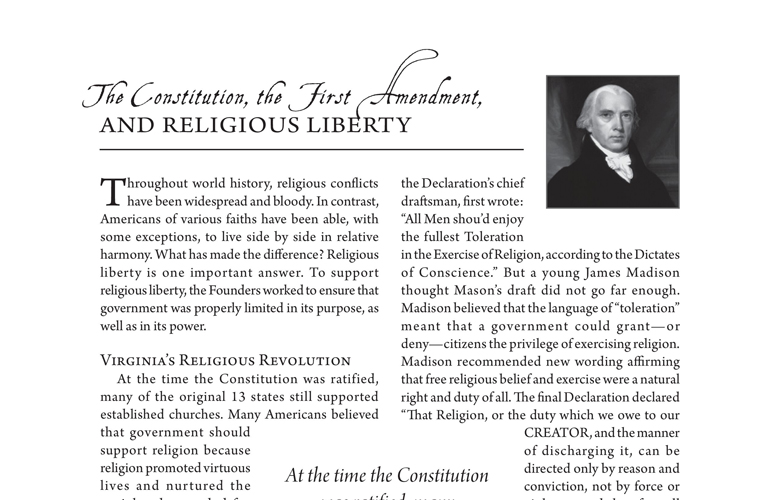 Throughout world history, religious conflicts have been widespread and bloody. In contrast, Americans of various faiths have been able, with some exceptions, to live side by side in relative harmony. What has made the difference? Religious liberty is one important answer. To support religious liberty, the Founders worked to ensure that government was properly limited in its purpose, as well as in its power.

At the time the Constitution was ratified, many of the original 13 states still supported established churches. Many Americans believed that government should support religion because religion promoted virtuous lives and nurtured the social order needed for self-government.

The Anglican Church was the established denomination in Virginia, though citizens could belong to any Christian church. Baptists were a fast-growing minority in Virginia. They did not believe that the government should have so much control over religion, and did not follow Virginia’s law that required a license to preach. As a result, Baptists were arrested, fined, and sometimes physically assaulted. Baptist preachers were whipped and dunked into mud to the point of near drowning. Baptists petitioned the Virginia government to disestablish the Anglican Church, and give all churches equal rights and benefits.

In 1776, the Virginia legislature adopted a Declaration of Rights, which included a provision dealing with religion. George Mason, the Declaration’s chief draftsman, first wrote: “All Men shou’d enjoy the fullest Toleration in the Exercise of Religion, according to the Dictates of Conscience.” But a young James Madison thought Mason’s draft did not go far enough. Madison believed that the language of “toleration” meant that a government could grant—or deny—citizens the privilege of exercising religion. Madison recommended new wording affirming that free religious belief and exercise were a natural right and duty of all. The final Declaration declared “That Religion, or the duty which we owe to our CREATOR, and the manner of discharging it, can be directed only by reason and conviction, not by force or violence; and therefore all men are equally entitled to the free exercise of religion, according to the dictates of conscience.…”

Religious dissenters, who were not members of the established church, thought the logic of the provision would place all churches on an equal footing before the law and lead to disestablishment. However, Virginians would continue to debate the implications of this provision for the next decade.

By the mid-1780s, taxes to support the Anglican Church had been suspended. In 1784, Patrick Henry proposed a general tax called the Bill Establishing a Provision for Teachers [Ministers] of the Christian Religion. Similar to some New England state laws, citizens would choose which Christian church received their support, or the money could go to a general fund to be distributed by the state legislature.

One notable supporter of the bill was George Washington. He wrote to James Madison: “No man’s sentiments are more opposed to any kind of restraint upon religious principles than mine are; yet I must confess, that I am not amongst the number of those who are so much alarmed at the thoughts of making people pay towards the support of that which they profess, if of the denominations of Christians; or declare themselves Jews, Mahomitans or otherwise, & thereby obtain proper relief.”

Opponents of the bill included James Madison. Madison wrote the Memorial and Remonstrance (1785) opposing the proposed tax. He asserted that religion could not be forced on people, and that state support actually corrupted religion. Government properly limited, rather, would promote a civil society in which people of different faiths could maintain their beliefs according to their own consciences. Madison’s side won the debate and Henry’s religious assessments bill did not pass.

The next year, the Virginia legislature passed The Virginia Statute for Establishing Religious Freedom, written by Thomas Jefferson. This 1786 law (still on the books in Virginia) banned government interference in religion and individual beliefs. Some, but not all, other states gradually followed the example of Virginia.

The Constitution and the First Amendment

At the Constitutional Convention in 1787, the delegates did not discuss basing the government on a religion. The only mention of religion in the body of the U.S. Constitution is to ban religious tests for national office in Article 6, Section 3. Federal employees and elected officials did not have to belong to a specific church or even be religious. This provision passed without debate.

The Constitution likely would not have been ratified without the promise of a Bill of Rights. Many states sent Congress proposed amendments that would add protections from the national government. Included in the proposals was protection for freedom of religion. Congress spent weeks debating different wordings. Finally, amendments were sent to the states for ratification. The religion clauses of the First Amendment read: “Congress shall make no law respecting an establishment of religion, or prohibiting the free exercise thereof…” The first part, known as the Establishment Clause, prohibited the national government from having anything to do with a national religion. Second, the Free Exercise Clause denied the national government the power to pass laws that stopped individuals from practicing their religions.

States did not have to disestablish their churches because the Constitution and Bill of Rights only applied to the national government. Some of the states maintained established churches and many maintained religious tests for office for many years.