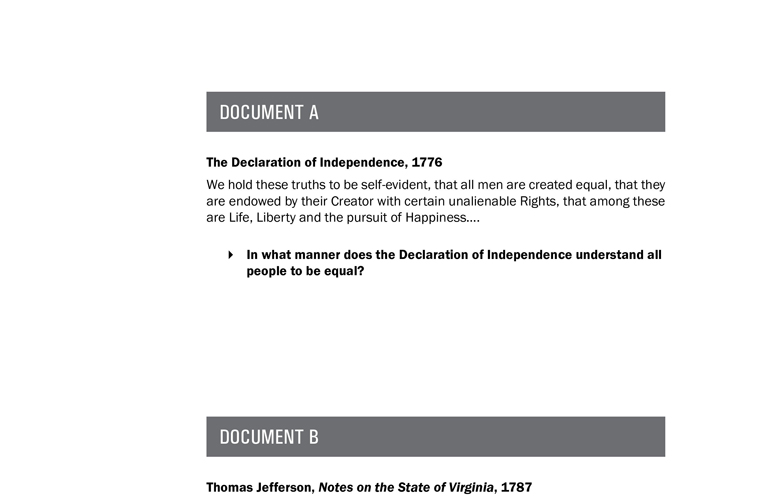 The Declaration of Independence, 1776

We hold these truths to be self-evident, that all men are created equal, that they are endowed by their Creator with certain unalienable Rights, that among these are Life, Liberty and the pursuit of Happiness….

Thomas Jefferson, Notes on the State of Virginia, 1787

Comparing [Negros] by their faculties of memory, reason, and imagination, it appears to me, that in memory they are equal to the whites; in reason much inferior, as I think one could scarcely be found capable of tracing and comprehending the investigations of Euclid; and that in imagination they are dull, tasteless, and anomalous…. This unfortunate difference of colour, and perhaps of faculty, is a powerful obstacle to the emancipation of these people.

The Constitution of the United States, 1789

Article I, Section 2, Paragraph 3: Representatives and direct Taxes shall be apportioned among the several States which may be included within this Union, according to their respective Numbers, which shall be determined by adding to the whole Number of free Persons, including those bound to Service for a Term of Years, and excluding Indians not taxed, three fifths of all other Persons.

Be assured that no person living wishes more sincerely than I do, to see a complete refutation of the doubts I have myself entertained and expressed on the grade of understanding allotted to them [Negroes] by nature, and to find that in this respect they are on a par with ourselves. My doubts were the result of personal observation on the limited sphere of my own State, where the opportunities for the development of their genius were not favorable, and those of exercising it still less so. I expressed them therefore with great hesitation; but whatever be their degree of talent it is no measure of their rights. Because Sir Isaac Newton was superior to others in understanding, he was not therefore lord of the person or property of others. On this subject they are gaining daily in the opinions of nations, and hopeful advances are making towards their re-establishment on an equal footing with the other colors of the human family.

Note: In 1839, Africans aboard the schooner Amistad revolted and demanded to be returned home. The captain instead brought them to New York, and the captives were to be sold as slaves. A legal battle followed over the question of the status of the captive Africans.

“The American Declaration of Independence Illustrated,” 1861 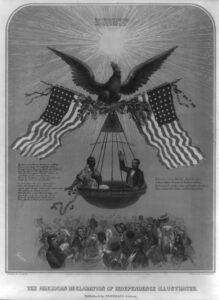 Section of The Fourteenth Amendment, 1868

Section. 5. The Congress shall have power to enforce, by appropriate legislation, the provisions of this article.

[Federal civil rights] legislation cannot properly cover the whole domain of rights appertaining to life, liberty, and property, defining them and providing for their vindication. That would … make congress take the place of the state legislatures and to supersede them.

It is absurd to affirm that, because the rights of life, liberty, and property … are by the [Fourteenth] Amendment sought to be protected against invasion on the part of the state without due process of law, Congress may, therefore, provide due process of law for their vindication in every case; and that, because the denial by a state to any persons of the equal protection of the laws is prohibited by the amendment, therefore congress may establish laws for their equal protection.

Transcript of the above judgment:

Homer Adolph Plessy, Plaintiff in Error
vs.
J. H. Ferguson, Judge of Section “A” Criminal District Court for the Parish of Orleans

In Error to the Supreme Court of the State of Louisiana

This cause came on to be heard on the transcript of the record from the Supreme Court of the State of Louisiana, and was argued by counsel.

On consideration whereof, It is now here ordered and adjudged by this Court that the judgment of the said Supreme Court, in this cause, be, and the same is hereby, affirmed with costs,

The object of the [Fourteenth] Amendment was undoubtedly to enforce the absolute equality of the two races before the law, but, in the nature of things, it could not have been intended to abolish distinctions based upon color, or to enforce social, as distinguished from political, equality, or a commingling of the two races upon terms unsatisfactory to either. Laws permitting, and even requiring, their separation, in places where they are liable to be brought into contact, do not necessarily imply the inferiority of either race to the other, and have been generally, if not universally, recognized as within the competency of the state legislatures in the exercise of their police power.…

We consider the underlying fallacy of [Plessy’s] argument to consist in the assumption that the enforced separation of the two races stamps the colored race with a badge of inferiority. If this be so, it is not by reason of anything found in the act, but solely because the colored race chooses to put that construction upon it.…

The argument also assumes that social prejudices may be overcome by legislation, and that equal rights cannot be secured to the negro except by an enforced commingling of the two races. We cannot accept this proposition. If the two races are to meet upon terms of social equality, it must be the result of natural affinities, a mutual appreciation of each other’s merits, and a voluntary consent of individuals.…

Legislation is powerless to eradicate racial instincts, or to abolish distinctions based upon physical differences, and the attempt to do so can only result in accentuating the difficulties of the present situation. If the civil and political rights of both races be equal, one cannot be inferior to the other civilly or politically. If one race be inferior to the other socially, the constitution of the United States cannot put them upon the same plane.

The white race deems itself to be the dominant race in this country. And so it is, in prestige, in achievements, in education, in wealth, and in power. So, I doubt not, it will continue to be for all time, if it remains true to its great heritage, and holds fast to the principles of constitutional liberty. But in view of the constitution, in the eye of the law, there is in this country no superior, dominant, ruling class of citizens. There is no caste here. Our constitution is color-blind, and neither knows nor tolerates classes among citizens. In respect of civil rights, all citizens are equal before the law. The humblest is the peer of the most powerful…. 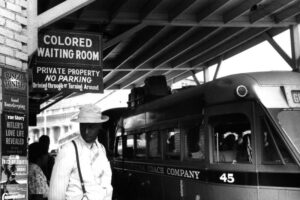 KEY QUESTION: Evaluate the degree to which each of the following informed the ruling in Plessy v. Ferguson: custom, precedent, and understanding of federalism.