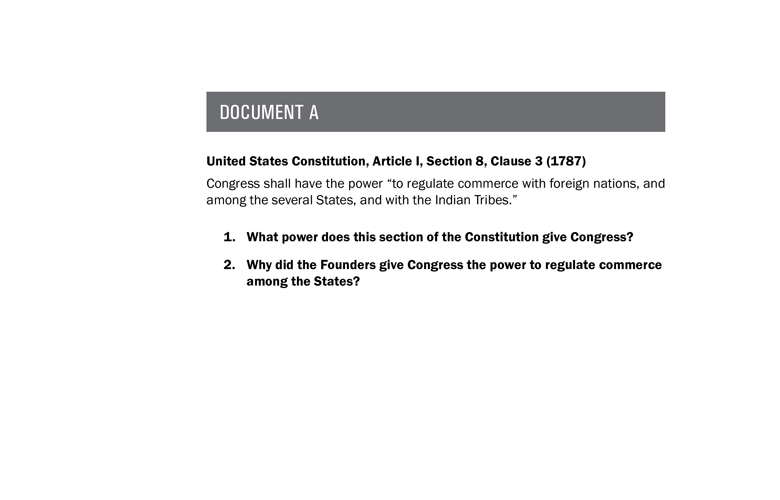 Congress shall have the power “to regulate commerce with foreign nations, and among the several States, and with the Indian Tribes.”

Commerce, undoubtedly, is traffic, but it is something more—it is intercourse. It describes the commercial intercourse between nations, and parts of nations, in all its branches, and is regulated by prescribing rules for carrying on that intercourse.…

But even if [an] activity be local, and though it may not be regarded as commerce, it may still, whatever its nature, be reached [regulated] by Congress if it exerts a substantial economic effect on interstate commerce, and this irrespective of whether such effect is what might at some earlier time have been defined as “direct” or “indirect.”

Under the theories that the Government presents … it is difficult to perceive any limitation on federal power, even in areas such as criminal law enforcement or education where States historically have been sovereign. Thus, if we were to accept the Government’s arguments [in support of the Gun-Free School Zones Act of 1990] we are hard-pressed to posit any activity by an individual that Congress is without power to regulate….

To uphold the Government’s contentions here, we have to pile inference upon inference in a manner that would bid fair to convert congressional authority under the Commerce Clause to a general police power of the sort retained by the States. Admittedly, some of our prior cases have taken long steps down that road, giving great deference to congressional action. The broad language in these opinions has suggested the possibility of additional expansion, but we decline here to proceed any further. To do so would require us to conclude that the Constitution’s enumeration of powers does not presuppose something not enumerated, and that there never will be a distinction between what is truly national and what is truly local. This we are unwilling to do.

…[W]e must ask whether Congress could have had a rational basis for finding a significant (or substantial) connection between gun-related school violence and interstate commerce…. Numerous reports and studies — generated both inside and outside government — make clear that Congress could reasonably have … thought that guns and learning are mutually exclusive. And, Congress could therefore have found a substantial educational problem — teachers unable to teach, students unable to learn — and concluded that guns near schools contribute substantially to the size and scope of that problem.…

The violence-related facts, the educational facts, and the economic facts, taken together, make this conclusion rational….

[A] holding that the particular statute before us [the Gun-Free School Zones Act of 1990] falls within the commerce power would not expand the scope of [the Commerce] Clause. Rather, it simply would apply preexisting law to changing economic circumstances. It would recognize that, in today’s economic world, gun-related violence near the classroom makes a significant difference to our economic, as well as our social, wellbeing.…

Upholding this legislation would do no more than simply recognize that Congress had a “rational basis” for finding a significant connection between guns in or near schools and (through their effect on education) the interstate and foreign commerce they threaten. For these reasons, I would reverse the judgment of the Court of Appeals. Respectfully, I dissent.

The proper resolution of the present case [an appeal against the Violence Against Women Act of 1994] is clear. Gender-motivated crimes of violence are not, in any sense of the phrase, economic activity … thus far in our Nation’s history our cases have upheld Commerce Clause regulation of intrastate activity only where that activity is economic in nature. …With its careful enumeration of federal powers and explicit statement that all powers not granted to the Federal Government are reserved, the Constitution cannot realistically be interpreted as granting the Federal Government an unlimited license to regulate.

…The case is made difficult by respondents’ strong arguments that they will suffer irreparable harm because, despite a congressional finding to the contrary, marijuana does have valid therapeutic purposes. The question before us, however, is not whether it is wise to enforce the statute in these circumstances; rather, it is whether Congress’ power to regulate interstate markets for medicinal substances encompasses the portions of those markets that are supplied with drugs produced and consumed locally. Well-settled law controls our answer. The CSA [Controlled Substances Act] is a valid exercise of federal power, even as applied to the troubling facts of this case.…

The similarities between this case and Wickard are striking. Like the farmer in Wickard, respondents are cultivating, for home consumption, a fungible commodity [a good that can be traded or exchanged] for which there is an established, albeit illegal, interstate market. …In Wickard, we had no difficulty concluding that Congress had a rational basis for believing that, when viewed in the aggregate, leaving home-consumed wheat outside the regulatory scheme would have a substantial influence on price and market conditions. Here too, Congress had a rational basis for concluding that leaving home-consumed marijuana outside federal control would similarly affect price and market conditions. …In both cases, the regulation is squarely within Congress’ commerce power because production of the commodity meant for home consumption, be it wheat or marijuana, has a substantial effect on supply and demand in the national market for that commodity.…

In assessing the scope of Congress’ authority under the Commerce Clause, we stress that the task before us is a modest one. We need not determine whether respondents’ activities, taken in the aggregate, substantially affect interstate commerce in fact, but only whether a “rational basis” exists for so concluding.

Respondents Diane Monson and Angel Raich use marijuana that has never been bought or sold, that has never crossed state lines, and that has had no demonstrable effect on the national market for marijuana. If Congress can regulate this under the Commerce Clause, then it can regulate virtually anything—and the Federal Government is no longer one of limited and enumerated powers. 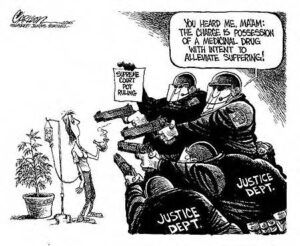 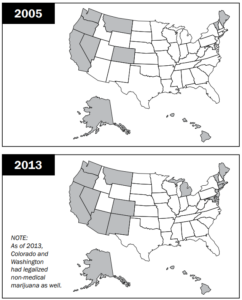