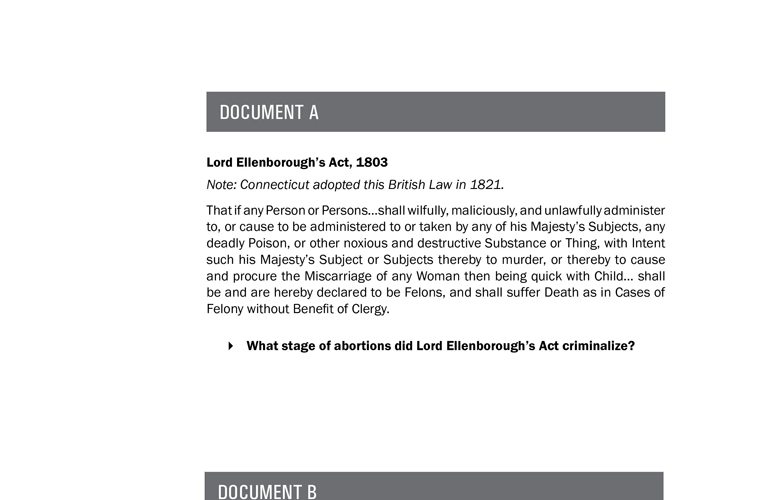 That if any Person or Persons…shall wilfully, maliciously, and unlawfully administer to, or cause to be administered to or taken by any of his Majesty’s Subjects, any deadly Poison, or other noxious and destructive Substance or Thing, with Intent such his Majesty’s Subject or Subjects thereby to murder, or thereby to cause and procure the Miscarriage of any Woman then being quick with Child… shall be and are hereby declared to be Felons, and shall suffer Death as in Cases of Felony without Benefit of Clergy.

If any person shall designedly administer to a pregnant woman or knowingly procure to be administered with her consent any drug or medicine, or shall use towards her any violence or means whatever externally or internally applied, and thereby procure an abortion, he shall be confined in the penitentiary not less than two nor more than five years; if it be done without her consent, the punishment shall be doubled. By “abortion” is meant that the life of the fetus or embryo shall be destroyed in the woman’s womb or that a premature birth thereof be caused.

Section of The Fourteenth Amendment, 1868

[N]o state shall … deprive any person of life, liberty, or property, without due process of law.

Various guarantees create zones of privacy. The right of association contained in the penumbra [arc] of the First Amendment is one, as we have seen. The Third Amendment in its prohibition against the quartering of soldiers “in any house” in time of peace without the consent of the owner is another facet of that privacy. The Fourth Amendment explicitly affirms the “right of the people to be secure in their persons, houses, papers, and effects, against unreasonable searches and seizures.” The Fifth Amendment in its Self-Incrimination Clause enables the citizen to create a zone of privacy which government may not force him to surrender to his detriment. The Ninth Amendment provides: “The enumeration in the Constitution, of certain rights, shall not be construed to deny or disparage others retained by the people.”

The Fourth and Fifth Amendments were described … as protection against all governmental invasions “of the sanctity of a man’s home and the privacies of life.” 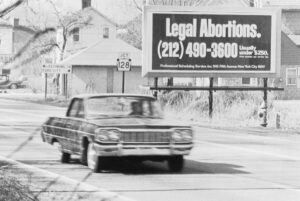 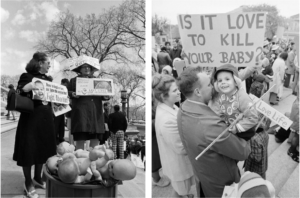 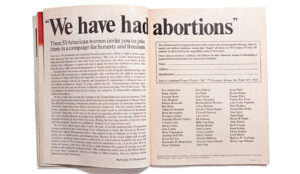 If the right of privacy means anything, it is the right of the individual, married or single, to be free from unwarranted governmental intrusion into matters so fundamentally affecting a person as the decision to whether to bear or beget a child.

It is … apparent that at common law, at the time of the adoption of our Constitution, and throughout the major portion of the 19th century … a woman enjoyed a substantially broader right to terminate a pregnancy than she does in most States today. At least with respect to the early stage of pregnancy, and very possibly without such a limitation, the opportunity to make this choice was present in this country well into the 19th century. Even later, the law continued for some time to treat less punitively an abortion procured in early pregnancy….

The Constitution does not explicitly mention any right of privacy. In a line of decisions, however … the Court has recognized that a right of personal privacy, or a guarantee of certain areas or zones of privacy, does exist under the Constitution….

This right of privacy, whether it be founded in the Fourteenth Amendment’s concept of personal liberty and restrictions upon state action, as we feel it is, or, as the District Court determined, in the Ninth Amendment’s reservation of rights to the people, is broad enough to encompass a woman’s decision whether or not to terminate her pregnancy….

[T]he right of personal privacy includes the abortion decision, but that this right is not unqualified and must be considered against important state interests in regulation.

The pregnant woman cannot be isolated in her privacy. …[I]t is reasonable and appropriate for a State to decide that at some point in time another interest, that of health of the mother or that of potential human life, becomes significantly involved.…

With respect to the State’s important and legitimate interest in the health of the mother, the “compelling” point, in the light of present medical knowledge, is at approximately the end of the first trimester.

With respect to the State’s important and legitimate interest in potential life, the “compelling” point is at viability. …If the State is interested in protecting fetal life after viability, it may go so far as to proscribe abortion during that period, except when it is necessary to preserve the life or health of the mother….

The [Texas] statute, that excepts from criminality only a lifesaving procedure on behalf of the mother, without regard to pregnancy stage and without recognition of the other interests involved, is violative of the Due Process Clause of the Fourteenth Amendment.…

I have difficulty in concluding, as the Court does, that the right of “privacy” is involved in this case.…

The fact that a majority of the States reflecting, after all, the majority sentiment in those States, have had restrictions on abortions for at least a century is a strong indication, it seems to me, that the asserted right to an abortion is not “so rooted in the traditions and conscience of our people as to be ranked as fundamental.” Even today, when society’s views on abortion are changing, the very existence of the debate is evidence that the “right” to an abortion is not so universally accepted as the appellant would have us believe.

The Court, for the most part, sustains this position: during the period prior to the time the fetus becomes viable, the Constitution of the United States values the convenience, whim, or caprice of the putative mother more than the life or potential life of the fetus; the Constitution, therefore, guarantees the right to an abortion as against any state law or policy seeking to protect the fetus from an abortion not prompted by more compelling reasons of the mother…. With all due respect, I dissent. I find nothing in the language or history of the Constitution to support the Court’s judgment….

The Court apparently values the convenience of the pregnant mother more than the continued existence and development of the life or potential life that she carries. Whether or not I might agree with that marshaling of values, I can in no event join the Court’s judgment because I find no constitutional warrant for imposing such an order of priorities on the people and legislatures of the States… This issue, for the most part, should be left with the people and to the political processes the people have devised to govern their affairs.

DIRECTIONS: Answer the Key Question in a well-organized essay that incorporates your interpretations of Documents A-K, as well as your own knowledge of history.