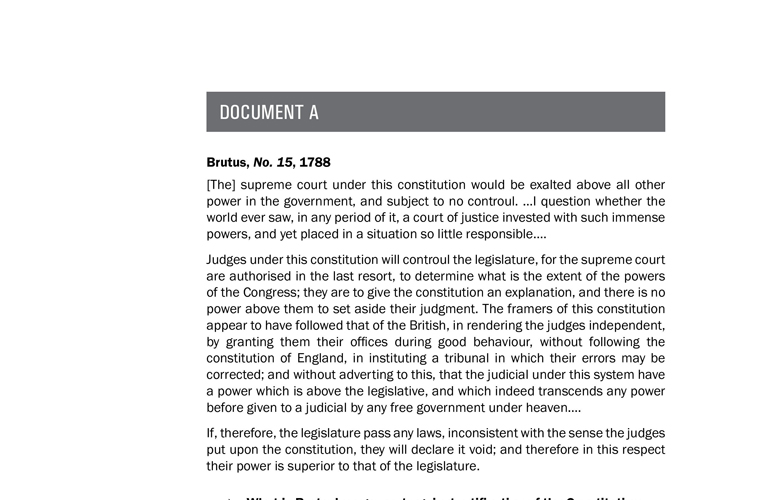 [The] supreme court under this constitution would be exalted above all other power in the government, and subject to no controul. …I question whether the world ever saw, in any period of it, a court of justice invested with such immense powers, and yet placed in a situation so little responsible….

Judges under this constitution will controul the legislature, for the supreme court are authorised in the last resort, to determine what is the extent of the powers of the Congress; they are to give the constitution an explanation, and there is no power above them to set aside their judgment. The framers of this constitution appear to have followed that of the British, in rendering the judges independent, by granting them their offices during good behaviour, without following the constitution of England, in instituting a tribunal in which their errors may be corrected; and without adverting to this, that the judicial under this system have a power which is above the legislative, and which indeed transcends any power before given to a judicial by any free government under heaven….

If, therefore, the legislature pass any laws, inconsistent with the sense the judges put upon the constitution, they will declare it void; and therefore in this respect their power is superior to that of the legislature.

Whoever attentively considers the different departments of power must perceive, that, in a government in which they are separated from each other, the judiciary, from the nature of its functions, will always be the least dangerous to the political rights of the Constitution; because it will be least in a capacity to annoy or injure them. The Executive not only dispenses the honors, but holds the sword of the community. The legislature not only commands the purse, but prescribes the rules by which the duties and rights of every citizen are to be regulated. The judiciary, on the contrary, has no influence over either the sword or the purse; no direction either of the strength or of the wealth of the society; and can take no active resolution whatever. It may truly be said to have neither FORCE nor WILL, but merely judgment; and must ultimately depend upon the aid of the executive arm even for the efficacy of its judgments.

There is no position which depends on clearer principles, than that every act of a delegated authority, contrary to the tenor of the commission under which it is exercised, is void. No legislative act, therefore, contrary to the Constitution, can be valid.

[T]he courts were designed to be an intermediate body between the people and the legislature, in order, among other things, to keep the latter within the limits assigned to their authority. The interpretation of the laws is the proper and peculiar province of the courts. A constitution is, in fact, and must be regarded by the judges, as a fundamental law. It therefore belongs to them to ascertain its meaning, as well as the meaning of any particular act proceeding from the legislative body.

[T]here is not a syllable in the plan under consideration which DIRECTLY empowers the national courts to construe the laws according to the spirit of the Constitution, or which gives them any greater latitude in this respect than may be claimed by the courts of every State. I admit, however, that the Constitution ought to be the standard of construction for the laws, and that wherever there is an evident opposition, the laws ought to give place to the Constitution.

Sections of Article III of the United States Constitution, 1789

Section 1. The judicial power of the United States, shall be vested in one Supreme Court, and in such inferior courts as the Congress may from time to time ordain and establish….

Section 2. The judicial power shall extend to all cases, in law and equity, arising under this Constitution, the laws of the United States, and treaties made, or which shall be made, under their authority… both as to law and fact, with such exceptions, and under such regulations as the Congress shall make.

The Supremacy Clause of the United States Constitution, 1789

The Supreme Court … shall have power to issue … writs of mandamus, in cases warranted by the principle and usages of law, to any courts appointed, or persons holding office, under the authority of the United States.…

That the several states who formed that instrument [the Constitution], being sovereign and independent, have the unquestionable right to judge of its infraction; and that a nullification, by those sovereignties, of all unauthorized acts done under colour of that instrument, is the rightful remedy.

The authority … given to the Supreme Court, by the act establishing the judicial courts of the United States, to issue writs of mandamus to public officers, appears not to be warranted by the Constitution….

Certainly all those who have framed written constitutions contemplate them as forming the fundamental and paramount law of the nation, and consequently the theory of every such government must be, that an act of the legislature, repugnant to the Constitution, is void….

It is emphatically the province and duty of the judicial department to say what the law is. Those who apply the rule to particular cases, must of necessity expound and interpret that rule. If two laws conflict with each other the courts must decide on the operation of each….

For intending to establish three departments, coordinate and independent, that they might check and balance one another, [the Constitution] has given, according to this opinion [Marbury v. Madison], to one of them alone the right to prescribe rules for the government of the others, and to that one, too, which is unelected by and independent of the nation. …The Constitution on this hypothesis is a mere thing of wax in the hands of the judiciary, which they may twist and shape into any form they please.

DIRECTIONS: Answer the Key Question in a well-organized essay that incorporates your interpretations of Documents A-K, as well as your own knowledge of history.

KEY QUESTION: Argue whether or not the Supreme Court should have the power to overturn unconstitutional federal laws.