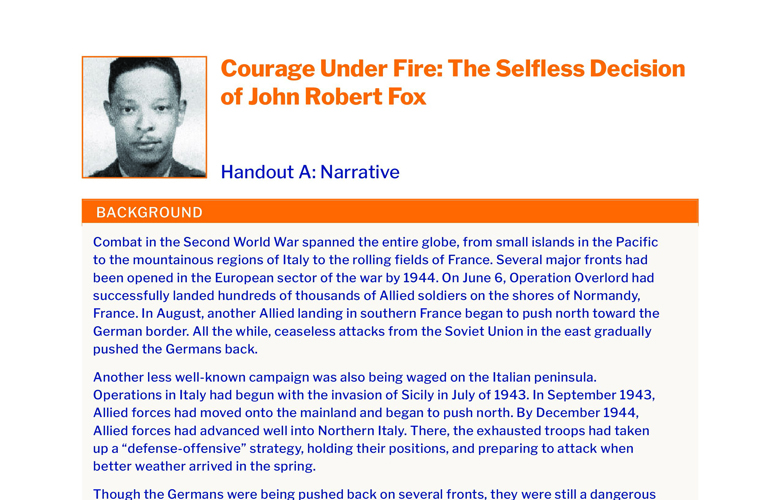 Combat in the Second World War spanned the entire globe, from small islands in the Pacific to the mountainous regions of Italy to the rolling fields of France. Several major fronts had been opened in the European sector of the war by 1944. On June 6, Operation Overlord had successfully landed hundreds of thousands of Allied soldiers on the shores of Normandy, France. In August, another Allied landing in southern France began to push north toward the German border. All the while, ceaseless attacks from the Soviet Union in the east gradually pushed the Germans back.

Another less well-known campaign was also being waged on the Italian peninsula. Operations in Italy had begun with the invasion of Sicily in July of 1943. In September 1943, Allied forces had moved onto the mainland and began to push north. By December 1944, Allied forces had advanced well into Northern Italy. There, the exhausted troops had taken up a “defense-offensive” strategy, holding their positions, and preparing to attack when better weather arrived in the spring.

Though the Germans were being pushed back on several fronts, they were still a dangerous foe. On December 16, Nazi forces launched a massive counter-attack in the Ardennes forest in France. While Allied soldiers repelled this attack, German troops were also active in Italy. One such incursion took place on Christmas Day, 1944. Thanks primarily to one brave soldier, the Nazi offensive was stopped in its tracks. That man was John Robert Fox.

John Robert Fox was born in Cincinnati, Ohio in May 1915. Fox was from an ordinary family in an ordinary city leading an ordinary life, yet he would grow up to embody the virtues of selfsacrifice and courage. He attended Wilberforce University and graduated in the spring of 1940 with a commission as a second lieutenant.

On Christmas night of 1944, John Robert Fox found himself in the cold, rocky, and overcast northern expanse of Italy’s Tuscany region. He volunteered to serve as a forward artillery observer as he and his unit moved forward. Allied forces had moved into a position behind the village of Sommocolonia, near the ancient medieval town of Barga. The town was on top of a rocky outcropping, which gave a commanding view of the surrounding countryside.

The village was a part of a massive defensive network that had been built by the Germans known as the Gothic line. Over 15,000 laborers had made an impressive 2,000 fortified positions and machine gun emplacements. These defenses created a formidable obstacle that stretched the width of northern Italy, cutting across the Apennines from the Liguria Sea to the Adriatic. It was the final major obstacle standing between the Allies and a push into the southern German frontier.

Fox’s battalion, about 1,000 men strong, had been ordered to hold the Germans along a 30 mile stretch of the front. This meant they were stretched precariously thin. Sensing an opportunity, the German commander in the area decided to launch a daring attack.

Fox had taken a position in a house with a good view of the surrounding countryside from which he could radio in coordinates for defensive artillery fire, should that become necessary. He went to sleep that Christmas night, cold but confident in his position.

The next morning, John awoke to find the situation completely changed. During the evening, Germans dressed in civilian clothing had infiltrated and taken significant portions of the town. In the early morning hours, a German artillery barrage was launched, precipitating an assault by uniformed German soldiers.

Knowing the situation was untenable, Allied forces began to retreat. Fox, however, knew that his position had a commanding view of the advancing Germans. He knew that if he stayed, he could call in defensive artillery fire that could delay the Germans long enough for the Allies to reorganize and defeat the attack. Fox would stay.

As the Germans advanced, Fox began to call down devastating and accurate barrages of artillery. As the Germans continued to push forward, Fox adjusted his fire, walking it closer and closer to his exposed position in the second story of a house. He knew the German attack was slowing. They had suffered heavy casualties and were growing tired. However, they continued to press on.

Finally, with the Germans nearly on top of him, John Robert Fox called in a final artillery barrage. This attack would come down right on top of his own position. When he called it in, the commander of the artillery battery hesitated, knowing that the call would mean John’s almost certain death. John insisted, knowing that this one final barrage was the only way to defeat the advancing enemy. The guns fired, with deadly accuracy.

When Allied Forces retook the town, they found Fox’s body amongst those of approximately 100 German soldiers. His sacrifice had halted the German advance. For his heroic and selfless actions, John Robert Fox was posthumously awarded the Distinguished Service Cross.

However, his story did not end there. John was a member of the 92nd Infantry Division. Also known as the buffalo soldiers, this was a segregated African American division that fought with great distinction throughout the Second World War. Due to continued racial tensions, the United States Army remained segregated until after World War II had concluded.

John Robert Fox had sacrificed himself for the Allied cause and to protect his men from an oncoming assault. He had done all this in the most heroic traditions of the United States military, and yet the nation’s highest honor, the Medal of Honor, had been denied to him. He had sacrificed himself for a country that, in many places, did not treat him as equal to whites. Despite this, John did not hesitate in calling in that strike, sacrificing himself for his country and fellow soldiers, irrespective of race, creed, or religion.

In 1997, the United States government reviewed many files of soldiers who had not been recognized as they should have been because of their race. John Robert Fox was awarded the Medal of Honor for his actions on January 13, 1997, with his widow accepting the Medal on his behalf. Finally, his bold and selfless actions had received the recognition that he deserved. A grateful nation decorated one of its bravest sons.