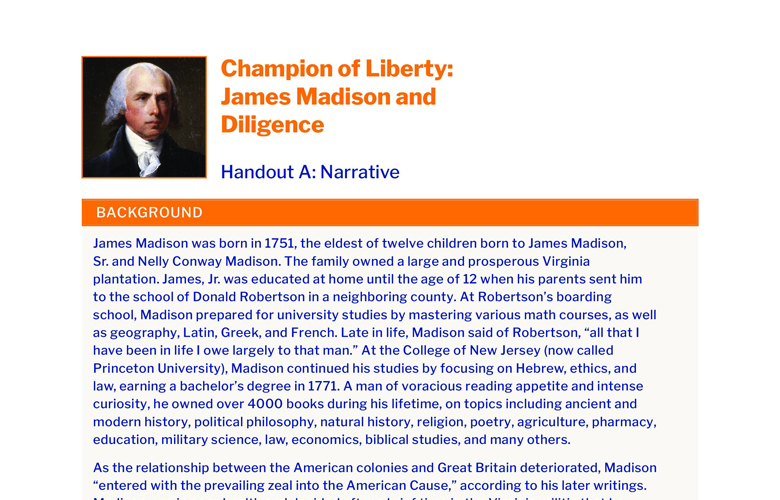 James Madison was born in 1751, the eldest of twelve children born to James Madison, Sr. and Nelly Conway Madison. The family owned a large and prosperous Virginia plantation. James, Jr. was educated at home until the age of 12 when his parents sent him to the school of Donald Robertson in a neighboring county. At Robertson’s boarding school, Madison prepared for university studies by mastering various math courses, as well as geography, Latin, Greek, and French. Late in life, Madison said of Robertson, “all that I have been in life I owe largely to that man.” At the College of New Jersey (now called Princeton University), Madison continued his studies by focusing on Hebrew, ethics, and law, earning a bachelor’s degree in 1771. A man of voracious reading appetite and intense curiosity, he owned over 4000 books during his lifetime, on topics including ancient and modern history, political philosophy, natural history, religion, poetry, agriculture, pharmacy, education, military science, law, economics, biblical studies, and many others.

As the relationship between the American colonies and Great Britain deteriorated, Madison “entered with the prevailing zeal into the American Cause,” according to his later writings. Madison was in poor health and decided after a brief time in the Virginia militia that he was not suited to military life. He pursued a political career, serving in the Orange County Committee of Safety, 1776 Virginia Convention, Continental Congress, Virginia House of Delegates, Confederation Congress, Federal Convention of 1787, United States Congress, Virginia House of Delegates, as Secretary of State, and as President of the United States. Though he relished his return to private life upon leaving the presidency in 1817, Madison participated in the 1829 convention to revise his state’s constitution.

He maintained a busy retirement, managing his large Virginia plantation, working on organizing his papers from the 1787 Constitutional Convention, and receiving many visitors at his Montpelier home. He died in 1836, the last man living of the Philadelphia Constitutional Convention’s delegates. Virginia Governor James Barbour eulogized his friend and neighbor by hoping that Madison’s legacy “may become a pillar of light by which some future patriot may re-conduct his countrymen to their lost inheritance.”

The political leaders of the thirteen states, coming from the tyranny of Great Britain, were determined to create not just a new government, but a new form of government. They attempted to embody the principles outlined in the Declaration of Independence in a system that could not violate the rights of the people. Though there was no government at the time which did so, the Continental Congress sought to build a regime based on the consent of the governed. They wanted to protect natural rights and create a system that prevented power from accumulating in the hands of a tyrant.

Members of the Second Continental Congress worked from 1776 to 1777 to produce a plan for such a government, and it took the states about four more years of debate before all of them approved it. In 1781, the same year as the last major battle of the American Revolution, the Articles of Confederation became the national compact binding together the United States of America. This document’s “firm league of friendship,” created a sovereign national union that prohibited the states from implementing their own foreign policies. However, the document did not grant Congress sufficient authority to carry out such functions as collecting taxes, regulating commerce among the states, or forcing citizens to pay their debts. Shays’ Rebellion, an armed uprising by farmers opposing high taxes, began raging in New England states, and the national government failed to raise troops in response.

Madison attended the Annapolis Convention to resolve some of the problems under the Articles, but only a few states bothered to send delegates to the failed meeting. The people’s delegates to Congress had acted on their fear of a central government that could abuse its powers and trample upon the rights of the people. The result was a political system in which jealousy and competition between the states caused the confederation to be a nation in name only. Only three years after the peace treaty ending the Revolutionary War, the country seemed to be collapsing.

In the fall of 1786, James Madison was deeply concerned about the state of national affairs. A frustrated Madison stated, “The crisis is arrived at which the good people of America are to decide the solemn question, whether they will by wise and magnanimous efforts reap the just fruits of that independence which they so gloriously acquired,” or whether “they will renounce the auspicious blessings prepared for them by the revolution.” He knew the republic’s survival was in jeopardy, and he was prepared to do his part in maintaining the liberty so recently secured in the American Revolution. Unwilling to sit idle while the experiment in freedom failed, he would take action.

Madison served in the Virginia House of Delegates, where he pressed that body to support a resolution for a convention in Philadelphia to strengthen the Articles. Then, he was elected to Congress, where he was instrumental in winning a resolution that endorsed the approaching convention in February 1787. His persistent efforts in persuading George Washington to attend the convention bore great fruit in lending legitimacy to the Constitution.

James Madison always diligently prepared for political conventions by studying ancient and modern history and thinkers, often thanks to the caseloads of books sent from Paris by his friend Thomas Jefferson. The year before, he had produced a lengthy document for the Annapolis Convention called Notes on Ancient and Modern Confederacies, and now in the spring of 1787, he analyzed the Articles of Confederation in Vices of the Political System. Madison’s study of political history and philosophy gave him great insights into the nature of human beings and government, thus sharpening his debate skills.

When he arrived at the Constitutional Convention in early May, James Madison began plotting strategy with members of the Virginia and Pennsylvania delegations. As a result, his brainchild, the Virginia Plan, dominated the discussions and shaped the outcome of the Constitution. Besides delivering many speeches, he diligently took notes and then re-copied them each night in a labor which, as he later wrote, “almost killed him.” The product was the only complete record of the debates of the Constitutional Convention and is of inestimable importance to historians.

Over the next year, Madison was one of the key proponents of the Constitution. This group came to be known as the Federalists. Madison wrote twenty-nine Federalist Papers essays, which continue to be read by scholars today for their explanation of the Constitution. In these, he sought to persuade the opponents of the Constitution—known as Anti-Federalists—to support the proposed form of government. Madison’s long study of history and politics, and his note-taking at the Constitutional Convention, gave him the knowledge to write the essays with co-author Alexander Hamilton at a frenetic pace of nearly 1,000 words a day (while also serving in Congress). In June 1788, Madison defended the Constitution in the Virginia Ratifying Convention, where the Federalists barely won ratification by a handful of votes. Madison was also a strategist and correspondent behind the scenes to help win ratification in other key states such as New York.

Although Madison lost a bid for the U.S. Senate, he did not give up and defeated James Monroe for a seat in the House of Representatives. In the First Congress, he sought to fulfill a promise by the Federalists during the ratification debate to draw up a Bill of Rights to protect essential liberties. Although most congressmen wanted to move on to what they considered more pressing business, Representative Madison became the firmest advocate for the Bill of Rights. He helped reconcile the hundreds of different proposals for amendments and eventually pushed them through the Congress. They were ratified by the states in 1791 to become the first ten amendments to the U.S. Constitution.

While other Founders played significant roles in the creation of the Constitution and its ratification, no one pursued the goal of strengthening the American political system as diligently as James Madison. He constantly kept the goal in mind and worked hard to achieve it. Madison could have left some of the hard work and responsibility to others, but he exhibited great leadership and persevered through many difficulties. The creation and ratification of the Constitution and Bill of Rights were not inevitable and almost met defeat at several key moments. However, James Madison’s diligent preparation and unremitting effort to face those challenges helped him emerge victorious as he helped to create the lasting American constitutional system, earning him the title of “Father of the Constitution.”