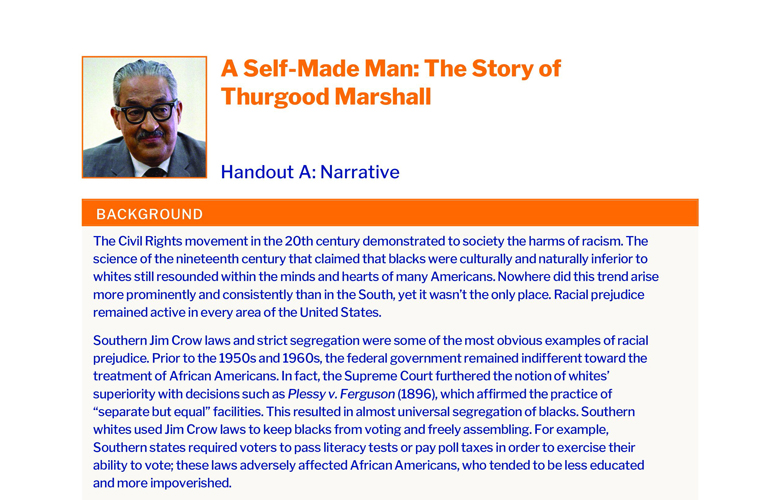 The Civil Rights movement in the 20th century demonstrated to society the harms of racism. The
science of the nineteenth century that claimed that blacks were culturally and naturally inferior to whites still resounded within the minds and hearts of many Americans. Nowhere did this trend arise more prominently and consistently than in the South, yet it wasn’t the only place. Racial prejudice remained active in every area of the United States.

Southern Jim Crow laws and strict segregation were some of the most obvious examples of racial
prejudice. Prior to the 1950s and 1960s, the federal government remained indifferent toward the treatment of African Americans. In fact, the Supreme Court furthered the notion of whites’
superiority with decisions such as Plessy v. Ferguson (1896), which affirmed the practice of
“separate but equal” facilities. This resulted in almost universal segregation of blacks. Southern whites used Jim Crow laws to keep blacks from voting and freely assembling. For example, Southern states required voters to pass literacy tests or pay poll taxes in order to exercise their ability to vote; these laws adversely affected African Americans, who tended to be less educated and more impoverished.

Though fewer laws were subjecting African Americans to direct racism in the North, segregation
still existed. Schools were strictly segregated and ethnic intermixing was all but forbidden. This was the atmosphere that shaped Thurgood Marshall.

One hundred and thirty-two years after the Founding Fathers ratified the Declaration of Independence, the “inalienable” rights of African Americans were still being denied. On July 2, 1908, Thurgood Marshall, one of the nation’s greatest proponents of civil rights, was born in Maryland.
Marshall’s parents instilled the value of the Constitution and the rule of law in their son, who used this inspiration to forge a future for himself. He worked hard for everything that he received, and his experiences, character, and closest relationships prodded him toward success, a route that would be filled with obstacles.

Being an African American in the early twentieth century meant exclusion from numerous activities. For instance, when Marshall applied to the University of Maryland, he was quickly denied. Instead, he attended an all-black institution, Lincoln University, where he sometimes neglected his studies in favor of momentary thrills. Marshall chose to define his life in terms of the here and now rather than forming an identity as a hard-working individual. With no inherited opportunities, Marshall had to make a future for himself—a reality he soon realized.

After Marshall met and married Vivian Burey, he began to take himself and his studies seriously. He graduated from Lincoln with honors before going on to law school at Howard University, where he also graduated with honors. There, he developed a passion for opposing segregation and its proponents.

As a lawyer in his mid-twenties, Marshall set his eyes on reforming segregation policies in
higher education. His first major victory came in Murray v. Pearson (1936). This case ended the University of Maryland’s policy of excluding blacks from admittance. In that same year, the National Association for the Advancement of Colored People (NAACP) hired Marshall as a litigator. In his first Supreme Court case, Chambers v. Florida (1940), Marshall defended four African American men who had been convicted of murdering a white man. Marshall successfully argued that the police used fear and coercion to obtain a confession from the men.

He would go on to win 28 more cases before the Supreme Court, using his legal expertise and
oratory skills to promote equal treatment of all ethnic groups. Arguing before the Supreme Court in Brown v. Board of Education (1954), Marshall played a significant role in reversing the practice of segregation by ending “separate but equal” policies. His successful arguments before the nation’s highest court opened the door to even greater opportunities for himself and blacks throughout the United States. Every victory further cemented Marshall’s identity as a defender of human dignity.

In 1961, President Kennedy appointed Marshal to a federal judgeship. Later, in 1965, President
Johnson appointed him Solicitor General. Marshall was the first African American in this role, but he would climb even higher. In 1967, President Johnson appointed him to the Supreme Court,
where he served until 1991. As a justice, Marshall championed equal rights for not only blacks, but also women, the disabled, and the poor. He understood that all humans possess the same inherent dignity and he fought to see the day when a person’s color, gender, and social status would not affect their access to equality of opportunity.

Marshall’s dedication to “doing what you think is right” guided his judicial decisions and his
exceptional character and ambition molded American law and society. Marshall formed his identity around the desire to end segregation and his ultimate success positively affected countless Americans.