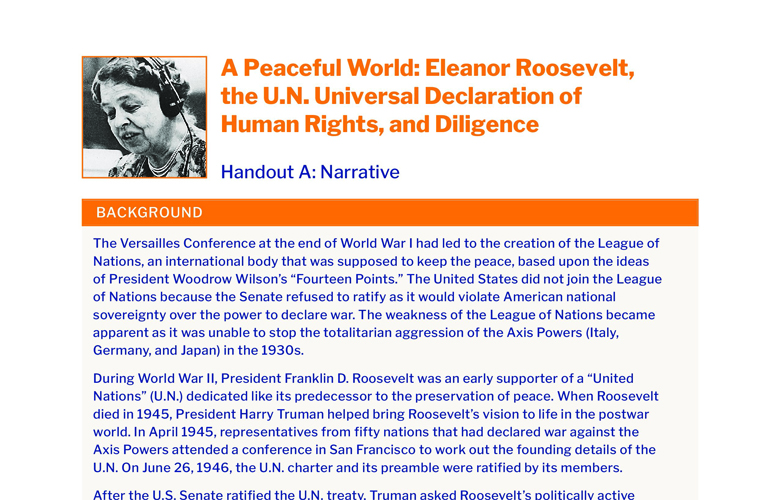 During World War II, President Franklin D. Roosevelt was an early supporter of a “United Nations” (U.N.) dedicated like its predecessor to the preservation of peace. When Roosevelt died in 1945, President Harry Truman helped bring Roosevelt’s vision to life in the postwar world. In April 1945, representatives from fifty nations that had declared war against the Axis Powers attended a conference in San Francisco to work out the founding details of the U.N. On June 26, 1946, the U.N. charter and its preamble were ratified by its members.

After the U.S. Senate ratified the U.N. treaty, Truman asked Roosevelt’s politically active wife, former First Lady Eleanor Roosevelt, to be a delegate to the first General Assembly meeting in London. Roosevelt accepted, saying, “I want to try for a peaceful world.” She spent the next two years diligently serving on the Human Rights Commission that drafted the U.N. Declaration of Universal Rights.

When President Harry Truman asked sixty-two-year-old former First Lady Eleanor Roosevelt to serve as a delegate to the United Nations’ General Assembly to aid in its organization, she was humbled and did not feel up to the task. “How could I be a delegate to help organize the United Nations when I have no background or experience in international meetings?” she asked the president. Truman was convinced she had plenty of political experience and persuaded her to accept. She was also driven by a desire to contribute to making the world a better place after two destructive world wars and horrific genocides.

Roosevelt elaborated on the reasons she accepted the position. First, she stated, “It seemed I might be able to use the experiences of a lifetime and make them valuable to my nation and to the people of the world.” Second, she wanted to fulfill her husband’s hope that “out of the war, an organization for peace would develop.” Lastly, she believed that “women might have a better chance to bring about the understanding necessary to prevent future wars if they would serve in sufficient numbers in these international bodies.” Although Roosevelt was a little flustered by a painful confirmation process by the Senate for her appointment, she accepted and diligently pursued her purpose of helping to organize the U.N. and promoting peace and human rights.

In early January 1946, Roosevelt sailed for London to attend the first meeting of the U.N. General Assembly. She boarded an ocean liner that was still painted in camouflage gray for transporting troops during the war. Roosevelt donned her heavy coat with her trademark fox furs over her shoulders as she embarked for the Atlantic crossing. From her cabin, she wrote, “Though the responsibility seems great, I’ll just do my best and trust in God.”

During her time meeting the other delegates at the General Assembly meeting she made quite an impression, though she was not always confident. “I walked on eggs…If I failed to be a useful member, it would not be considered merely that I as an individual had failed but that all women had failed, and there would be little change for others to serve in the near future.” Upon her return to New York, she was asked by the Economic and Social Council of the U.N. to serve on a small commission to make recommendations on the structure and function of a permanent Human Rights Commission. She readily agreed, and her most important work on the commission would be the creation of an international bill of human rights.

Roosevelt was elected the chair of the commission that met from April 29 to May 20, 1946, at Hunter College in New York. By June, the commission members had created a Commission on Human Rights with five permanent members (the United States, the Soviet Union, the United Kingdom, France, and China), and thirteen rotating members for three-year terms. Roosevelt reported their shared outlook, stating, “Many of us thought the lack of standards for human rights the world over was one of the greatest causes of friction among nations, and that recognition of human rights might become one of the cornerstones on which peace could eventually be built.”

The Commission on Human Rights was tasked with preparing an international bill of rights and held its first session at an old factory with few amenities at Lake Success in Long Island, New York in January 1947. Roosevelt was quickly chosen to chair the commission because, as one of the participants stated, “The most important person in the United Nations human rights program was already Eleanor Roosevelt.” Sixteen countries were represented on the commission.

The meetings inside the old, dingy building were rather bitter as philosophical divisions became immediately apparent. They argued over the nature of God and the nature of man and whether rights were individual or collective. The most evident divisions were between the Soviet communist bloc and the capitalist nations of the West. Roosevelt weighed in on the chilly morning of February 5. She stated, “It seems to me that in much that is before us, the rights of the individual are extremely important. It is not exactly that you set the individual apart from his society, but you recognize that within any society the individual must have rights that are guarded.” The communists, however, rejected the ideas of individual rights in favor of the collective rights provided by the state.

The following day, the youngest delegate and secretary of the commission, Lebanon’s Charles Malik, contested the Soviet view and asserted that the danger in the postwar world was “not that the state is strong enough…but that social claims are in danger of snuffing out any real personal liberty.” Roosevelt went on record as saying that she agreed “wholeheartedly” with Malik.

Roosevelt was a strong supporter of practical social and economic rights and equality. Shortly after WWII she had written, “Freedom without bread…has little meaning. My husband always said that freedom from want and freedom from aggression were twin freedoms, which had to go hand in hand.” She said she wanted to keep the spirit of the New Deal alive. The communist representatives wanted to focus exclusively on these social rights rather than individual rights, whereas Roosevelt and the other delegates sought a balance.

Roosevelt was then chosen along with Malik, P.C. Chang, a playwright and diplomat from China, and the Canadian international law expert John Humphrey to form a subcommittee to draft the international declaration of human rights. Roosevelt invited them over to tea at her apartment in New York, and the highly-educated men launched into a heated debate over their work of defining rights while she filled their empty cups repeatedly and enjoyed the lively, high-minded discussion on the ideas of Confucius, St. Thomas Aquinas, and other important philosophers.

Much like the committee that appointed Thomas Jefferson to draft the Declaration of Independence, they asked Humphrey to study the world’s constitutions and draft a declaration of universal human rights. He worked on it diligently for three days and nights secluded in his room. When other members of the commission complained that the subcommittee was too small and exclusive, Roosevelt conceded and added five members. However, they used Humphrey’s handiwork as their working draft. When they met at Lake Success again on June 9, Roosevelt reminded them that they were drafting a “preliminary document” that other committees, the member nations, and the General Assembly would make significant alterations to. Additionally, it was a reminder that they did not need to get bogged down in philosophical speculations about human nature.

On November 29, Roosevelt set off for Geneva, Switzerland by plane to present the declaration of universal human rights to the Human Rights Commission. The commission unanimously endorsed the declaration by a vote of 13-0 with the Soviet Union and its puppet states abstaining. In December 1948, the diligence of Eleanor Roosevelt and the rest of the council was rewarded when the General Assembly met in Paris and passed the U.N. Universal Declaration of Human Rights without a single dissenting vote. Roosevelt dedicated these postwar years to the protection of human rights for all people around the globe and achieved that goal through hard work, dedication, and diligence.