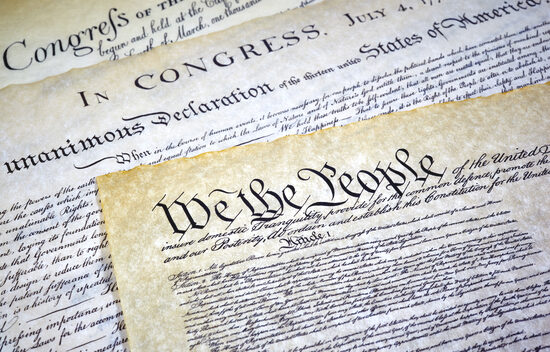 The foundations of the government of the United States are oriented around the ideas of liberty and equality as articulated in the natural rights tradition of John Locke and others. This tradition holds that, by nature of their existence, human beings possess rights, independent of any governing or societal power. In the maintenance of these rights natural rights thinkers saw the greatest possibility for individuals to flourish through the freedom to direct their own lives. The people maintain their freedom and rights through formal institutions of government and informal community traditions and institutions. This maintenance requires the people to be vigilant and informed in order to ensure that these institutions are directed towards their right ends. It was an understanding of these fundamental principles that informed the design of the United States Constitution and Bill of Rights. The principles contained below define the protections built into the Constitution for this purpose. In understanding these principles, We the People are better able to protect and advance freedom and opportunity for all.

The American regime is built upon a philosophical foundation that makes an argument for a constitutional republic. The graphic above outlines the logic of that argument. The list is not comprehensive but provides a starting place for the investigation of the American experiment in self-government.

These are the philosophical principles which provide the focus for the governing structure of the United States.

Natural/Inalienable Rights: Rights which belong to humans by nature and can only be justly abridged through due process. Examples are life, liberty, and property.

Liberty: The power to think and act as one sees fit without restraint except by the laws of nature and interfering with someone else’s rights.

Equality: All individuals have the same claim as human beings to natural rights and treatment under the law.

Justice: Having a political order that protects the rights of all equally and treats everyone equally under the law.

These principles of republicanism provide the foundations upon which the sovereignty of the people within government is maintained.

Majority Rule/Minority Rights: Laws are made with the consent of the majority but do not infringe on the inalienable rights of the minority.

Consent of the Governed/Popular Sovereignty: The power of government comes from the people.

Democracy: A form of government in which ultimate authority is based directly on the will of the people.

Republic: A constitutional form of government with elected representatives who represent and “refine and enlarge” the will of the people.

To keep the governing power to its proper scope, government must be limited and provide recourse for citizens to be protected from arbitrary power.

Rule of Law: Government and citizens all abide by the same laws regardless of political power. Those laws must be stable and justly applied.

Due Process: The government must apply law and rules equally to all people.

To keep government within these limited bounds, there must be rules that bind both individual citizens and government action.

Separation of Powers: The branches of government each have powers to limit the powers of the other branches and to prevent any branch from becoming too powerful.

Checks and Balances: Constitutional powers are distributed among the branches of government allowing each to limit the application of power of the other branches and to prevent expansion of power of any branch.

Federalism: The national and state governments have a balance of separate and shared powers. The people delegate certain powers to the national government, while the states retain other powers; and the people retain all powers not delegated to the governing bodies.

As a final recourse against government abuse, the Founding generation codified a list of rights that they believed were essential to the maintenance of their constitutional governing structure.

Freedom of Religion: The right to choose one’s religion or form of worship, if any, without interference; freedom of conscience.

Freedom of Speech, Press, and Assembly: The right to express one’s opinions freely, orally or in writing and the right to gather with others in groups of one’s choice without arbitrary or unreasonable restrictions.

Private Property: The natural right of all individuals to create, obtain, and control their possessions, beliefs, faculties, and opinions as well as the fruits of their labor.

The maintenance of our republican government requires the people be vigilant, informed, and virtuous, ensuring that governing institutions are directed towards their right ends. Good habits, or virtues, promote self-government and help guarantee that communities orient themselves towards advancing the spirit of a common purpose. A list of those civic virtues are provided here.

Courage: The ability to take constructive action in the face of fear or danger. To stand firm as a person of character and do what is right, especially when it is unpopular or puts one at risk.

Humility: A recognition that one’s ignorance is far greater than one’s knowledge. Putting others ahead of ourselves in thought, word, and deed. A willingness to give others credit and to admit when we are wrong.

Justice: Upholding of what is fair and right. Respecting the rights and dignity of all.

Moderation: The avoidance of excess or extremes.

Prudence: Practical wisdom that applies reason and other virtues to discern right courses of action in specific situations.

Respect: Regard for and defending the equal rights and inherent dignity of all human beings, including oneself.

Responsibility: Acting on good judgment about what is right or wrong even when it is not popular. Individuals must take care of themselves, their families, and their fellow citizens/others in civil society and a republic and be vigilant to preserve their own liberty and the liberty of others.

Cowardice: Failing to take constructive action in the face of fear or danger. A lack of firmness or conviction.

Contempt: Showing disregard, disdain, or lack of consideration for someone or something worthy of action or admiration.

Immoderation (Extremism): Acting in excess or to an extreme. Lacking restraint.

Self-Deception: Acting on a belief that a false idea or situation is true. Being deluded or deceived by ideas that endanger the humanity of others and movements that are unjust.

Injustice: To harm others by applying unequal rules and damaging another’s inalienable rights and dignity.

Hubris: To have excessive pride, vanity, and arrogance that usually leads to a tragic fall.

Imprudence: Acting without care or thoughtfulness for consequences. Exercising lack of wisdom appropriate to situations.

Irresponsibility: Acting on poor judgment or failing the trust others place in you.