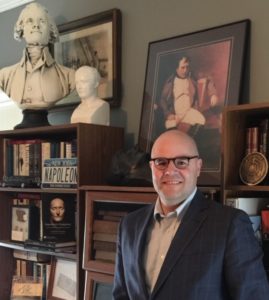 In a testament to the generational impact that teachers can have, when asked who one of his greatest influences was, Tom Barden pointed to Victor Harris, his high school social studies teacher (no relation to Victor Harris, a previous BRI Spotlight Educator). “Mr. Harris taught us history through the power of the narrative,” Tom says, ” which made the class interesting and we were hanging on every word.”

These days, as an AP Government and Politics and AP U.S. History teacher himself at Marcus Whitman High School in Rushville, New York, Tom finds one of his biggest challenges is getting students interested in reading primary and secondary sources that are longer in length. “They now live in a world where they look for information in apps, brief statements on web pages, or even through texts.”

Still, the rewards outweigh the challenges for Tom, who was selected Teacher of the Year by his students for the year 2015-2016 school year. His favorite era to teach is the Founding Period of 1789-1808. “Many of the political debates and partisanship of today can easily be traced back to this period and in many ways, the Founding Period was more volatile,” notes Tom.

In addition to classroom teaching, somehow Tom found time to write a book. Napoleon’s Purgatory: The Unseen Humanity Of The “Corsican Ogre” In Fatal Exile was published through Vernon Press in 2017. It is a history text that examines the human side of Napoleon Bonaparte during his final years in exile on the island of St. Helena from 1815-1821.