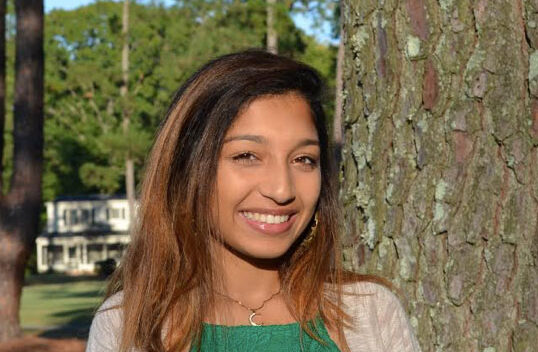 Rebecca Chemmanam loves to question assumptions and engage in debate on a wide variety of subjects. It’s no surprise then that she was one of the most recent winners of our biweekly Think the Vote debate contest. A senior at J.H. Rose High School in Greenville, North Carolina, Rebecca says that her father is her biggest influence, keeping her debating skills sharp by “entertaining her many questions and challenging her opinions.”

Her favorite classes are AP Comparative Government and Journalism, but she is also a clear lover of U.S. History. When asked what figure from history she would want to follow on social media if they were around today, she replied, “Someone from the lost colony [of Roanoke] to figure out where they went.”

She keeps a busy schedule in addition to her studies, playing tennis, serving as senior class president on SGA, and taking part in mock trial as her team’s co-captain.

There are many issues of importance to Rebecca, but health care reform, campaign finance reform, and “collective responsibility within the government” are her top three. She loves politics and the idea of public service, and plans on making that and computer science her majors in college. Her ultimate goal is to go to law school, practice law, and one day run for public office.