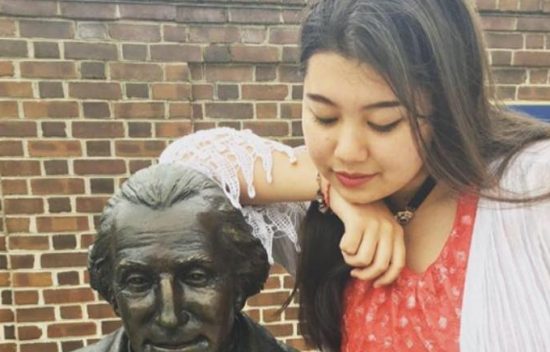 2021 We the Students Honorable Mention winner Prairie Kaya made a point of pursuing her array of passions, ranging from drama to history while attending Kingfisher High School in Oklahoma. As a graduating senior, she had the opportunity to partake in numerous activities throughout her four years including the Oklahoma Summer Arts Institute for Acting and Creative Writing as well as her school’s newspaper and drama department. Prairie’s appreciation for the arts is apparent through these involvements, but also through her admiration for Hamilton and In the Heights playwright, Lin-Manuel Miranda. Prairie notes how Miranda’s “ability to tell sincere, affecting stories has been a testament to human creativity and has inspired her to learn all that I can about my own passions.”

Prairie’s interest in the intersection of history and drama is also reflected in her favorite classes; English and history. Her favorite figure in the latter subject is Eleanor Roosevelt. Prairie’s high regard for Eleanor Roosevelt stems from her belief that Roosevelt served as “a role model of human rights activism whose positive influence is still felt in modern times.”

There are many systemic issues that are important to Prairie as a young voter, but one that is particularly pressing to her is climate change and the protection of the environment. This is followed by the regulation of constantly expanding, internet spaces which Prairie feels will “define our collective future.” Finally, she cares deeply about ensuring fair employment practices for workers.

Prairie’s future plans include continuing her passion for drama and history at the University of Oklahoma by using theatre and art as a means of “contributing to the wider spheres of historical knowledge in the United States.”