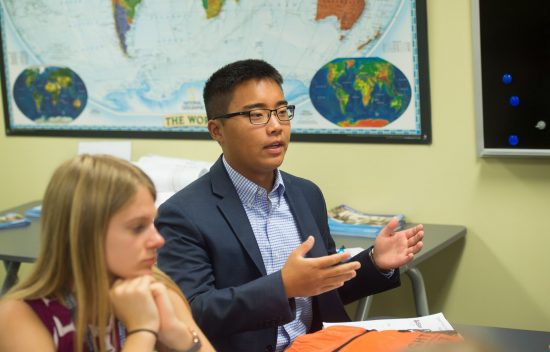 Adopted from Korea when he was four months old, Michael Cerulli obviously doesn’t remember anything about the trip across the world to his new country. The 2018 Constitutional Academy participant and rising senior at Trumbull High School in Trumbull, Connecticut did note, however, that the last day of that year’s Academy, July 13, 2018, was the 17th anniversary of that fateful trip.

“There is a picture in my scrapbook of the entrance to the [international terminal] at JFK Airport,” Mike shared on his last day at Constitutional Academy, “and it says in multiple languages, including Korean, something to the effect of ‘Through these doors, you will find America.’ I found it to be profound to think about that day 17 years ago because I don’t think I have found more of my country in my entire life than what I have found over these last six days [at Constitutional Academy].”

In many ways, Mike is an example of the kind of young person drawn to this weeklong experience in our nation’s capital. He is active at his school, serving on the student council, as captain of the varsity golf team, and participating in Model Congress. Mike also serves as the representative of the student body of Trumbull High School on the Board of Education for the town of Trumbull, Connecticut.

Mike is very engaged on issues related to youth voter outreach, foreign affairs, and national security. He is also a reporter for the Trumbull Times, and his work has been featured in the Connecticut Post. In his free time, Mike enjoys playing guitar and flying airplanes. In 2017, he earned his license as a student pilot.

In sharing his final reflections on the time spent with his peers during Constitutional Academy and the respect he had gained for the opinions of all the other students, Mike offered up this quote from George Washington:

“Associate yourself with men of good quality if you esteem your own reputation; for ’tis better to be alone than in bad company.”