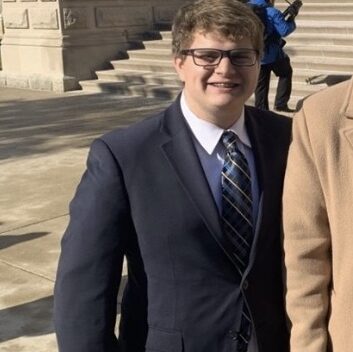 Kyle Feldkamp, a member of BRI’s student network, is deeply passionate about civic engagement. A junior from Saint Joseph High School in Granger, Indiana, Kyle serves as secretary of the Indiana Legislative Youth Advisory Council and, remarkably, he is already making a bid for political office, running to become a state delegate for the Democratic Party this election cycle. Kyle is also active in student government, NHS, mock trial, tennis, and Fed Challenge at his school, on top of his involvement in the Youth Leadership South Bend/Mishawaka program.

Considering his clear interests in leadership and politics at such a young age, it is not surprising that Kyle identifies general youth advocacy and civic education as two of the most important issues to him, as he claims that “[i]t is important to have effective programs and curriculum to establish educated voters, and to increase voter participation.” Alongside these broad issues, he recognizes climate change as a crucial problem that must be addressed for the benefit of ourselves and posterity.

In the classroom, Kyle is an eager student of all things history. He particularly enjoys American history, and he is excited to take AP Government next school year. In line with this interest of his, Kyle idolizes important figures like President John F. Kennedy; when asked what person from history he would want to follow on social media if they were still alive, Kyle cited JFK, claiming that his tweets “would be the most inspirational and effective uses of the character limits.” Likewise, Kyle credits former Indiana congressional candidate and community activist Lynn Coleman as a major source of personal inspiration and as “the true definition of a servant leader.” In the future, Kyle plans to study government and political science in college, staying engaged in local politics in the process. Further down the road, he hopes to attend law school and help reform the American criminal justice system as a public defender.