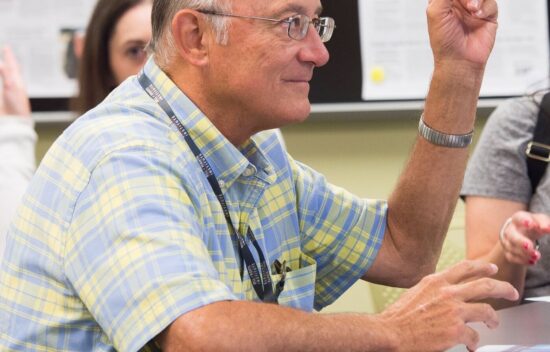 Kim L. Naden has been teaching social studies for a whopping 36 years in rural Winona, Kansas. He is the sole social studies teacher for Winona Triplains U.S.D. 275 and teaches every history subject from 6-12th grade. Kim has been a part of the Bill of Rights Institute network since the beginning of the Institute when programming focused on Kansas teachers. He has traveled to D.C. numerous times and to Philadelphia once with the Institute, always bringing along his camera to take pictures of the historical sites to take back and incorporate into his lessons.

Kim credits his grandmother with the development of his early love of history and recalls that when he was young, she used to share stories of her life in the late 1800s and early 1900s with him through pictures, newspaper clippings, and other family memorabilia including some from the Civil War! College brought a deeper awareness of his interest in the subject, and teaching was a natural extension of that interest.

“It took about a dozen years before I found my calling,” says Kim, “And then all the rest to hone my ability to teach my subjects.” Though he teaches it all, the period from the Revolutionary War through the Civil War remains his favorite era to teach. To that end, Abraham Lincoln is his favorite historical figure because, “he stands [a] head taller than any president for how he guided the nation through civil war, dealt with his political detractors, and wrote his own speeches. His humble beginnings also demonstrated what a person can become when living in the United States.”