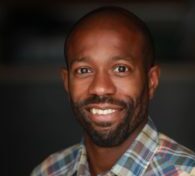 “One of the biggest challenges in teaching today is that we as educators have allowed our students to become passive in their education, rather than active participants,” says Jotwan Daniels, who is currently in his 14th year of teaching. Daniels is committed to encouraging critical thinking in his students at Summit High School in Breckenridge, Colorado, a task he feels he has been successful at so far. “My proudest achievement in my years of teaching is honing in on my craft to become more of a facilitator of knowledge as opposed to an information broker,” Daniels states.

Daniels’ biggest inspiration in education is currently Frederick Douglass. Daniels appreciates the abolitionist’s respect for the founding principles of natural rights and human equality. He also admires Douglass’ ability to challenge popular opinion. “‘Agitate! Agitate! Agitate!’ is a phrase credited to Douglass, one I try to instill in my students as I challenge them to question history,” Daniels writes.

Daniels especially loves connecting the past with the present. His favorite era to teach is the Gilded Age because of the resemblance that time has with the modern day. “The similarities are striking in terms of themes such as immigration, urbanization, political graft, social reform, wealth distribution and disparities, technological innovations, etc.,” Daniels states. Ultimately, he wants to instill in his students the desire to question and be active in their communities, arguing, “history, when taught properly, can teach us that nothing good happens without the collective efforts of dedicated people-especially in republican governments.”