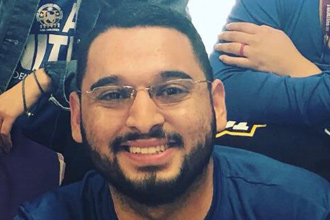 Joshua Llamas and Miranda Martinez both come from the border city of Laredo, Texas, but that’s not the only thing they have in common. Both are also alumni of the Bill of Rights Institute’s Constitutional Academy; Joshua attended in 2013 and Miranda in 2019. Did we also mention that Joshua was Miranda’s World History teacher at Lyndon B. Johnson High School in Laredo?

“Mr. Llamas told me how much fun he had, and how he learned how to debate,” said Miranda. “I thought we were just going to be stuck in a stuffy room, being forced to debate on random topics, but Mr. Llamas explained that Constitutional Academy also involved experiencing D.C. through tours of the monuments and museums.”

Both agree that one of the best parts of the program is the level of interaction, engagement, and exchange of ideas among the Constitutional Academy students from across the country. Civil discourse is one of the skills Joshua tries to foster among his students, something he believes is only possible with practice and the kind of knowledge about politics and history that he and Miranda both gained during the Academy.

“Constitutional Academy reinforced my knowledge and provided me with eye-opening perspectives that have enabled me to succeed professionally and have deepened my interest in the fields of politics and history,” says Joshua.

“Constitutional Academy definitely also contributed to my decision to become a teacher,” Joshua adds. He has taught at Lyndon B. Johnson High School for the last two years and holds a Bachelor of Arts in Political Science with a minor in History from Texas A&M International University in Laredo. He continued his education at TAMIU, receiving a Master of Science in curriculum this past May.

In addition to Constitutional Academy, Joshua was also inspired by four strong women in his life: his grandmother, mother, and two of his aunts. “They taught me the core values that have made me the man I am today,” Joshua says. “They always pushed me to do more and be more. I am a first-generation college student because of them.”

Like her teacher, Miranda has also been inspired to change her career plans after attending Constitutional Academy. “My goals for the future were to study medicine,” she says. “However, after attending the Academy, I have taken an interest in government and the important role it plays in our lives.”