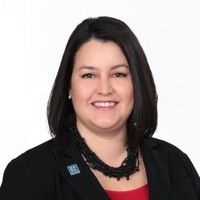 Jeanette knew she wanted to teach since she was in 4th grade. “[My teacher] Mr. Melton was fun but firm and taught us that growing up responsibly was going to benefit us and our families and society as a whole,” she recalls. Jeanette now has taught for 9 years and is currently instructing AP Comparative Government and Model Organization of American States at Midland High School in Texas.

Jeanette attended BRI’s Summer Institute titled “Liberties Guaranteed: The First Amendment” in 2017, which she described as “hands-down the best professional development I have ever attended.” Jeanette especially enjoyed visiting the Supreme Court, where she took a shot at the “highest court in the land” – the basketball court above the courtroom.

Jeanette’s favorite historical figure is Abraham Lincoln because she admires his speaking style and his actions to preserve the nation during the Civil War. Her biggest challenge as an educator is connecting learning with the real-world. And her proudest achievement? Jeanette loves it when students stay in touch with her and tell her the impact that she had on their lives. “One young man joined the Navy and thanked me for being his teacher – I hadn’t seen or heard from him in eight years,” she says.