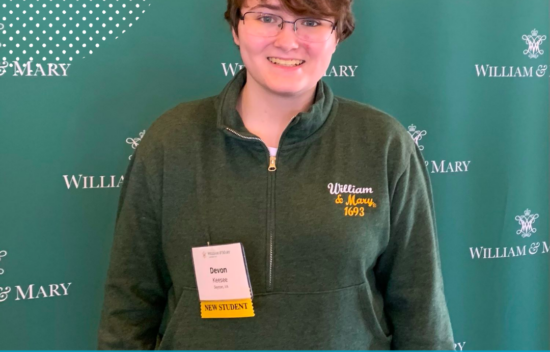 A graduating senior at Turner Ashby High School in Bridgewater, Virginia, Devon Keesee is passionate about her numerous scholastic involvements. She served as president of the high school’s National Honor Society chapter, competed on and led the school’s Scholastic Bowl Team, and co-led Turner Ashby’s Pride Coalition. Devon’s favorite classes include AP Human Geography, Debate, and AP Literature/Composition. The combination of her love for history and English classes has inspired her to pursue Classical Studies this fall through a joint degree program at William & Mary and the University of St. Andrews.

A historical figure Devon is particularly interested in, and would follow on social media, is Diogenes the Cynic, due to the fact that “as ancient Greek philosophers go, Diogenes was eccentric and insightful, two aspects that would make him a delight to follow on social media.”  Despite Devon’s admiration of Diogenes, Devon credits her dad with being her greatest influence and is grateful for her father’s devotion to debate, and incorporation of philosophy and forensics into the English curriculum. Her father’s influence has also led Devon to consider a career in teaching.

As a future voter, Devon is most concerned with ensuring voting accessibility to all. This is closely followed by her desire for a candidate to address gun violence, and other social justice and equity issues.