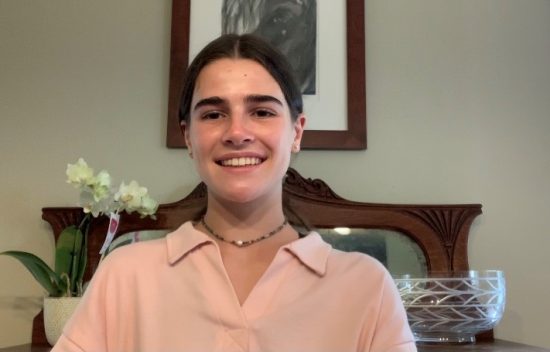 2021 We the Students Honorable Mention winner Abigail Christensen already has a diverse range of interests from biology to world history, despite having another three years ahead of her at Incarnate Word Academy in Texas. By the end of her freshman year, Abigail was already involved in three of her high school’s sports teams as well as its speech and debate club. The latter of which has led her to start thinking about a career in law although she has plenty of time to decide how she ultimately wants to “make the world a better place for people.”

As both an active social media user and a student of world history, Abigail would be interested in how Joan of Arc would be using social media if she were alive today. Having learned about Joan of Arc and so many other important historical figures and events from her teachers, she credits them with being important influences in her life along with her parents.

Abigail is not able to vote yet, however that hasn’t stopped her from thinking about issues that matter to her such as equality — a principle she can help to uphold if she stays on the pre-law track. Additionally, Abigail cares about protecting things that are important to her such as the environment and animals.