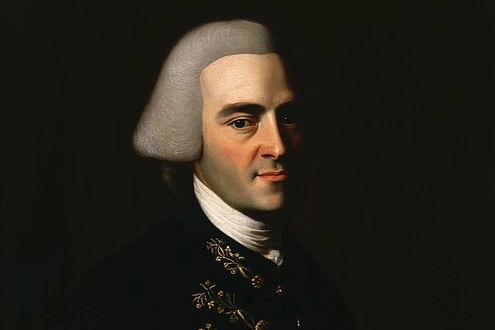 Forever famous for his outsized signature on the Declaration of Independence, John Hancock was a larger than life figure in other ways as well. Part of the great Boston triumvirate that included Samuel Adams and James Otis, Hancock was a wealthy merchant whose bank account helped to finance the radical activities of the Sons of Liberty. Hancock himself became a thorn in the side of the British, who seized his ship, the Liberty, in 1768 and put a price on his head in 1775.

Hancock served as president of the Continental Congress and presided over the signing of the Declaration of August 2, 1776. Disappointed at being passed over for command of the Continental Army in 1777, he returned to Massachusetts, where he had a hand in writing the state constitution of 1780 and served as governor for all but four years between 1780 and 1793. Hancock agreed to support ratification of the Constitution despite his reservations about centralized government power.

Popular in his day and in the hearts of succeeding generations of Americans because of his famous signature, opinion of Hancock remains divided. Some agree with John Adams that he was “an essential character” in the Revolution, while others belittle him as no more than Samuel Adams’s moneyman and tool.

“I glory in publicly avowing my eternal enmity to tyranny.” – 1774