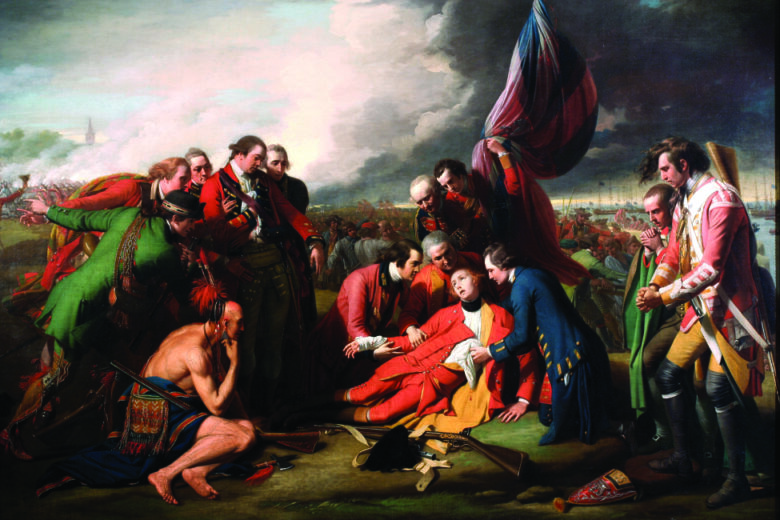 Prior to reading this Narrative, students should read the Albany Plan of Union and the A Clash of Empires: The French and Indian War Narratives.

Although the French and Indian War started in the Ohio country, most of its battles were fought along the borderland separating French Canada from New England and New York. French and British soldiers built forts to assert control over important waterways and land routes in this region, while American Indians engaged in their own diplomacy and warfare to protect their homelands.

In May 1756, General Louis-Joseph, marquis de Montcalm, arrived in Canada to lead the French war effort in North America. He sailed up the St. Lawrence River with an army of hundreds of regular soldiers in six French warships. Montcalm had little regard for the small-scale raiding tactics that had been the hallmark of French and Indian warfare in earlier colonial wars. Instead, he led armies composed of professional soldiers, Canadian militiamen, and Indians against British forts, relying on the siege tactics then commonly used in Europe.

On the British side, a series of veteran officers came to mobilize the colonies and fight the war against the French and their Indian allies. After the death of General Edward Braddock in 1755, General John Campbell, the Earl of Loudoun, became the British commander-in-chief in America. He was succeeded by General Jeffery Amherst, who worked closely with General James Wolfe to execute British operations against Canada from 1758 to 1760. These British generals quickly grew frustrated with the lack of cooperation they received from the colonial governments and the poor discipline among colonial troops. As the war progressed, they increasingly relied on professional soldiers and sailors from Britain for their operations and fought with European methods and tactics.

The clash between the colonial and European ways of war was evident in two humiliating defeats suffered by the British at Oswego and Fort William Henry. Located on the southeastern shore of Lake Ontario, Oswego was an important fur-trading post that provided Britain’s sole access to the Great Lakes. Montcalm laid siege to Oswego in August 1756, and the post quickly fell because of poor leadership and morale among the colonial soldiers defending it. After the surrender, French-allied Indians attacked the garrison, taking scalps, British supplies, and captives despite the efforts of the French to protect their prisoners of war.

The following summer, the same series of events unfolded on a larger scale when Montcalm attacked Fort William Henry, which guarded the passage from Lake Champlain to the Hudson River. This event became known among British colonists as the “Fort William Henry Massacre,” and it was later dramatized by novelist James Fenimore Cooper in his novel, The Last of the Mohicans (1826). Cooper’s portrayal of French treachery and Indian savagery became the most enduring image of the French and Indian War in U.S. arts and literature, but he took considerable liberties with his sources. Eyewitnesses at the time praised Montcalm and other French officers for trying to preserve the lives of the British. The Indians, who were not included when Montcalm and his British counterparts negotiated terms of surrender at Oswego and Fort William Henry, attacked the garrisons to acquire their traditional trophies of war.

British fortunes in the war turned around when Prime Minister William Pitt re-oriented Britain’s resources away from the war’s European theater and toward North America. Pitt believed that Britain’s naval power gave it a considerable advantage over the French in America, and that British victories there could undermine the French war effort elsewhere. He secured greater cooperation from the colonial governments by promising to reimburse them for funds they expended on the war effort, and he sent tens of thousands of British soldiers and sailors to North America, thereby minimizing British dependence on colonial troops. Pitt’s policies expanded the war in North America to an unprecedented scale and committed Britain to the conquest of New France.

Pitt’s strategy began to pay off in 1758. Under the leadership of Jeffery Amherst and James Wolfe, a massive amphibious force of British soldiers and sailors attacked Louisbourg, the French fortress that guarded the mouth of the St. Lawrence River. After a seven-week siege, Louisbourg fell, opening a seaborne route for the British invasion of Canada. The following year, Amherst and Wolfe split their forces and attacked Canada from two directions. Amherst led an army northward from Albany, forcing the French to abandon their forts at Crown Point and Ticonderoga along Lake Champlain as he drove toward Montreal. Meanwhile, Wolfe led a fleet of British warships and troop transports up the St. Lawrence River for an amphibious assault on Quebec, the capital of New France. For several weeks, Wolfe bombarded the city with artillery fire and terrorized the surrounding countryside, but Montcalm’s forces hunkered down behind the city’s walls and tried to wait out Wolfe’s supplies and patience.

On the night of September 12, Wolfe executed a daring maneuver, using the cover of darkness to have his men scale cliffs leading from the river to the Plains of Abraham, high ground west of Quebec. Early the next morning, Montcalm rushed to meet the enemy army that had suddenly appeared outside his city’s walls. In the ensuing battle, both Wolfe and Montcalm received fatal wounds. Wolfe died as the battle raged, but Montcalm survived until the next day. Despite the loss of their commander, the British broke the French lines and won a quick victory. Their moment of triumph was immortalized by American painter Benjamin West in his masterpiece The Death of General Wolfe(1770). British subjects on both sides of the Atlantic celebrated Wolfe as a national martyr, and in 1772, a monument in his honor was placed in London’s Westminster Abbey. The conquest of New France was completed nearly a year after Wolfe’s death, when Montreal surrendered to General Amherst.

After the fall of Canada, the Seven Years’ War continued in theaters around the globe, finally ending in the Peace of Paris in 1763. For colonial Americans, the most significant results of this treaty were Britain’s acquisition of Canada from the French and of Florida from the Spanish. Britain now controlled all of North America east of the Mississippi River, but it also faced a host of new problems in governing its empire there. It had to incorporate a French-speaking population of former enemies, as well as restore peace among Indian nations that were anxious to resume the fur trade but resented the British army’s occupation of their homelands.

Amherst tried to reduce the expenses of Britain’s Indian diplomacy by decreeing that Indian agents would no longer distribute trade goods as diplomatic gifts. He also mandated deep reductions in the amount of gunpowder traded to the American Indians formerly allied with the French. These policies angered Indians in the Great Lakes region, who believed Amherst was trying to enslave them. They rose up in Pontiac’s War in 1763, challenging British control of the trans-Appalachian West. This crisis led to the Crown’s imposition of the Proclamation of 1763, which forbade colonial land purchases and settlement west of the Appalachians until authorized by royal officials. The proclamation angered the colonists who felt entitled to expand onto new lands, based upon Lockean property rights to settle and improve property in recognition of their sacrifice and contribution to the war effort. Despite the Proclamation, settlers still moved west.

The conquest of Canada had been a stunning victory for Britain but also an expensive one. Britain’s national debt doubled during the Seven Years’ War, and now the Crown had to figure out a way to pay for governing its new North American dominions. Britain had to maintain thousands of troops on distant frontiers and pay the salaries of officials charged with governing vast new territory. Beginning in 1764, the British Parliament passed a series of acts intended to strengthen British rule in the colonies and extract from the inhabitants more taxes and customs revenues. These new policies angered the colonists, who had incurred substantial war debts of their own and were tired of being treated like second-class citizens. The colonists’ persistent opposition to British taxation without representation eventually led to revolution.

1. What issues resulting from the French and Indian War contributed to changes in British colonial policy after the war?

2. The ultimate British victory over the French in 1763 eventually resulted in

4. Pontiac’s War in 1763 was a conflict that broke out in response to

5. The end of the Seven Years’ War changed the dynamic in North America in all the following ways except

“[for the] Indians with whom We are connected . . . should not be molested or disturbed . . . no Governor . . . [may] grant Warrants of Survey, or pass any Patents for Lands beyond the Bounds of their respective Governments. . . .

Excerpt from the Royal Proclamation of 1763

1. What was the reasoning for the British decision to limit settlement in the west by issuing the Proclamation of 1763?

2. The Proclamation of 1763 angered many colonists for all the following reasons except

MacLeod, D. Peter. Northern Armageddon: The Battle of the Plains of Abraham and the Making of the American Revolution. New York: Knopf, 2016.