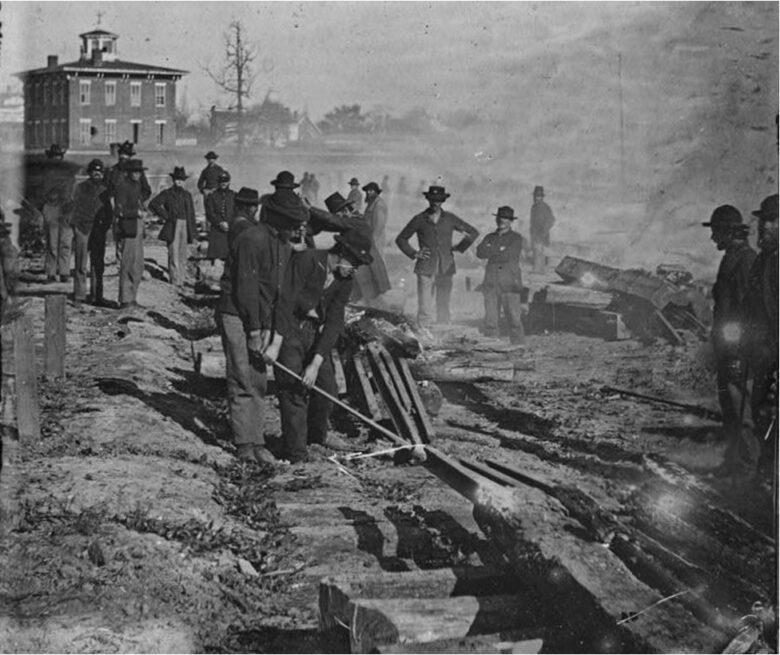 Use this Narrative alongside the J.B. Elliott, Scott’s Great Snake(Anaconda Plan), 1861 Primary Source and the Images of Total War: Sherman’s March to the Sea, 1865 Primary Source to illustrate the tactics the Union used to win the war.

Major General William Tecumseh Sherman’s actions after the capture of Atlanta and his subsequent March to the Sea are sometimes seen as anticipating the pattern of total war in the twentieth century. Some have claimed that Sherman was a war criminal, authorizing plunder and looting of civilian property. But the matter is more complex than either of these charges indicate. In fact, Sherman’s actions were the culmination of a Union policy toward civilians that evolved during the course of the war.

Initially, the Union adhered to a policy of “conciliation,” waging a somewhat limited war based on the notion that the majority of individuals in the seceded states did not support the breakup of the Union and that the governments of these states were illegal and did not represent their people’s will. Thus, early in the Rebellion, Union generals ordered their soldiers to respect the private property, including slaves, of all civilians, even those who were actively working against them. Even such generals as Ulysses Grant and William Tecumseh Sherman, who later advocated “hard war,” adhered to the policy of conciliation.

Conciliation seemed to be working until George McClellan’s stalemate on the Virginia peninsula in the early summer of 1862 and the emergence of Robert E. Lee, whose subsequent victories substantially strengthened the rebellion. As a result, Union generals such as Henry Halleck in Missouri and Benjamin Butler in New Orleans began to use what historians have called “pragmatic” policies, treating Unionists and those who were neutral better than they treated those who opposed the Union. The prominence of guerrilla warfare in Missouri and Tennessee meant that pragmatic policies took hold more quickly in the West than in Virginia.

By 1863, pragmatism began to give way to “hard war,” according to which Southerners who were identified as secessionists were the target of “directed severity,” a policy characterized by destruction of public property but also by a general unwillingness to harm civilians. Like pragmatism, hard war gained traction earlier in the West than it did in the East.

A milestone of sorts was reached in early 1863 when General Halleck published General Order 100, which provided “a generalized set of regulations” regarding the legal aspects of conducting war. The document, signed by President Lincoln in April 1863, authorized hard war but placed clear limits on its conduct.

The Vicksburg Campaign signaled the beginning of the Union’s hard war policy, permitting whatever was necessary including the destruction of civilian property to bring the conflict to an end. During the Vicksburg Campaign, Grant lived off the land for a time, allowing his army to take what it needed from civilians in its path. Approximately seven months after the fall of Vicksburg, Sherman applied the “hard hand of war” against central Mississippi during the Meridian operation.

This operation was different in that, for the first time, Sherman instructed Union troops to wage a war of destruction, leaving civilians with enough for survival but not enough to support military activity. The Meridian operation, which provided a blueprint for Sherman’s March to the Sea, was also an example of psychological warfare, meant to destroy any hope the people might have had of a Confederate victory.

In September 1863, Sherman laid out his emerging philosophy in a long letter to Halleck. He wrote that “every member of the nation is bound by natural and constitutional law to ‘maintain and defend the Government against all its opposers whomsoever.’ If they fail to do it they are derelict,” he maintained, “and can be punished or deprived of all advantages arising from the labors of those who do.” Sherman came to Georgia to command an army in that theater and put this policy into operation after the fall of Atlanta during his famous March to the Sea.

It is sufficient for my Government to know that the removal of the inhabitants has been made with liberality and fairness; that it has been attended by no force, and that no women or children have suffered, unless for want of provisions by their natural protectors and friends. My real reasons for this step were, we want all the houses of Atlanta for military storage and occupation. We want to contract the lines of defenses so as to diminish the garrison to the limit necessary to defend its narrow and vital parts instead of embracing, as the lines now do, the vast suburbs. This contraction of the lines, with the necessary citadels and redoubts, will make it necessary to destroy the very houses used by families as residences. Atlanta is a fortified town, was stubbornly defended and fairly captured. As captors we have a right to it. The residence here of a poor population would compel us sooner or later to feed them or see them starve under our eyes. The residence here of the families of our enemies would be a temptation and a means to keep up a correspondence dangerous and hurtful to our cause.

You cannot qualify war in harsher terms than I will. War is cruelty, and you cannot refine it; and those who brought war into our country deserve all the curses and maledictions a people can pour out. I know I had no hand in making this war, and I know I will make more sacrifices to-day than any of you to secure peace. But you cannot have peace and a division of our country. If the United States submits to a division now, it will not stop, but will go on until we reap the fate of Mexico, which is eternal war. The United States does and must assert its authority, wherever it once had power; for, if it relaxes one bit to pressure, it is gone, and I believe that such is the national feeling.

After the fall of Atlanta, Sherman asked for and received permission from Grant to march to Savannah. On this march, Sherman deployed 62,000 troops in two wings. He departed Atlanta on November 15 and, for the next month, he cut a swath of destruction 60 miles wide from Atlanta to Savannah, systematically destroying anything that could benefit the Rebel military effort.

Sherman’s goal was to “make Georgia howl.” “We are not only fighting hostile armies, but a hostile people, and we must make old and young, rich and poor, feel the hard hand of war.” The hard war was here for Georgia. “We cannot change the hearts and minds of those people of the South, but we can make war so terrible . . . [and] make them so sick of war that generations would pass away before they would again appeal to it.” Sherman contended that the United States and its representatives had the right to “remove and destroy every obstacle if need be, take every life, every acre of land, every particle of property, everything that to us seems proper [and] that all who do not aid are enemies, and we will not account to them for our acts.”

Some still believe Sherman’s army burned every home in its path. In fact, although the men destroyed public buildings, they largely left individual homes intact. But the myth of terrible destruction, rather than the truth of directed severity, has persisted.

The March to the Sea was meant to demonstrate to Southern civilians that “they could be hurt” and that “the Confederate government was powerless to protect them.” It was also meant as a policy to end the horrific Civil War, which had killed more than 600,000 soldiers.

3. The strategy of hard war was first used during the Battle of

4. In General Sherman’s use of hard war, the Battle of Atlanta included the destruction of

5. What was the Union’s initial policy toward civilians and Confederate territory?

6. The conduct of hard war was made possible when

“I attach more importance to these deep incisions into the enemy’s country, because this war differs from European wars in this particular: we are not only fighting hostile armies, but a hostile people, and must make old and young, rich and poor, feel the hard hand of war, as well as their organized armies. I know that this recent movement of mine through Georgia has had a wonderful effect in this respect. Thousands who had been deceived by their lying newspapers to believe that we were being whipped all the time now realize the truth, and have no appetite for a repetition of the same experience. . . . But I think faith in him [Jefferson Davis] is much shaken in Georgia, and before we have done with her South Carolina will not be quite so tempestuous. . . . When I move, the Fifteenth Corps will be on the right of the right wing, and their position will naturally bring them into Charleston first; and, if you have watched the history of that corps, you will have remarked that they generally do their work pretty well. The truth is, the whole army is burning with an insatiable desire to wreak vengeance upon South Carolina. I almost tremble at her fate, but feel that she deserves all that seems in store for her.”

1. The most significant reason for General Sherman’s explanation of hard war in the excerpt was that

2. Which of the statements is the most accurate paraphrase of General Sherman’s statement, “Thousands who had been deceived by their lying newspapers to believe that we were being whipped all the time now realize the truth, and have no appetite for a repetition of the same experience”?

3. Which of the following would have supported General Sherman’s strategy?