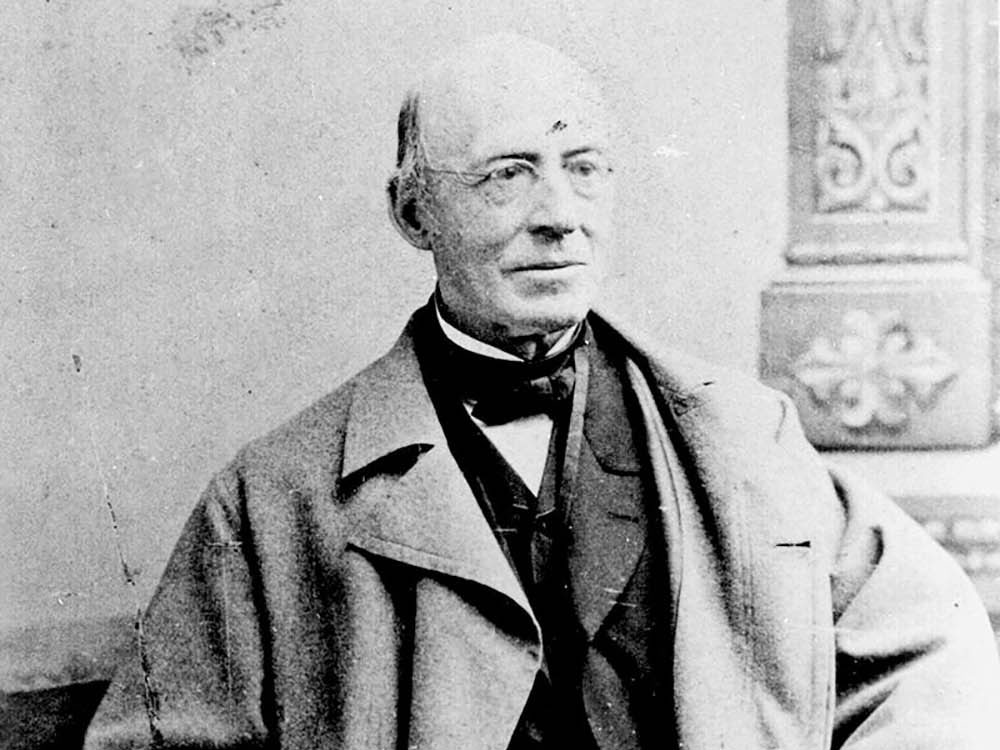 During a cold Boston night in March 1828, William Lloyd Garrison, then the twenty-three-year-old editor of the National Philanthropist newspaper, dined at Reverend William Collier’s boardinghouse. Garrison enjoyed a good dinner with a guest, Benjamin Lundy; no alcohol was served because all had taken a temperance pledge not to drink. Lundy was also a Quaker antislavery reformer and editor of the periodical Genius of Universal Emancipation.

Over many hours of conversation, Garrison, a social reformer and devout evangelical Christian influenced by the Second Great Awakening, was impressed by Lundy. Garrison shared Lundy’s belief in abolition, but Lundy took a more radical approach, demanding immediate abolition. During a stint as editor for a partisan Vermont newspaper called Journal of the Times, Garrison had promoted the gradual emancipation of every slave in the republic and the transportation of such liberated slaves and free colored peoples as are desirous of emigrating to a more genial [climate] in Africa. These ideas were part of a popular movement organized around the efforts of the American Colonization Society, started in 1817 and supported for humanitarian reasons by James Madison, John Marshall, Henry Clay, and Daniel Webster. Indeed, Garrison thought upholding the doctrine of gradual emancipation and colonization based upon wisdom and humanity was the duty of every patriot and Christian, and that immediate emancipation was most assuredly out of the question.

At one point in the dinner with Garrison, Lundy declared in animated fashion, “I shall not hesitate to call things by their proper names, nor yet refrain from speaking the truth.” Under Lundy’s influence, Garrison changed his views about slavery and even the course of his life, becoming the nation’s leading proponent of immediate and uncompromising abolitionism, or the end of slavery, a role he undertook for more than thirty years. In fact, Garrison wrote, “I feel that I owe everything instrumentally and under God, to Benjamin Lundy.”

Under Lundy’s influence, Garrison became an antislavery activist. Among other activities, he collected signatures on antislavery petitions and sent them to Congress. Over the next few years, Representative (and former president) John Quincy Adams launched a moral crusade by fighting for Congress to consider thousands of petitions after southerners instituted a gag rule that prevented them from coming to the floor of the chamber.

On July 4, 1829, Garrison walked six blocks from his rooming house to Park Street Church in Boston to deliver an Independence Day oration. He used the patriotic occasion to point out that slavery conflicted with America’s most cherished ideals of liberty, equality, and self-government. Free and enslaved African Americans possess the same inherent and inalienable rights as ours, he thundered from the pulpit. He called slavery a national sin and advocated the gradual emancipation of enslaved persons.

Garrison then accepted Lundy’s offer to move to Baltimore and take over publication of the antislavery newspaper Genius of Universal Emancipation. Lundy had persuaded Garrison to alter his views and support immediate emancipation and equal rights in the United States (instead of colonization) as a moral imperative. Garrison now believed that if slavery, indeed, were sinful, it needed to be expunged instantly from the United States. Witnessing the horrors of the slave markets in Baltimore only reinforced his views.

Garrison’s stance on slavery became increasingly uncompromising. When a slave trader warned him to be more moderate, Garrison responded, Delicacy is not to be counselled. Slavery is a monster, and must be treated as such. His written attacks on other slave traders in the port city as highway robbers and murderers led to an indictment for libel, for which he served a jail term from April to June 1830. He was unapologetic and said, “My pen cannot remain idle, nor my voice be suppressed, nor my heart cease to bleed, while two millions of my fellow beings wear the shackles of slavery in my own guilty country.”

Garrison and Lundy had a falling out, however, after the jail sentence and its unfavorable publicity. Garrison considered his future to be in newspapers and decided to move back to Boston that autumn because he thought many of the ministers and public figures there would be more receptive to his message. He won over several supporters in a series of antislavery speeches. Indeed, he soon received financial backing and launched a new newspaper, The Liberator, dedicated to abolitionist principles.

The inaugural edition of The Liberator was published on January 1, 1831, and plainly laid out Garrison’s antislavery views. Garrison appealed to Founding principles when he asserted that he would lift up the standard of emancipation in the eyes of the nation, within sight of Bunker Hill and in the birth place of liberty. He then publicly apologized for his own previous unreflecting support for the popular but pernicious doctrine of gradual abolition. He stated, I seize this opportunity to make a full and unequivocal recantation and thus publicly ask pardon of my God, of my country, and of my brethren the poor slaves, for having uttered a sentiment so full of timidity, injustice, and absurdity. He had altered his views considerably and now identified with those who urged the immediate freeing of enslaved persons.

The very first issue demonstrated Garrison’s uncompromising stance. “I will be as harsh as truth, and as uncompromising as justice. On this subject I do not wish to think or speak, or write, with moderation. No! No! Tell a man whose house is on fire to give a moderate alarm . . . but urge me not to use moderation in a cause like the present. He demonstrated his identification with his righteous cause when he finished: I am in earnest, I will not equivocate, I will not excuse, I will not retreat a single inch, AND I WILL BE HEARD.”

Over the next few years, Garrison established himself as one of the leading abolitionists in the country. He organized the New England Anti-Slavery Society and joined the American Anti-Slavery Society created by wealthy New York abolitionists Lewis and Arthur Tappan. His remained perhaps the leading abolitionist voice in the coming decades, in which slavery became a significant national issue that divided the country and led to the Civil War.

Garrison’s views became even more radical as he rejected a Union with slaveholders because of the immorality of slavery. He denounced the Union and the U.S. Constitution as a covenant with death and an agreement with Hell and believed he obeyed a higher law than the Constitution. In this way, his ideas differed from those of statesmen such as Abraham Lincoln, who wanted to preserve the Union and Constitution while eradicating the practice of slavery.

2. William Lloyd Garrison was most devoted to which one of the following antebellum reforms?

3. William Lloyd Garrison’s philosophy on slavery was most directly influenced by which individual?

4. William Lloyd Garrison’s philosophy regarding slavery was initially influenced by

5. William Lloyd Garrison’s abolitionist beliefs were publicized most often through

6. Why did Garrison apologize for advocating gradual emancipation?

“As I lay in my couch one night, in jail, I was led to contrast my situation with that of the poor slave. Ah! Dear sir, how wide the difference! In one particular only, (I said,) our conditions are similar. He is confined to the narrow limits of a plantation I to the narrow limits of a prison-yard. Farther all parallels fail. My food is far better and more abundant, as I get a pound of bread and a pound of meat, with a plentiful supply of pure water, per diem. I can lie down or rise up, sit or walk, sing or declaim, read or write, as fancy, pleasure or profit dictates. Moreover, I am daily cheered with the presence and conversation of friends; I am constantly supplied with fresh periodicals from every section of the country, and, consequently, am advertised of every new and interesting occurrence. Occasionally, a letter greets me from a distant place, filled with consolatory expressions, tender remembrances, or fine compliments. If it rain, my room is a shelter; if the sun flame too intensely, I can choose a shady retreat; if I am sick, medical aid is at hand. Besides, I have been charged with a specific offence have had the privilege of a trial by jury, and the aid of eminent counsel and am here ostensibly to satisfy the demands of justice. A few months, at the longest, will release me from my captivity.”

1. The excerpt could be used as support for the idea that

2. Which assertion is most directly related to the Garrison letter to Ebenezer Dole?

3. Garrison believed he would find the most support for his abolitionist newspaper in what area of the United States?