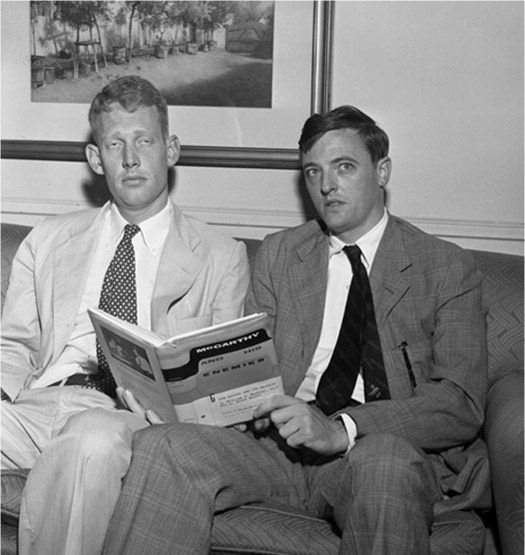 Use this narrative to introduce the Conservative Movement and the impact that Buckley and the National Review had on American political and academic culture.

William Frank Buckley Jr. was the preeminent voice of American conservatism in the latter half of the twentieth century. He was born in 1925 in New York City, the son of Josephine Steiner and William F. Buckley Sr., an oil developer and lawyer. In 1944, Buckley Jr. graduated from U.S. Army Officer Candidate School and was commissioned a second lieutenant during World War II. At the end of the war, he enrolled in Yale University, where he excelled as a debater and chaired the Yale Daily News. He was also selected for the secret Skull and Bones society, one of the few Roman Catholics of that era to be offered membership in this elite and traditionally Protestant society of undergraduates selected for their leadership qualities. After Yale, Buckley served for two years with the Central Intelligence Agency, including one year in Mexico as a field officer. In 1950, he married Patricia Taylor. The two remained married until her death in 2007.

In 1951, Buckley published God and Man at Yale: The Superstitions of “Academic Freedom,” a harsh critique of Yale based on his undergraduate experience. With biting wit he described Yale as an institution being subverted from within. He wrote of an increasingly unaccountable faculty using academic freedom as camouflage for their teaching of collectivist Keynesianism economics and even socialism, as well as their depiction of Christianity as an obsolete superstition. Noting that Yale’s charter required its alumni to set the direction of the college, he called on them to reassert their authority and regain control of undergraduate education from what he saw as a self-serving academic elite that was imposing its own values on Yale undergraduates. God and Man at Yale received highly critical reviews from Yale’s faculty, but the book nevertheless struck a chord and was widely read. In 2011, Time magazine included it among “the 100 best and most influential [books] written in English” since the magazine’s founding in 1923.

Buckley further established himself as a powerful conservative force with a 1954 book, McCarthy and His Enemies, co-authored with Brent Bozell. While allowing that Senator Joseph McCarthy had made mistakes, Buckley and Bozell ripped into the errors, exaggerations, and falsehoods of McCarthy’s critics. They depicted McCarthy as a patriotic crusader against communism, and “McCarthyism” as a movement “around which men of good will and stern morality can close ranks.”

Building on the prestige of his first two books, Buckley founded National Review in 1955. He staffed the journal with talented intellectuals, many of whom were former communists or other leftists – such as John Dos Passos, Frank Meyer, James Burnham, Willmoore Kendall, William Schlamm, and Whittaker Chambers who had changed their views, as well as traditionalist conservatives such as Russell Kirk and Catholic conservatives such as Bozell and Garry Wills.

Under Buckley’s leadership, National Review articulated a conservatism that fused previously independent traditions: free-market capitalism, libertarianism, traditionalism, and anti-communism. Before its founding, although there had been a number of individual talented and articulate conservative writers, there was no coherent intellectual current. In 1950, Lionel Trilling, an influential critic, wrote:

In the United States at this time liberalism is not only the dominant but even the sole intellectual tradition. For it is the plain fact that nowadays there are no conservative or reactionary ideas in general circulation . . . the conservative impulse and the reactionary impulse do not . . . express themselves in ideas but only . . . in irritable mental gestures which seek to resemble ideas.

stands athwart history, yelling Stop, at a time when no one is inclined to do so, or to have much patience with those who so urge it . . . it is out of place because, in its maturity, literate America rejected conservatism in favor of radical social experimentation . . . since ideas rule the world, the ideologues, having won over the intellectual class, simply walked in and started to . . . run just about everything. There never was an age of conformity quite like this one.

Buckley’s and National Review’s articulation of an intellectually coherent conservatism, as well as its sharp and often witty criticism of the eccentricities and intellectual laziness of the dominant liberalism of the era, soon earned it a large audience on the right as well as massive hostility from the left. By the end of the 1950s, National Review was easily the preeminent journalistic voice of conservatism and one not easily dismissed by liberals.

Buckley and National Review also acted as gatekeepers of conservatism, excluding those ideas and groups they considered extremist, nutty, or dangerous. Among those considered unworthy of inclusion in modern conservatism were anti-Semites, white supremacists, the extremist anti-communists of the John Birch Society, and Ayn Rand and her ideology of hyper-capitalism combined with hyper-atheism. Buckley was initially sympathetic to southern segregation but then shifted to opposing segregation and supported color-blind racial policies earlier than other public intellectuals. He opposed conservative support for the segregationist campaign of George Wallace for the presidency in 1968. Buckley was also an early advocate of marijuana legalization, a view that only slowly found acceptance among conservatives.

Although generally working within the Republican Party, Buckley was not a partisan and was not averse to working against Republicans when doing so served what he saw as the conservative cause. In 1965, he ran for mayor of New York City as the candidate of the Conservative Party in an unsuccessful attempt to prevent the election of John Lindsay, the Republican candidate and a liberal. In 1970, Buckley and his allies actively supported the successful campaign of his older brother, James Buckley, on the Conservative Party ticket in New York, to capture the U.S. Senate seat held by incumbent liberal Republican Charles Goodell. In 1988, Buckley backed Connecticut Democrat Joseph Lieberman in his successful campaign to defeat the incumbent liberal Republican Senator Lowell Weicker.

Within national Republican politics, Buckley supported the 1964 candidacy of Senator Barry Goldwater, first for the Republican Party nomination (successfully) and then in the general election for the presidency (unsuccessfully). Buckley was only mildly enthusiastic about Republican Richard Nixon, initially supporting his presidency in 1969 but breaking with it in 1971, over Nixon’s pursuit ofdétentewith the Soviet Union and Communist China and his attempt to establish a government-funded national minimum income. The two later reconciled, and, in 1973, Nixon appointed Buckley to the post of American delegate to the United Nations.

Buckley was an early backer of Ronald Reagan for the presidency, first in Reagan’s unsuccessful campaign for the Republican nomination in 1976 and then in his successful campaign for the nomination and the presidency in 1980. Buckley later wrote a book about his long friendship with Reagan: The Reagan I Knew (2008). His attitude toward Presidents George H. W. Bush and George W. Bush was as mild as had been his attitude toward President Nixon. He judged the latter Bush’s Iraq War as a well-intentioned overreach that had ended in failure.

Buckley wrote more than 50 books about politics, sailing, history, rhetoric, and writing, as well as a series of spy novels. He also wrote a political column, On the Right, that appeared in hundreds of newspapers across the United States. By the time of his death in 2008, more than 5,500 of his columns had been published.

In 1966, Buckley founded and hosted a public affairs show, Firing Line with William F. Buckley Jr., on JWOR-TV in New York City. It quickly found an audience and, in 1971, Firing Line moved to the Public Broadcasting Service (PBS). During the 33 years of its existence, from 1966 to 1999, more than 1,500 episodes were broadcast. The show featured both discussions and debates on public issues, presided over by Buckley with his urbane and witty manner, flashing smile, and multisyllabic vocabulary. Guests included prominent politicians, academics, writers, media personalities, religious figures, and other persons of public interest. The style of the program was highly civil and pitched at a sophisticated intellectual level. Buckley’s role as host of Firing Line helped to cement his place as the most prominent conservative public intellectual of his era.

Buckley retired from active management of National Review in 1990 but continued to write for the journal and pen his newspaper column until his death in 2008 at the age of 82. The New York Times’ obituary lauded the way he had “marshaled polysyllabic exuberance, famously arched eyebrows and a refined, perspicacious mind to elevate conservatism to the center of American political discourse.” It judged that his “greatest achievement was making conservatism not just electoral Republicanism but conservatism as a system of ideas – respectable in liberal post – World War II America.”

3. By being above party politics and remaining focused on his personal political philosophy, William F. Buckley Jr. was most like which of the following?

4. During the late twentieth century, which of the following politicians did William F. Buckley Jr. most clearly support by virtue of his political independence?

5. After the successful publication of his first two books, William F. Buckley Jr.

6. On which of the following social ideas did William F. Buckley Jr. change his opinion during the late twentieth century?

“The individualist insists that drastic depressions are the result of credit inflation; (not excessive savings, as the Keynesians would have it) which at all times in history has been caused by direct government action or by government influence. As for aggravated unemployment, the individualist insists that it is exclusively the result of government intervention through inflation, wage rigidities, burdensome taxes, and restrictions on trade and production such as price controls and tariffs. The inflation that comes inevitably with government pump-priming soon catches up with the laborer, wipes away any real increase in his wages, discourages private investment, and sets off a new deflationary spiral which can in turn only be counteracted by more coercive and paternalistic government policies. And so it is that the “long run” is very soon a-coming, and the harmful effects of government intervention are far more durable than those that are sustained by encouraging the unhampered free market to work out its own destiny.”

1. On the basis of the excerpt, with which of the following presidents would William F. Buckley Jr. disagree most?

2. The opinion expressed in the excerpt was most likely influenced by the

3. Which group would most strongly agree with the sentiments expressed in the excerpt?