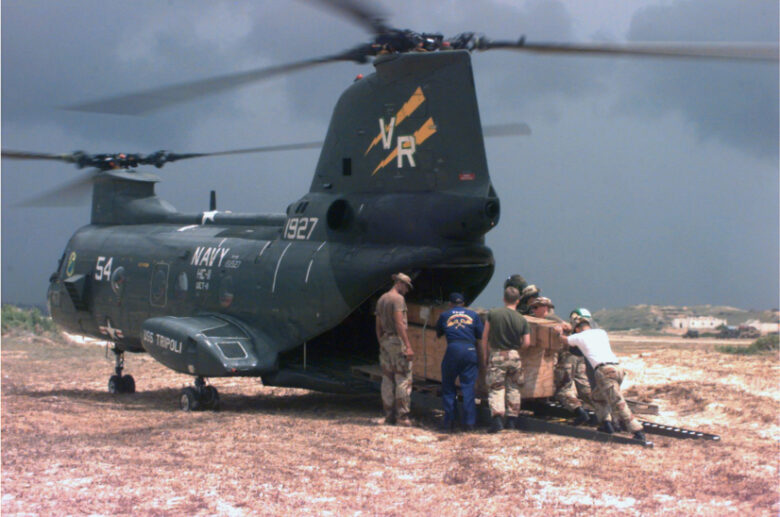 For decades after World War II, American foreign policy had largely been concerned with stopping the spread of communism. Containment, the doctrine of protecting friendly nations from falling to communist revolutions, had long been the operative perspective for U.S. leaders, who used it to justify interventions across the globe. This continuity had allowed lawmakers a certain clarity of thought and action. The collapse of the Soviet Union in 1991, however, brought an end to predictable foreign policy. It fell to the administrations of Presidents George W. Bush (1989–1993) and Bill Clinton (1993–2001) to decide America’s place in the post–Cold War world. With the specter of communism largely gone, should the United States continue to intervene in crises around the world? Two events, in places most Americans had never heard of, soon challenged the very idea of multinational peacekeeping.

The Clinton administration faced its first foreign policy test in the east African nation of Somalia. President Mohamed Siad Barre had ruled Somalia since 1969, but he was finally forced from power in 1991. The collapse of his government led to a civil war between rival factions of warlords, with the Somali people caught in the middle. The strife and a subsequent drought caused a famine in which thousands of Somalis perished, prompting the international community to take notice. In 1992, the United States led a United Nations (U.N.) humanitarian mission, “Operation Restore Hope,” to provide aid directly to the people, because the warlords often took it for themselves. Most U.N. peacekeeping missions had been designed to keep the peace between nations, usually at the end of a conflict, but the goal this time was to mediate an internal conflict. Few decision makers anticipated the challenges this would pose.

In October 1993, U.S. officials decided to launch an operation to arrest General Mohamed Farah Aideed, Somalia’s most powerful warlord, whose militia posed a challenge to peace efforts. They hoped a show of force would cripple this militia and bring Aideed and his lieutenants to justice. They underestimated the strength of his militia, however, and U.S. forces encountered far more resistance than they anticipated. Approaching Aideed’s stronghold, two U.S. Blackhawk helicopters were shot down over the city of Mogadishu. An elite team of special forces soldiers rushed to their aid and a bloody battle ensued. With no air support or heavy armored vehicles to protect them, the soldiers found themselves in a desperate battle for survival. In fighting that lasted until the next morning, 18 U.S. soldiers and hundreds of Somalis, mostly civilians caught in the crossfire, were killed.

The sight of an American soldier’s body being dragged through the streets of Mogadishu on television made the American public question the mission. President Clinton decided the mission was not worth the cost, and within six months, the United States had pulled out, leaving the Somalis to their fate and making the region a haven for the al-Qaeda terrorist network. The apparent loss of U.S. resolve also encouraged the network’s leader, Osama bin Laden, who came to believe the United States was weak and lacked the will to fight.

The disastrous Somalia intervention embarrassed the Clinton administration, led opposition Republican lawmakers to argue that the United States did not need to police the world, and prompted a re-evaluation of America’s role in world affairs. President Clinton, whose focus was on domestic issues, wanted to make sure the country did not find itself in a similar position again. The job of formulating a new strategy for American interventions and participation in U.N. peacekeeping efforts went to Richard Clarke of the National Security Council.

The result of Clarke’s work was PDD-25, a Presidential Decision Directive (PDD) that set out 16 factors for policy makers to ponder before agreeing to support peacekeeping efforts. These included the value of the area to American strategic interests, the likelihood that American service members would engage in combat operations, and the formulation of a clear exit strategy to end the mission. Clarke’s critics claimed PDD-25 would effectively end U.S. participation in humanitarian and peacekeeping operations, but he countered that it would save peacekeeping by making its purpose and goals clearer for lawmakers and the public to understand. As Clarke was formulating this new, more restrictive vision of American intervention, a crisis was quietly emerging in the small central African nation of Rwanda.

In spring 1994, it appeared that Rwanda was heading toward a fragile peace that would end its recent civil war. The Arusha Accords, negotiated in neighboring Tanzania, created a power-sharing government including the majority Hutu ethnic group and the minority Tutsis. The U.N. dispatched a force of 2,500 peacekeepers, under the command of Canadian Major General Romeo Dallaire, to oversee the peace agreement. While the Rwandan government had assured world leaders that the peace process was being implemented, Dallaire had seen distressing signs of a military buildup by the Rwandan army and Hutu militias. He had no authority, however, to try to round up the weapons caches the militias were amassing.

An already tense situation exploded on April 6, 1994, when the airplane carrying President Juvénal Habyarimana, a Hutu who had gravitated toward authoritarian rule, was shot down above the capital, Kigali. Within hours, the military had seized power, ignoring the lines of succession that required Prime Minister Agathe Uwilingiyimana, a moderate Hutu leader, to assume power. General Dallaire, worried about the safety of the prime minster, dispatched five Ghanaian and 10 Belgian peacekeepers to retrieve her at dawn on April 7, but they arrived just before a large force of Hutu militia. The prime minster and her husband were murdered by the Hutus on the spot and the U.N. force taken prisoner. The Ghanaians were released, but the Belgians were executed and their bodies savagely dismembered. The Hutu gunmen apparently believed this would trigger the departure of the Belgian forces and the collapse of the U.N. mission, just as the death of American service members in Somalia had led to a quick U.S. withdrawal. Indeed, they were right.

It soon became apparent that this was no routine incident of violence but rather an orchestrated attempt to eliminate moderate Hutus and the minority Tutsi people who composed approximately 15 percent of the population. The situation had been brewing for some time, and a local Hutu radio station, Radio Mille Collines, had been broadcasting anti-Tutsi propaganda for weeks. After April 6, the station listed the names and addresses of targets to be killed while also stressing that no Hutus should help the Tutsi, whom they called Inyenzi, or cockroaches. For 100 days, the killing of Tutsis continued, with most victims being hacked to death with machetes or other makeshift weapons. What the perpetrators of the genocide lacked in technology, they made up for with brutality.

Throughout the crisis, General Dallaire appealed to world leaders for help, but it became increasingly clear that no nation would act without the United States taking the lead. President Clinton, guided by Richard Clarke’s PDD-25, had to make the decision whether to intervene in the crisis. Doing so could save lives, but it also could put American soldiers at risk. Some estimated the financial cost of invention might have been less than the $200 million the United States sent. The more costly assistance also did not save lives the way intervention might have done. Weighing the risks, the Clinton administration made the fateful decision not to intervene.

First, U.S. leaders rarely push for intervention if the American people are against the idea. Genocides, in particular, have been difficult to explain to the public. The United States (and other nations) had done little to stop a genocide in Armenia (1915–1918), the Holocaust during World War II, or the Cambodian genocide of the late 1970s. President Clinton, like most politicians, proved reluctant to lead on the issue of stopping the Rwandan genocide, fearing that his stance would hurt him politically with the American public and bolster support for his Republican opposition. In addition, administration officials demanded the implementation of the peace accords and stressed they did not want to take sides in an internal conflict. Finally, the Rwandan genocide, like those that came before it, was so shocking and so inhumane that leaders, the press, and the public had a difficult time believing the stories of mass murder were true.

The experience in Somalia still dominated the thoughts of Clinton administration officials in 1994 when the Rwandan genocide began. Although PDD-25 was not released until May 4, 1994, its ideas had been influencing decision makers for some time, and the Rwandan crisis did not meet its threshold for intervention. Rwanda, landlocked and of little economic importance, had no strategic value for the United States. Certainly, it seemed like an unnecessary risk to send American soldiers into harm’s way.

When General Dallaire contacted U.N. Headquarters on April 10, 1994, asking for 2,500 additional troops and a broader mandate to engage in combat operations, the request hinged on American approval, because only the United States had the power to rapidly deploy a large enough force. After the United States refused to intervene, France, Belgium, and Italy sent in 1,000 troops to ferry out their citizens. Dallaire could only watch as this powerful force entered Rwanda and left just as quickly, taking 4,000 foreigners with it.

Other nations then decided it was time to end the U.N. mission in Rwanda; the Belgians were the first to leave, on April 19. By late April, Dallaire commanded only 500 of the original 2,500 soldiers. Though vastly outnumbered, they did admirable work protecting what Tutsis they could. At the Hotel des Mille Collines, for example, 10 peacekeepers successfully sheltered hundreds of Tutsis, but it was not enough. The rebel Rwandan Patriotic Front gradually took control of the country, ending the genocide but forcing tens of thousands of Hutus to flee to neighboring Zaire, where a cholera epidemic soon killed thousands. The genocide itself had claimed some 800,000 people, so many that dismembered bodies choked the Kagera River along the Rwandan border.

1. The Rwandan crisis presented a foreign policy crisis for President Clinton because it

3. United States actions in Somalia in the early 1990s led to

4. After the Somalia incident in 1993, the United States

5. The organization charged with organizing peacekeeping and humanitarian assistance across the globe is

7. The group responsible for the Rwandan genocide was the

8. After 100 days of bloodshed, the Rwandan genocide finally ended when

“Last year, President Clinton ordered an inter-agency review of our nation’s peacekeeping policies and programs in order to develop a comprehensive policy framework suited to the realities of the post-Cold War period. . . .

. . . The primary mission of the U.S. Armed Forces remains to be prepared to fight and win two simultaneous regional conflicts. In this context, peacekeeping can be one useful tool to help prevent and resolve such conflicts . . . Peacekeeping can also serve U.S. interests by promoting democracy, regional security, and economic growth.

1. Making disciplined and coherent choices about which peace operations to support . . .

2. Reducing U.S. costs for UN peace operations, both the percentage our nation pays for each operation and the cost of the operations themselves. . . .

3. Defining clearly our policy regarding the command and control of American military forces in UN peace operations. . . .

4. Reforming and improving the UN’s capability to manage peace operations. . . .

6. Creating better forms of cooperation between the Executive, the Congress and the American public on peace operations.”

1. The sentiments expressed in the excerpt were most directly shaped by

2. The excerpt most directly reflected a growing belief that

3. This excerpt most directly led the United States to embrace

Power, Samantha. “A Problem from Hell:” America and the Age of Genocide. New York: Harper Perennial, 2002.