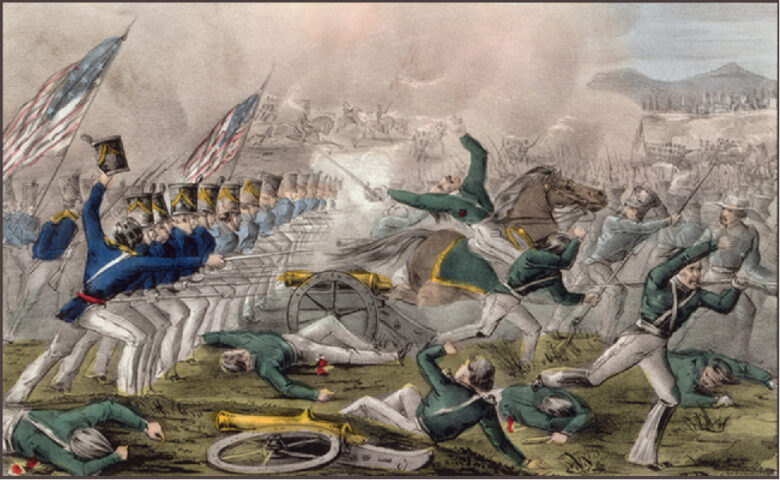 Use this Decision Point alongside the Chapter 7 Introductory Essay: 1844–1860 and the Debating the Mexican-American War, May 1846 Primary Source to explore the United States’ and James K. Polk’s decision to declare war on Mexico.

On May 11, 1846, President James K. Polk sent a special message to Congress asking for a declaration of war against Mexico. In his message, the president outlined a series of grievances, including the complaint that the government of Mexico had refused to receive an envoy from the United States whom he had sent to try to negotiate a peaceful solution to the problems between the two countries. Worse, he said, the Mexicans, “after a long series of menaces, have at last invaded our territories and shed the blood of our fellow-citizens on our own soil.” Polk pointed to an alleged attack made on American soldiers in southern Texas and argued that the Mexicans had started a war. Now the United States had no choice but to defend itself. Congress responded by declaring war two days later, but the debate over whether to fight Mexico had been going on for some time, and the conflict was not simply an American response to an unprovoked Mexican attack.

The question whether to go to war with Mexico was rooted in the American idea of Manifest Destiny. This concept had deep roots but flourished within the dynamic society and culture of the early American republic. It held that the United States was fated to spread across the continent of North America and extend the ideals of liberty, equality, and democracy into new territories. Different people pointed to different origins for this national purpose. Some believed it was God’s plan for the country, whereas others preferred to see it as part of a natural design, and still others thought of it as continuing the historical march of progress. Manifest Destiny also stemmed from economic considerations. The United States had experienced rapid population growth in the decades after the American Revolution, and Americans had an insatiable desire for more land for agriculture. Thus, it seemed to many both necessary and right that a bigger population needed more territory.

Many American Indians and Mexicans disagreed that the destiny of the United States was so manifest, and some Americans saw U.S. expansion as conquest. This was certainly the view among the leaders of the Mexican republic in regard to Texas, California, and other regions in northern Mexico. In the 1820s, thousands of Americans had moved south to Texas, welcomed by the Mexicans who wanted them to help develop the area and serve as a buffer against attacks by American Indian tribes like the Comanche. But the Texans rose up against the Mexican government and won their independence in 1836. Soon there were calls for the new Texas republic to be annexed to the United States. Several attempts to do so failed, but President John Tyler led a successful annexation effort, and Texas joined the Union in 1845.

There was disagreement over the location of the southern border of the new state. The Mexicans argued that it was the Nueces River, and the American settlers insisted it was farther south at the Rio Grande. When Democrat James K. Polk took office as president in 1845, he promised to acquire more land from Mexico and also hoped to settle the boundary issue in favor of the United States. Meanwhile, more American settlers were making their way into Mexican territories, including California, where there was talk of a revolution to establish an independent Bear Flag Republic. Settlers were also increasingly interested in New Mexico, and many Mormons had moved to Utah. Certainly, the Mexicans had reason to be wary of their northern neighbor.

Although most Americans favored westward expansion, many were not convinced it was a good thing. Some northerners, in particular, worried that territorial expansion was the goal of southerners who actually wanted to preserve their interest in expanding and protecting slavery. Southern planters did require more land for their ever-expanding cotton kingdom. Cotton was the foundation of the American economy: it accounted for some two-thirds of the nation’s exports, and northern industrialists relied on the crop for their textile mills. To grow cotton in the early 1800s required land and labor. Slavery provided the labor and territorial expansion provided the land. Although many northerners happily supported expansion into new territories like Oregon, they feared movement into Mexican lands to the south meant the expansion of slavery, especially when Texas joined the union as a slave state.

White southerners enthusiastically supported taking more land from Mexico, and some of them also wanted to expand into the Caribbean and Central America. Adding new territory south of 36°30’ latitude, which had marked the boundary between free and slave states since the Missouri Compromise in 1820, indeed, would allow for the expansion of the South’s plantation economy and slavery. It would also give southerners more political power. New slave states would have at least one seat in the House of Representatives and two in the Senate, which would allow the South to protect slavery against the growing criticism in the North. No wonder, then, that so many antislavery northerners feared a war with Mexico would be fought to build an empire for slavery.

With tensions mounting, President Polk sent troops to the Rio Grande under General Zachary Taylor to protect the border. The Mexicans saw this as an invasion, and so did some Americans. Ulysses S. Grant, an officer under Taylor’s command, saw the coming conflict as an unjust war being fought to expand slavery. Although he did his duty, he later said, “We were sent to provoke a fight, but it was essential that Mexico should commence it. It was very doubtful whether Congress would declare war; but if Mexico should attack our troops,” then the president could say that the war had already begun and Congress would support the conflict. In other words, Polk wanted political cover for his actions, and he sent Taylor into the disputed territory in hope the Mexicans would attack and he could blame them for starting the war. And that was exactly what happened.

At first, the Mexicans did not respond to the American troops moving into the disputed territory south of the Nueces River, although the Mexican government declared it would fight a defensive war against the United States. General Taylor had his men build a fort on the banks of the Rio Grande across from the Mexican town of Matamoros. On April 25, 1846, a large force of Mexican soldiers attacked a U.S. Army patrol and killed 11 Americans. A few days later, Mexican artillery began to bombard the U.S. fort on the Rio Grande. Taylor retaliated, and hostilities commenced. When news of the fighting reached Washington, DC, President Polk had what he wanted. He asked the members of Congress to declare war, and they did.

Although the war had now begun, not everyone went along with the decision. Poet and philosopher Henry David Thoreau went to jail for refusing to pay taxes that would help fund the war and wrote his famous essay, later known as “Civil Disobedience,” to assert the freedom of the individual to resist government policy. Some tried to stop the war from expanding slavery. In 1846, David Wilmot, a Democratic representative from Pennsylvania, tried to prohibit slavery in any territory taken from Mexico, with a rider attached to a bill funding part of the war. The Wilmot Proviso passed the House of Representatives, but it failed in the Senate. Another antiwar representative was Abraham Lincoln of Illinois, who entered Congress after the combat was essentially over but who still delivered a scathing attack on the president in a speech on the floor of the House of Representatives on January 12, 1848. Lincoln denounced the plan to take the northern half of Mexico, saying he hoped that Polk realized that “the blood of this war, like the blood of Abel, is crying to Heaven against him”. But the United States had clearly won the war and gained a huge swath of territory in the final treaty negotiations, taking in California, New Mexico (which included what is now Arizona), and Utah (which included what later became Nevada).

As the war was ending, gold was discovered in California. Many Americans saw the ensuing Gold Rush as evidence of the validity of Manifest Destiny, because the wealth of California had not been fully discovered until it became part of the United States. It seemed that the war was truly a triumph. But things did not turn out as expected. As the poet and essayist Ralph Waldo Emerson predicted, “The United States will swallow Mexico, but it will be as the man who swallows arsenic, which brings him down in turn. Mexico will poison us.” California’s population soon grew large enough for the territory to become a state. Its application to enter the union as a free state set off a political firestorm between the North and the South, however, because part of it lay south of the 36°30’ line. Although the Compromise of 1850 had temporarily eased political tensions over the territorial expansion of slavery, the issue remained unresolved. Ironically, although it started in the name of the nation’s collective destiny, the Mexican-American War helped set the stage for the Civil War that ripped the country apart.

“The untransacted destiny of the American people is to subdue the continent—to rush over this vast field to the Pacific Ocean—to animate the many hundred millions of its people, and to cheer them upward—to set the principle of self-government at work—to agitate these herculean masses—to establish a new order in human affairs”.

This quotation best summarizes the concept of

2. Critics of the Mexican-American War believed the conflict was escalated a war for the purpose of

“Mexico has passed the boundary of the United States, has invaded our territory and shed American blood upon the American soil. She has proclaimed that hostilities have commenced, and that the two nations are now at war. As war exists, and, notwithstanding all our efforts to avoid it, exists by the act of Mexico herself, we are called upon by every consideration of duty and patriotism to vindicate with decision the honor, the rights, and the interests of our country.”

In this excerpt, President Polk is asking Congress to

4. Refer to the image provided. The sentiment portrayed in the cartoon suggests that a leading Whig presidential nominee was negatively viewed because of his connection to the

5. Refer to the map provided. The map best illustrates the United States’ continental expansion in the aftermath of

6. Which of these expressed overwhelming support for acquiring territory from Mexico?

“The government itself, which is only the mode which the people have chosen to execute their will, is equally liable to be abused and perverted before the people can act through it. Witness the present Mexican war, the work of comparatively a few individuals using the standing government as their tool; for, in the outset, the people would not have consented to this measure. . . .

Unjust laws exist: shall we be content to obey them, or shall we endeavor to amend them, and obey them until we have succeeded, or shall we transgress them at once?”

1. This excerpt was written in response to the

2. What group would most likely agree with the point of view expressed?

Lincoln, Abraham. “The War With Mexico: Speech in the United States House of Representatives. January 12, 1848.” http://teachingamericanhistory.org/library/document/the-war-with-mexico-speech-in-the-united-states-house-of-representatives/

Polk, James K. “President James K. Polk, To the Congress of the United States: A Special Message Calling for a Declaration of War against Mexico, Washington, May 11, 1846.” https://www.gilderlehrman.org/sites/default/files/inline-pdfs/Lesson%201%20Polk%20Message%20Complete.pdf