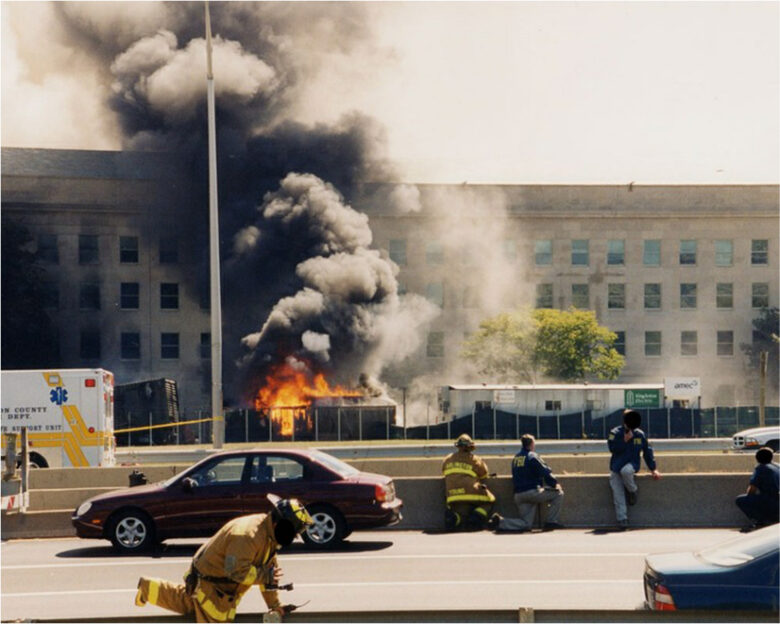 Use this narrative after covering 9/11 to discuss the post-9/11 United States and the implications for domestic and foreign policy. This narrative can be used with the U.S. Military Intervention in Afghanistan Decision Point; the Does the Threat of Terrorism Justify Increased Surveillance? Point-Counterpoint; the Was the Invasion of Iraq Justified? Point-Counterpoint; and the Security, Liberty, and the USA PATRIOT Act Lesson.

The September 11, 2001, terrorist attack on the United States led President George W. Bush to declare a War on Terror and Congress to hastily pass the USA PATRIOT Act 45 days later. Supporters said the law would make America safer. Critics argued it gave the government too much power to pry into the private lives of citizens and violated constitutional liberties. Almost two decades after its initial passage, the law, including its most controversial provisions, is still in effect, having been renewed repeatedly by successive administrations and Congresses controlled by both parties. In the background remains the question whether American citizens should trade some of their freedom and privacy for more safety and security.

The USA PATRIOT Act’s name is an acronym for “Uniting and Strengthening America by Providing Appropriate Tools Required to Intercept and Obstruct Terrorism”. The act contained 10 titles, or sections, that covered hundreds of pages of text and amended at least 15 existing statutes. Many of its provisions were relatively noncontroversial, including increasing communication among different federal agencies in foreign intelligence gathering and granting greater regulatory powers to combat foreign money laundering and terrorism and shore up border security. However, a handful of changes to government surveillance powers in Titles II and V of the Act were widely debated. These gave the federal government greater authority to track, intercept, and gather communications and intelligence regarding suspected terrorists at home and abroad.

Under existing criminal law at the time Congress passed the act, the government had the ability to obtain “roving wiretaps” or surveillance on multiple phones for ordinary crimes. These court orders omitted the identification of specific devices or places where the surveillance was to occur when the target was likely to change locations or cell phones rapidly. The only way the government could conduct surveillance on multiple devices used by a foreign target of interest was to obtain separate court authorizations for each device. Section 206 of the USA PATRIOT Act allowed for roving wiretaps, which covered multiple devices without the need for individual authorizations, thus permitting the government to surveil targets of terrorist investigations who rapidly changed locations or devices. Section 207 of the Act expanded the government’s authority to conduct surveillance of agents of foreign powers and non-U.S. citizens who are members of international groups. Critics charged that these provisions could lead to the targeting of innocent American citizens and the intentional or unintentional intercept of their communications. Supporters argued that roving wiretaps were a reasonable response to changing technology not tied to a certain location or device.

Section 213 of the USA PATRIOT Act covered “sneak and peek” search warrants, which allowed law enforcement officers to search a home or business and seize material without the knowledge or consent of the owner or occupant. The law did not specify when the FBI had to notify the target, and critics charged that delays in notification were unconstitutional under the protections against unreasonable search and seizure in the Fourth Amendment. Section 215, nicknamed “the library provision,” allowed the FBI to ask the Foreign Intelligence Surveillance Act (FISA) court – a special court of federal judges selected by the U.S. chief justice who may issue warrants in foreign intelligence investigations – to compel the sharing of “any tangible thing” related to a terrorism investigation, including books, business documents, tax records, and library check-out lists.

Before the USA PATRIOT Act, the government was required to identify the place or the particular instrument it wished to search. The Act lowered that standard so the government needed only to show the court that a “significant purpose” of the surveillance was to obtain foreign intelligence information. The American Civil Liberties Union (ACLU), as well as other groups, expressed fears that the government would use this new power to circumvent the stricter probable-cause standard for criminal investigations by citing a foreign intelligence interest. In response, the government stressed that the Act explicitly prohibited the government from targeting suspects who solely exercise their freedom of speech to criticize the government or its leaders. Thus, according to the Act’s defenders, the government, in fact, would need to establish probable cause by showing the target had performed suspicious actions or had participated in activities that would lead others to believe the target was acting as an agent of a foreign power.

After Portland attorney Brandon Mayfield was wrongly jailed on the basis of these newly eased government procedures, they were struck down in 2007 by Judge Ann Aiken of the U.S. District Court for the District of Oregon as a violation of the Fourth Amendment. The provisions were reinstated, however, when the Ninth Circuit Court of Appeals overturned Aiken’s decision in 2009, and they were extended by Congress and President Obama in 2011.

However, in 2013, the media published documents obtained by former National Security Agency contractor Edward Snowden revealed that the U.S. government had allowed the bulk collection of data from U.S. citizens under Section 215. Snowden’s released documents demonstrated that a FISA Court order forced Verizon to turn over customer metadata. In 2015, the Second Circuit Court of Appeals ruled that Section 215 did not authorize the bulk collection of phone metadata. Later that year, Congress renewed Section 215 but amended the law to make plain that instead of the government collecting bulk records, the government could obtain information about individuals from phone companies with the permission of a federal court.

One of the Act’s most controversial provisions bolstered existing law that enabled the FBI to use National Security Letters (NSLs), a type of administrative subpoena or order to appear in court, to demand various records and data without probable cause or judicial oversight. Although many federal agencies routinely used administrative subpoenas for information gathering, NSLs can be used only in terrorism and espionage investigations. Typically, the FBI made a request to a third party such as a bank, communication provider, or consumer credit agency for subscriber and transactional information like a suspect’s name, address, and employment and other records. NSLs did not allow inspection of the content of communications or financial transactions but instead focused on information needed to find out who was in contact with whom. This initial step allowed the FBI to determine whether additional investigation was necessary.

The Act authorized law enforcement to obtain this information through pen register (an electronic device that records phone numbers of outgoing calls from a phone line) and trap-and-trace device (which records phone numbers of calls incoming to a phone line) orders for e-mail as well as telephone conversations. This allowed internet provider (IP) addresses and phone numbers to be disclosed. The pen register and trap-and-trace provision was meant to update existing law that had allowed detectives to examine U.S. postal mail envelopes (but not their contents) for sender and receiver information. Before the USA PATRIOT Act, NSLs could only be issued if the information was “relevant to an authorized foreign counterintelligence investigation” and there were “specific and articulable acts that the person or entity to whom the information sought pertained was a foreign power.” The USA PATRIOT Act loosened the standard to allow NSLs to be issued if the information sought from the recipient was “relevant to an investigation to protect against international terrorism or clandestine intelligence activities” (Section 505). In addition, NSLs could be issued by FBI field offices, as opposed to the previous practice whereby only high-level FBI officials such as the director or deputy assistant director could issue them. Finally, the Act placed a gag order on NSLs, meaning the targets whose information was sought were never notified that their information was being turned over to the FBI.

In the years after the USA PATRIOT Act’s passage, internal Justice Department audits showed that 40,000 to 50,000 NSLs were issued each year, most of them against people in the United States. Before the Act’s passage, only 8,500 NSLs had been issued. Critics charged that this increased level of surveillance of American citizens was a direct result of the USA PATRIOT Act’s changes to the standards under which NSLs could be issued. Initial audits also showed that, in some cases, information about innocent people was mistakenly obtained and uploaded to FBI databases. Later audits found that the problems had been corrected. But the ACLU challenged NSLs in court, arguing that they violated the First Amendment’s freedom of speech guarantee and the Fourth Amendment’s prohibition against unreasonable searches and seizures. Specifically, the ACLU said it was impossible for a target to legally oppose a government action he or she did not know about, and that the gag order prohibited the third parties that hold the information from even consulting with their attorneys.

The ACLU prevailed in court. When the controversial sunset provisions of the USA PATRIOT Act, including the NSL provision, were set to expire at the end of 2005, Congress amended the law to allow third parties who receive NSLs to consult their attorneys. Despite this additional safeguard, additional court challenges led to a 2007 ruling striking down the amended NSL provision because, according the court, meaningful judicial review was still not possible under the gag rule.

In all, the controversies surrounding the USA PATRIOT Act prompted a dialogue among citizens and government about the proper balance between security and privacy. Despite the controversy and court challenges, the law has been repeatedly renewed by Congress and succeeding presidents, and the government has exercised greater investigatory powers in areas that were previously private. Although there has not been a major terrorist attack in America since 9/11, the USA PATRIOT Act continues to be a source of controversy and is routinely cited by critics as an example of excessive government power.

1. The USA PATRIOT Act’s provisions call for citizens to trade some freedoms for greater

2. Critics of the USA PATRIOT Act say it violates the provisions of which amendment(s)?

3. The passage of the USA PATRIOT Act in 2001 was primarily motivated by

5. Publication of the government documents obtained by Edward Snowden showed

“We all also had our own initial reactions, and my first and most powerful emotion was a solemn resolve to stop these terrorists. And that remains my principal reaction to these events. But I also quickly realized that two cautions were necessary . . .

The first caution was that we must continue to respect our Constitution and protect our civil liberties in the wake of the attacks. As the chairman of the Constitution Subcommittee of the Judiciary Committee, I recognize that this is a different world . . . Yet we must examine every item that is proposed in response to these events to be sure we are not rewarding these terrorists and weakening ourselves by giving up the cherished freedoms that they seek to destroy.”

1. This excerpt reflects which continuity in U.S. history?

2. This excerpt about events in the United States was most directly shaped by which world events?