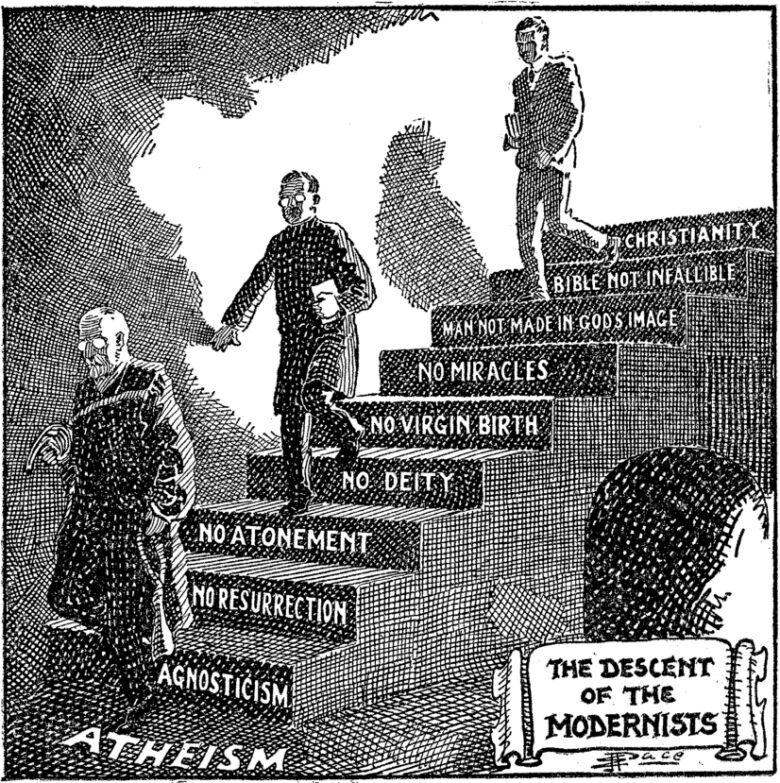 Use this Narrative with the “Silent Cal” Coolidge Narrative to explore the political and culture controversies that occurred during Coolidge’s presidency.

In July 1925, John T. Scopes stood trial in Dayton, Tennessee, charged with teaching to a high school biology class Charles Darwin’s theory of natural selection to explain evolution. The trial was intended as a test of Tennessee’s newly passed Butler Law, which prohibited the state’s public schools and universities from denying the biblical account of creation or suggesting humans had evolved from lower orders of life. The law’s passage had been a victory for William Jennings Bryan, the three-time Democratic presidential nominee and diehard opponent of the gold standard, who, in the 1920s, took up the anti-evolutionist cause with the crusading zeal that had typified his long public career. The American Civil Liberties Union (ACLU), formed in 1920 in response to World War I – era limits on free speech and the right to dissent, saw the Butler Law and the fight to limit the teaching of evolutionary theory as a threat to scientific inquiry and academic freedom. Hoping to challenge the law’s constitutionality and establish whether a state legislature could impose a curriculum shaped by religious beliefs, the ACLU announced it would cover all legal expenses for any Tennessee teacher willing to defy it.

Dayton, a town of approximately 1,800 in eastern Tennessee, had not been known for having any great interest in the evolution debate, but a few business and community leaders seized on the ACLU’s offer in hope that a trial in the town’s county courthouse might boost the local economy. When Scopes, a well-liked, 24-year-old teacher who had briefly substituted for the school’s regular biology teacher, agreed to declare he had taught Darwinian evolution, the ACLU had a defendant and Dayton had a trial.

What developed, however, was one of the great national sensations of the 1920s. First, Bryan, who wanted other states to pass their own anti-evolution laws, announced he would lead the prosecution. This prompted Clarence Darrow, Chicago’s famed trial lawyer, to declare he would lead the defense. For years among the nation’s most revered, and reviled, public figures, the two men had always thirsted for attention. Darrow, a self-proclaimed agnostic, was determined to put Bryan and his crusade against the teaching of evolution on trial. A self-appointed defender of the Christian faith, Bryan, in turn, wanted the same for Darrow’s irreligious modernism. The result was something then quite new in American life: a media frenzy. More than 200 reporters and magazine writers descended on Dayton to send stories across the country, and they were joined by radio transmitters and newsreel photographers. For the better part of two weeks, much of America fixated on Darrow, Bryan, and the town of Dayton.

The Darrow-Bryan spectacle culminated in Darrow’s famous cross-examination of Bryan as an expert witness on the Bible. Neither man was much of a biblical authority, but Darrow pressed tenaciously on whether Bryan accepted a literal reading of the Old Testament. Had a fish swallowed Jonah and then three days later spat him alive back onto land? Had the sun stood still at Joshua’s command? Was it true that all species of animals and human races that populated the earth existed because of Noah and his ark? Were the six days of creation in Genesis actual days or was this metaphorical language? Sometimes Bryan insisted on biblical literalism; sometimes he hedged; often he professed not to know or even to care. The exchange ended bitterly, with Bryan asserting that Darrow and the other defense lawyers had “no other purpose than ridiculing every Christian who believes in the Bible.” Darrow shot back: “We have the purpose of preventing bigots and ignoramuses from controlling the education of the United States”.

Popular accounts have seized on the Scopes trial to portray it as a conflict that pitted an urban-centered and enlightened cosmopolitanism against a closed-minded anti-intellectualism rooted in the small towns of rural America. However, this view obscures and distorts the cultural fault lines that had been building for years, even decades. These fractures were rooted in the swirling advance of modernity, which increasingly privileged scientific inquiry as the fundamental means of knowing and understanding society and the universe.

Another closely related fault line was the divided nature of Protestantism. By the early twentieth century, many theologians and major denominations had accepted a liberal or modern version of Protestantism that deemphasized the concept of divine grace through conversion, while accepting an optimistic view of the potential for individual and social betterment through human agency. One aim of Protestant liberalism was to construct a religion compatible with a larger role for modern science and education in American life. This meant abandoning the belief that the Bible, because it had been divinely inspired, was the literal word of God and, therefore, infallible. Scientific advancement, reformers argued, should be seen not as a challenge to religion but as part of God’s work. In taking such positions, however, believers accepted a more secular, less overtly religious culture.

Conservative and evangelical Protestants saw liberal theology as a denial of the very heart of their religion. Denying the possibility of a supernatural being who shaped daily lives, accepting a larger realm for scientific experts, and questioning the validity of the Bible were heretical views that would rob Christianity of what was fundamental to their faith and marginalize Protestantism as a source of moral values. A broad coalition of “fundamentalist Protestants” formed to fight back, committed, above all else, to the concept of biblical infallibility.

The fundamentalist-modernist divide was a conflict confined to Protestant churches until c. 1915, when it turned into a fierce public battle. Fundamentalists saw German militarism, Soviet bolshevism, radical labor, feminist movements, and other developments as evidence of a growing immorality tied to the advance of secularism. Infused with a militant sense of purpose, they made Darwinian evolution the symbol of a looming moral collapse. Evolution, they argued, was speculative theory unsupported by scientific observation. It masqueraded as science with the intent of denying the biblical explanation of creation and the Bible’s divine nature.

Fundamentalism and anti-evolution sentiment had broad support in northern as well as southern states, but it was the charismatic William Jennings Bryan who made the fight over evolution a national crusade. Evolutionary theory, he feared, would legitimize a brutal struggle for the survival of the fittest with no regard for its undemocratic consequences or for religious morality. And for Bryan “The Great Commoner” the principle of democratic majoritarianism was at the heart of the fight. He argued that citizens of a community or a state, acting through legislative bodies, had the right to decide what was moral or immoral, and that they, rather than distant elites, should decide whether what was taught in public schools reinforced their accepted moral beliefs.

The ACLU, religious modernists, and many scientists challenged the anti-evolutionists. Darwinian evolution, they argued, was an established scientific principle, and to deny its validity would diminish the role of scientific discovery in modern life. They argued as well that the Butler Law violated the First Amendment’s guarantee of the separation of church and state by mandating for all students in public schools a curriculum shaped by one set of religious beliefs. In doing so, the law trampled on the rights of those with opposing points of view, which should be protected even if they were in the minority.

The trial’s legal consequences were inconclusive. The jury found Scopes guilty, but the verdict was subsequently overturned on a technicality by the Tennessee Supreme Court, which ended any hope of further challenges. The Butler Law remained in effect until 1967, but after Dayton, it provoked little controversy. Tennessee had scant taste for another Scopes-like trial, and many of the state’s schools subsequently steered away from the subject of evolution.

The anti-evolution crusade of the 1920s, meanwhile, sustained an insurmountable loss just days after the trial’s end when William Jennings Bryan died in his sleep. His followers fought on, but without Bryan, the movement splintered and lost its hold on conservative Christians. It suffered as well from ridicule by its opponents, which misleadingly reduced both fundamentalism and anti-evolutionism to manifestations of a rural South locked in a backward battle with modernity. Many commentators assumed that after Dayton, fundamentalism would enter a steep decline, but in reality, fundamentalists stepped back from public activism and focused instead on creating a vibrant subculture of institutes, churches, and denominational associations that would reemerge as a major part of American political life in the 1970s.

Those who scorned Bryan and his cause also claimed the Scopes trial marked a turning point in the public’s acceptance of a scientific view of the world. More accurately, however, what developed was an uneasy coexistence. The belief that science was a source of moral decline lost ground. But there remained the question of how to contend with the capacity of science to disrupt ways of life and upend truths once thought settled. This most surely was not resolved in the trial at Dayton.

1. The Butler Law, passed by the Tennessee legislature in the 1920s,

2. In regard to the Scopes trial, William Jennings Bryan believed all the following except

4. The main incentive of Protestant liberalism was to

5. The central issue in the Scopes trial was

“[Mr. Bryan]: I have all the information I want to live by and to die by.

[Mr. Darrow]: And that’s all you are interested in?

[Mr. Bryan]: I am not looking for any more on religion.

[Mr. Darrow]: You don’t care how old the earth is, how old man is and how long the animals have been here?

[Mr. Bryan]: I am not so much interested in that.

[Mr. Darrow]: You have never made any investigation to find out?

Mr. Bryan: Your honor, I think I can shorten this testimony. The only purpose Mr. Darrow has is to slur at the Bible, but I will answer his question. I will answer it all at once, and I have no objection in the world, I want the world to know that this man, who does not believe in a God, is trying to use a court in Tennessee.

Mr. Darrow: I object to that.

Mr. Bryan: (Continuing) to slur at it, and while it will require time, I am willing to take it.

Mr. Darrow: I object to your statement. I am exempting you on your fool ideas that no intelligent Christian on earth believes.”

Transcript of the seventh day of the Scopes Trial, Monday, July 20, 1925

1. Which statement best summarizes the main issue of the Scopes trial?

2. An issue that created a national controversy by pitting traditional interpretations against modern challenges, similar to the one depicted in the provided excerpt, was

3. The excerpt arose from which context?

Lienesch, Michael. In the Beginning: Fundamentalism, the Scopes Trial, and the Making of the Antievolution Movement. Chapel Hill, NC: University of North Carolina Press, 2007.