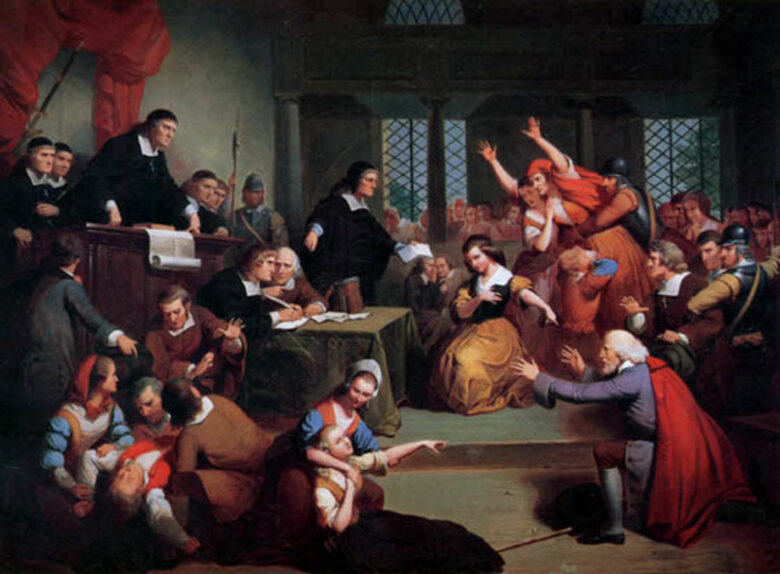 This Narrative should accompany the Anne Hutchinson and Religious Dissent Narrative to explore the topic of religious toleration in the New England colonies.

In January 1692, in the village of Salem, Massachusetts, the nine-year-old daughter and eleven-year-old niece of a contentious minister, Reverend Samuel Parris, began having strange fits and seeing apparitions of local women they said were witches. A doctor diagnosed bewitchment, which meant that others were to blame for the girls’ possession, to which Parris responded with prayer. When this failed, Parris pressured the girls to identify the suspected witches. Meanwhile, other girls in Puritan households had supposedly been afflicted. Soon, three women had been accused of witchcraft, including the slave Tituba, who had performed a counter magical spell by baking a witchcraft victim’s urine in a cake and feeding it to a dog. The three women were arrested and jailed. The accusations gathered momentum and a panic set in.

Villagers were emboldened to voice their own suspicions of other witches, which led to more arrests. The accused were brought to the public meetinghouses and urged to confess so they could be brought back into the Christian fold. Most people gave credence to “spectral evidence”, evidence based on visions and dreams, in which the afflicted claimed they could see invisible spirits flying around the room and causing them pain. Even a four-year-old girl, the daughter of one of the accused, Sarah Good, was imprisoned for witchcraft. Before long, the witch hunt had spread to several neighboring communities.

Some people doubted the wild accusations that were tearing apart the communities. For example, Reverend Cotton Mather, a Boston minister, believed in witchcraft but had initial doubts about the outbreak. He questioned the use of spectral evidence, because in English law it was grounds for suspicion but not proof. Mather offered to provide spiritual guidance to the afflicted and cure their ills through prayer and counseling. Unlike the case in most witch hunts, in this one, only those who refused to confess were hanged, for clinging obstinately to Satan.

In May, the governor of Massachusetts, William Phips, set up a special court to deal with the forty-odd people who had been charged. A wealthy merchant, Samuel Sewall, sat on the court, and Lieutenant Governor William Stoughton presided. Many of the accused were perceived to be outsiders in some way, tainted by association with Quakers, American Indians, and non-English European settlers. People living closer to the town were also more likely to be suspects, as kinship groups and sections of town accused other kinship groups and sections of town with whom they were at odds.

The court convened on June 2 for the first trials, and on the basis of unprovable charges and spectral evidence, Bridget Bishop was found guilty and hanged. One of the judges, Nathaniel Saltonstall, was so outraged by the proceedings that he immediately resigned. A few days later, several clergymen published a statement, “The Return of Several Ministers,” expressing their own dissatisfaction with the use of spectral evidence and asking for greater burdens of proof. Nevertheless, the trials continued despite the travesty of justice that was recognized at the time. The conviction rate was unusually high, mainly because more than fifty suspects confessed, presumably to evade the noose. Puritans saw in the large numbers only mass allegiance to Satan, which, in turn, led to more accusations. The psychological pressures were intense, and some confessed “witches” recanted, thus sealing their fates.

The court convened again in late June, with more than one hundred accused witches in jail. Five more were tried and executed, followed by another five in August, and eight in September, fourteen women and five men. Elizabeth Proctor was found guilty but received a reprieve because she was pregnant. Giles Corey, who refused to plead, was pressed to death beneath a growing blanket of stones; his wife Martha was hanged. The deaths caused profound unease, including among previously enthusiastic ministers and magistrates. Reverend Increase Mather delivered a sermon in which he asserted, “It were better that ten suspected witches should escape, than that one innocent person should be condemned.”

As in European witch trials (where an estimated sixty thousand accused witches were executed in the preceding centuries), the problem was using spectral evidence as proof, which, it was argued, may have been the Devil’s illusion to foment discord. Perhaps Satan’s goal had been not to recruit witches but to trick the court into executing the innocent. Particular weight had been placed on the girls’ testimony and on the confessions of the accused, both of which were unreliable. In late October, the Massachusetts Court called for a day of fasting and prayer for reflection on the hysteria. A few days later, Governor Phips met with Stoughton to decide the fate of the court and decided to halt the trials. The jailed were released.

Samuel Sewall, one of the judges, regretted the role he had played in the witchcraft trials and wondered whether the subsequent misfortunes of his own family, and of all New England, might be divine punishment for shedding innocent blood. In January 1697, he stood bare headed in church in Boston while the minister read the following apology:

Samuel Sewall, sensible of the reiterated strokes of God upon himself and family; and being sensible, that as to the guilt contracted upon the opening of the late commission of Oyer and Terminer at Salem (to which the order for this day relates) he is, upon many accounts, more concerned than any that he knows of, desires to take the blame and shame of it, asking pardon of men, and especially desiring prayers that God, who has an unlimited authority, would pardon that sin and all other his sins, personal and relative; and according to his infinite benignity, and sovereignty, not visit the sin of him, or of any other, upon himself or any of his, nor upon the land. But that He would powerfully defend him against all temptations to sin, for the future and vouchsafe him the efficacious, saving conduct of his word and spirit.

The jurors apologized later that same year. They admitted that, because they had not been “capable to understand nor able to withstand the mysterious delusions of the powers of darkness,” they were “sadly deluded and mistaken” in believing weak evidence and had caused the deaths of blameless people.

The factors that led to the 1692 Salem witchcraft outbreak were indeed complex. Much of the conflict fueling the trials originated in tensions between a traditional Puritan lifestyle based on piety and subsistence farming, and an increasingly worldly, capitalist outlook. Some Puritans complained of “declension” – a waning of godly ideals beginning in the 1630s, when Massachusetts Bay was settled. Friction between town and village had also developed over governance: Villagers resented paying taxes to maintain a distant town church and wanted independence.

The accusations may also have reflected tension between neighbors. Some scholars blame them on the fantasies and hysteria of children, and possibly even ergotism (a form of poisoning from a potentially hallucination-causing fungus that grows on rye) and an encephalitis epidemic. Gender also seemed to be significant: Were propertied women the victims of envious men? The Puritans believed witchcraft was God’s punishment for sin, either by allowing the Devil to convert so many witches or by turning fearful people against innocent neighbors. The Puritans believed in the existence of the Devil and his evil minions, who they thought could intervene in human affairs, tricking some into following them by practicing witchcraft.

The witchcraft outbreak was intensified across New England by political uncertainty during the years between the loss of the Massachusetts charter in 1684 and the granting of a new one by the English crown in 1691. The Glorious Revolution of 1689-1690 led to war with France, which, in turn, reignited war with American Indians in New England. These events all contributed to an atmosphere of profound insecurity and danger, spiritual and physical, though perhaps none really adequately explain the Salem witchcraft outbreak of 1692.

1. During the late seventeenth century and the events surrounding the Salem witch trials, what was considered “spectral evidence”?

2. How was the use of “spectral evidence” in trials of those accused as witches different in the New England colonies and in England?

3. What was the fate of those who confessed to being witches in Salem Village?

4. Why was the conviction rate of accused witches in Salem so high?

5. What event launched the beginning of witchcraft accusations in Salem?

“The humble petition of Mary Easty unto his excellencies Sir William Phipps to the honoured Judge and Bench now sitting In Judicature in Salem and the Reverend ministers humbly sheweth that whereas your poor and humble petitioner being condemned to die do humbly beg of you to take it into your judicious and pious. . . . I would humbly beg of you that your honors would be pleased to examine this afflicted persons strictly and keep them apart some time and like-wise to try some of these confessing witches. I being confident there is several of them has belied themselves and others as will appear if not in this world I am sure in the world to come whither I am now agoing and I question not but you’ll see an alteration of these things they say myself and others having made a league with the devil we cannot confess I know and the Lord knows as will shortly appear they belie me and so I question not but they do others the Lord above who is the searcher of all hearts knows that as I shall answer it at the tribunal seat that I know not the least thing of witchcraft therefore I cannot I dare not belie my own soul I beg your honers not to deny this my humble petition from a poor dying innocent person and I question not but the Lord will give a blessing to your endeavors.”

Petition of Mary Easty to the Court, 1692

1. The view expressed in the excerpt provided reflects the request made by Mary Easty to

2. Which of the following most likely led to the events described in the excerpt provided?

Karlsen, Carol F. The Devil in the Shape of a Woman: Witchcraft in Colonial New England. New York: Norton, 1998.