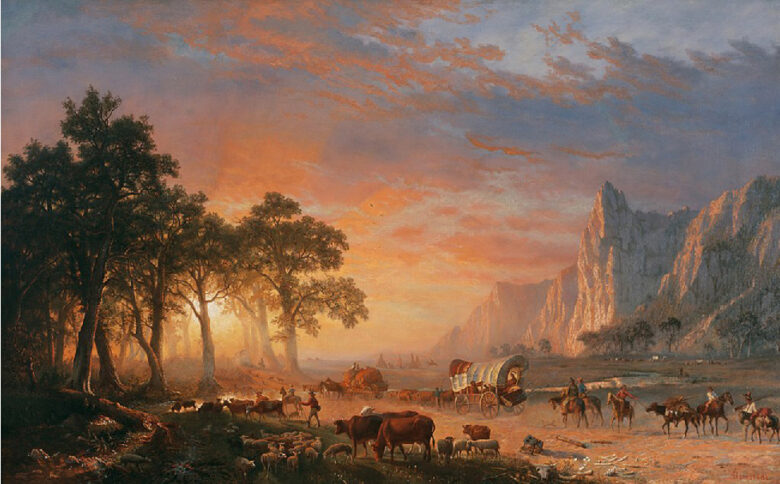 Use this Decision Point alongside the To What Extent Were Manifest Destiny and Westward Expansion Justified? Point-Counterpoint to explore the arguments for the United States’ expansion western to the Pacific coast.

Looking at a map of the modern United States, it is easy to assume that the nation was always destined, in the words of Katharine Lee Bates’s 1893 anthem “America the Beautiful”, to stretch “from sea to shining sea.” Just 50 years earlier, however, the ultimate boundaries of the country were still an open question, the subject of tense diplomacy between the United States and other nations and heated debate at home. The most ardent expansionists, invoking the idea of Manifest Destiny, insisted that God’s chosen people should possess the entire North American continent. During the 1840s, some Democrats were willing to fight Great Britain and Mexico to reach that goal, whereas others hoped to gain territory without bloodshed. Their main political opponents, the Whig Party, expressed doubts about the viability of a continental republic and fears about the extension of slavery into western territories. Growing sectional tensions between North and South made unity impossible even within the major parties.

“Looked at this way,” writes historian Richard White, “American expansion was not as much the outcome of a widely shared belief in manifest destiny as it was the compromised achievement of an incipient nationalism.” Compromise was certainly required in the case of the Oregon country. Faced with a powerful European rival and competing sectional priorities, the Polk administration had to settle for something less than Manifest Destiny dictated. Polk faced a decision about how to navigate the issues of sectionalism, hunger for land, and diplomatic relations while securing territory without going to war, especially with tensions brewing in Mexico.

The “Oregon Question” concerned competing imperial claims to the Pacific Northwest. Russia and Spain had coveted the region since the eighteenth century, but they forfeited their interests in a series of treaties between 1819 and 1825. The remaining contenders, the United States and Great Britain, had reached an agreement in 1818 allowing for joint occupancy. It was a temporary compromise, however, and both nations asserted that Oregon belonged to them by right of discovery. American claims rested on the 1792 voyage of Robert Gray, the first white man to visit the mouth of the Columbia River, followed by Lewis and Clark, who journeyed to the Pacific Ocean in 1805. Britain had also explored the coastline and entered the Columbia, and it enjoyed an advantage on the ground thanks to the presence of the Hudson’s Bay Company outposts in the region.

During the 1830s, mixed-race French Canadians established a small agricultural community in the upper Willamette Valley, where a malaria epidemic had recently decimated the native population. They were soon joined by American Protestant missionaries such as Jason Lee, who sent a petition to Congress in 1838 encouraging American immigration to the region. By 1845, approximately 5,000 American settlers had followed Lee over the Oregon Trail, confident that the Northwest would soon become part of the Union.

“Oregon Fever” gripped the country during the early 1840s, yet only a small minority of Americans braved the long, arduous trek across the continent. Covered wagons took four to six months to make the 2,000-mile journey from Independence, Missouri, to the Willamette Valley. Emigrant trains left in the spring and pushed hard across the Great Plains in hope of clearing the western mountains before winter storms arrived. Although migrants feared Indian attacks along the way, the threat had been greatly exaggerated, and many travelers never saw any American Indians, except the removed tribes the government had pushed beyond the Mississippi River. Disease and accidents were a much greater source of death; the death rate was between 3 and 10 percent.

If all went well, wagon trains reached the Columbia River by early October. After passing a settlement along the river, they could either float the remainder of the distance or (after 1846) take the Barlow Road around Mt. Hood to reach their destination. Given the expense and risks involved, it is not surprising that only about 50,000 emigrants made the trip to the Oregon Country before the completion of the transcontinental railroad in 1869. Far more people settled in the Midwest during this period, but even so, in the Oregon Country, American settlers quickly outnumbered British subjects and clamored for annexation by the United States.

The Democratic Party pushed the issue of westward expansion during the presidential election of 1844. Its candidate, James K. Polk of Tennessee, declared the party would seek the “reoccupation of Oregon and the re-annexation of Texas at the earliest practicable period” (emphasis added). Congress soon voted to annex the independent Republic of Texas, but Polk’s implication that Oregon already belonged to the United States provoked threats of war from Great Britain. The Whig Party, headed by Henry Clay, questioned whether territorial expansion was truly in the nation’s best interest, especially if it added more slave states to the Union. Rather than recklessly “enlarging our field,” Representative Abraham Lincoln of Illinois later said, Americans should focus on “keeping our fences where they are and cultivating our present possession, making it a garden, improving the morals and education of the people.”

Northern Whigs favored federal spending on infrastructure, such as canals and railroads, which would improve the economy of their region. Southern and western Democrats, for their part, considered expansion crucial to the prosperity of their sections and the extension of America’s “empire of liberty.” When the election came, their arguments carried the day, but by one of the narrowest margins in electoral history. Polk received just 49.6 percent of the popular vote, and Clay would have won the Electoral College if not for the abolitionist Liberty Party, which cost him support in New York. Regardless, the Democrats claimed a public mandate to pursue their vision of a continental republic.

In his first annual address to Congress, Polk announced his intention to obtain the whole of the Pacific Northwest, as far north as the boundary of Russian Alaska at 54°40′ latitude. Although the United States had no clear grounds for such an expansive claim, the most militant Democrats adopted the slogan “Fifty-four Forty or Fight!” John L. O’Sullivan, the editor of New York’s Democratic Review, expressed their view when he declared, “The American claim is by right of our manifest destiny to overspread and to possess the whole of the continent which Providence has given us for the development of the great experiment of liberty and federative self-government entrusted to us.”

Polk expressed similar sentiments in public, but privately he sought to negotiate a compromise with Britain. Southern Democrats had little interest in Oregon, which was unsuitable for plantation agriculture, and they worried about losing British markets for their cotton in the event of war. More importantly, Polk wanted to avoid a military clash over Oregon while he confronted Mexico over the cession of California and the boundary of Texas. The British government also hoped to find a diplomatic solution that would prevent a third Anglo-American war and preserve lucrative trade relations with the United States. The Oregon Country seemed less valuable by the 1840s, especially as the supply of furs declined, so why fight over it?

Even so, negotiations nearly broke down several times. As war loomed in the Southwest, Polk proposed a division of Oregon at the 49th parallel, which the British had previously rejected in favor of a boundary along the Columbia River. The British ambassador dismissed the offer out of hand, but his government asked to reopen talks after learning of his decision. Polk responded with more bluster, returning to the demand for a border at 54°40′ north and threatening to nullify the current joint occupation of Oregon. Southern Democrats and most Whigs had no stomach for his brinkmanship, however, and Congress soon invited the British delegation to resume negotiations. The delegation obliged by offering to accept the 49th parallel boundary, with one slight deviation that allowed Britain to keep all of Vancouver Island. Polk submitted their proposal to the Senate, which ratified the Oregon Treaty by a vote of 41 to 14 in June 1846, just as fighting broke out on the Mexican border.

The treaty failed to satisfy all parties or fully resolve competing claims to the new Oregon Territory. Some diehard Democrats criticized President Polk’s retreat from 54°40′ north, and Senator William Allen of Ohio even resigned his seat on the Senate Foreign Relations Committee in disgust. Some northern Whigs also accused Polk of upsetting the sectional balance by annexing Texas but failing to acquire all of Oregon for future free states. Westward expansion thus kept the issue of slavery alive, further dividing the nation rather than uniting it beneath the banner of Manifest Destiny. Meanwhile, Britain and the United States nearly went to war over the precise location of the international boundary in Puget Sound, and several conflicts erupted in the Northwest as American Indian tribes resisted the loss of their homelands. Although the Oregon Question had finally been resolved, it raised even more difficult questions about the future of Oregon Territory and the United States as a whole.

1. American legal claims to ownership of the Oregon Country primarily rested on

2. The slogan “Fifty-four Forty or Fight” best describes which political faction’s position on the Oregon Question?

3. In the Oregon Treaty, Great Britain and the United States agreed to an international boundary at

4. Some Whigs resented Polk’s compromise on the Oregon Question because it

5. The map of the Pacific Northwest illustrates the

6. The greatest threat to those seeking to settle the Willamette Valley in the 1840s was

The Bays and Harbors are all in one end of the country, and the entrance to them bad for eight months in the year, which will always prevent this being a great exporting country; and since the U. S. Government have laid siege to our sister country, California, Oregon will settle but slowly until that beautiful and productive country is all settled. There they have one of the best harbors in the world—the Bay of San Francisco, with an open coast the whole length of the country, and two large navigable streams passing into the interior. With the best of soil for wheat and capable of supporting a greater amount of stock than any other part or portion of the continent of the same extent, and by irrigation will produce all of the necessaries as well as many of the luxuries of life.”

1. This excerpt challenged which prevailing assumption about westward expansion?

2. This excerpt’s message was most directly shaped by the idea of

3. The writer’s sentiments contributed most directly to which of the following?

Jetté, Melinda Marie. At the Hearth of the Crossed Races: A French-Indian Community in Nineteenth-Century Oregon, 1812-1859. Corvallis, OR: Oregon State University Press, 2015.

The West Film Project. “The West, Episode 2: Empire on the Trails.” 2001. https://www.pbs.org/weta/thewest/program/episodes/two/continentalnation.htm

Whaley, Gray H. Oregon and the Collapse of Illahee: U.S. Empire and the Transformation of an Indigenous World, 1792-1859. Chapel Hill, NC: University of North Carolina Press, 2010.

White, Richard. It’s Your Misfortune and None of My Own: A New History of the American West. Norman, OK: University of Oklahoma Press, 1991.