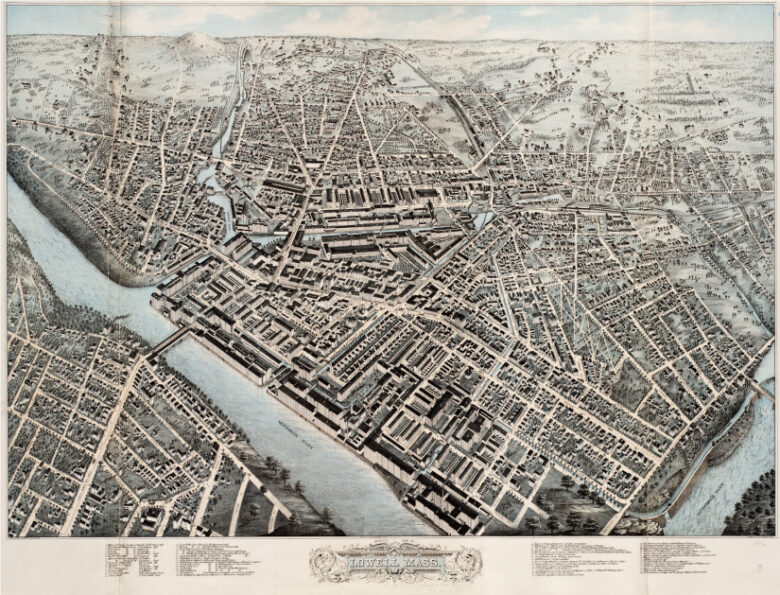 This Narrative focuses on the spread of industrialism and can be used with the Urban Game Simulation Lesson.

Samuel Slater’s construction of a water-powered spinning mill in Rhode Island in 1790 was an early herald of the wave of manufacturing that swept across New England after the War of 1812. The process helped stimulate the transformation of the United States from the mostly agrarian society Thomas Jefferson had envisioned to the dual agricultural and manufacturing giant of which George Washington had dreamed. Although industrialization was a gradual process, it profoundly affected the economy and society of the United States. One of the first indications of change occurred in the 1830s and 1840s with the emergence of the factory system and a new and vocal sector of working-class women in and around Lowell, Massachusetts.

Women had actively participated in the U.S. workforce before industrialization. In 1820, more than 90 percent of the population lived in the countryside or in villages of fewer than 2,500 inhabitants; more than 70 percent engaged in agriculture. But rural workers did not just milk cows and till fields. As in Europe, women did most manufacturing in the pre-industrial era inside their homes. Small Rhode Island spinning mills that followed Slater’s example employed whole families on site (including children) but outsourced much of the final stages of production to laborers who toiled at home. This was the so-called Rhode Island or outwork system. Female domestic workers dominated this form of textile production at the beginning of the nineteenth century, producing more than two-thirds of the clothing manufactured in the United States.

Working conditions were hard. In addition to sewing, knitting, and weaving, women working at home had to bear and raise children, prepare food, carry out domestic chores, and manage many aspects of household finances. Nor did they get to enjoy the proceeds of their own labor except in common with their families. Their legal rights, particularly in the ownership of property, were severely limited. In such circumstances, opportunities to work outside the home in the large, new textile factories arising in New England after 1814 looked attractive to many young, single women.

Boston merchant Francis Cabot Lowell visited Great Britain just before the War of 1812 began, closely observing the new technologies at use in the growing factories there. Unable to legally obtain printed specifications of these technologies, Lowell, like Samuel Slater, carried them in his mind instead. In 1813, he and master mechanic Paul Moody succeeded in replicating a British power loom. Afterward, Lowell partnered with other merchants to create the Boston Manufacturing Company and build a large textile mill in Waltham, Massachusetts.

The old water-powered spinning mills produced yarn that workers finished at home on hand looms. The power loom allowed all this work to be finished in one process. In addition to being ten times larger than any of the Rhode Island mills, the Waltham plant efficiently concentrated all the steps of the cotton manufacturing process at one location, an organizational method called vertical integration. The creation of the plant itself encouraged technological innovations to the spinning machines that improved productivity from year to year. And the plant employed almost no children. Instead, Lowell and his colleagues chose to recruit a workforce of young, single women.

The new process, later dubbed the factory system, was incredibly successful despite British efforts to dump cheap textiles in the North American market after the end of the war in 1815. From its founding until 1823, Boston Manufacturing Company’s sales increased from $3,000 annually to more than $300,000. In the 1820s, mills and mill settlements expanded along the Merrimack River in Massachusetts. The most important of these settlements, the town of Lowell, was named in honor of the company’s founder, who died in 1817. Its population soared from six thousand in 1830 to thirty-three thousand in 1850, making it second in population in Massachusetts only to Boston.

Control of almost all these mills was concentrated in the hands of a few magnates known as the Boston Associates, who worked together on common policies for technology, which they shared, and for labor, including wages and working conditions. Competition among the Associates was frowned upon. They appointed an agent to represent them in Lowell, working closely with him to ensure that every aspect of the factory system was managed efficiently.

Eighty to 90 percent of the mill workers were women, and they came to be known as the Lowell Girls. Almost all were single and from rural or small-town families of modest means. Evidence from testaments published in their own periodical, the Lowell Offering, suggests they entered the factory system not under orders from their families or driven by want, but because they wanted to better their own lives and earn money before they married. In consequence, female mill workers tended to marry much later than other women. Their work also exposed them to new experiences that made them less likely to retain their parents’ values. And when they left the mills, they tended to settle in large towns rather than returning to farms.

The women made sacrifices, too. Unlike domestic industries, the factory environment was highly regulated. Women worked six days a week for twelve hours per day, with only three holidays and Sundays to rest. They had to work at least a year in any job and give two weeks’ notice before departure. If anyone violated these terms, the Lowell magnates made certain she never worked in their factories again. The work was repetitive and could be dangerous. Penny-pinching managers also regulated every moment of the work day to ensure maximum productivity, essentially cutting laborers off from the outside world. Women rarely held supervisory responsibilities and were employed in part because of the low wages they accepted.

The Lowell manufacturers required their female workers to board together in brick company housing, built in the 1830s to replace earlier ramshackle wooden structures. Up to forty women lived in a typical boardinghouse, with up to eight per room and two per bed. The houses were kept clean and reasonably comfortable, and the meals were adequate and regular. However, the women were expected to adhere to strict rules designed to ensure moral living, including regular church attendance. Boardinghouse keepers attempted to enforce these rules but could not be everywhere at once.

Ultimately, the women developed their own community values. Through toiling and boarding together in company housing, and by producing their own literature, they created a sense of shared culture and experience. Although they did not fight the system as it stood, when the Boston Associates colluded to reduce wages in 1834 and 1836, the women went on strike. They did so in the context of a wider pattern of labor organization and unrest across the country that occurred in conjunction with the rise of the factory system.

By the 1840s, labor activism among the Lowell Girls had become fairly constant. The Ten-Hour Movement emerged during that decade as the women petitioned the state legislature every year to reduce the working day by two hours, and the Lowell Female Labor Reform Association (LFLRA) was formed in December 1844. This group, well organized and eventually offering sickness insurance to members, became a fully integrated and active component of larger New England labor organizations such as the New England Workingmen’s Association (NEWA). The NEWA made the newspaper Voice of Industry its organ in 1845, and the LFLRA’s president Sarah Bagley became a member of the paper’s three-person committee. Workers did not always agree. Activists usually remained in the minority, competing with conservatives who published their opinions in the Lowell Offering. Still, the scale of this women’s labor movement was unprecedented, even though the Ten-Hour Movement did not secure any meaningful concessions at this time.

Shrugging off labor agitation, the Boston Associates continued to grow, with output doubling between 1850 and 1860. The social implications were tremendous. By 1860, approximately 41 percent of the U.S. workforce labored outside agriculture, and standardized production of cotton textiles and footwear in the factory system had become the norm. In New England, the creation of factories produced a shift to urban environments, with 36 percent of people in the region living in cities or other large settlements by 1860. Approximately sixty thousand women worked in large textile mills in New England by this time. The factory system also fostered immigration; in the wake of the Irish famine of 1846-1852, thousands of Irish women moved to Lowell. Irish men, women, and children worked in the factories but were not provided the housing, churches, and other services. By 1860, they made up perhaps 50 percent of the Lowell factory workforce.

2. The Boston Associates were

3. What impact did the Lowell Girls have on the development of a labor movement in the newly industrial Northeast?

5. Which statement best describes the Lowell Girls in comparison to New England women that did not work in the mills?

6. Most manufacturing in the pre-industrial era was done

7. The industrial advantage created by the Boston Manufacturing Company in 1813 was that

“The operatives are well dressed, and we are told, well paid. They are said to be healthy, contented, and happy. This is the fair side of the picture. . . . There is a dark side, moral as well as physical. Of the common operatives, few, if any, by their wages, acquire a competence . . . the great mass wear out their health, spirits, and morals, without becoming one whit better off than when they commenced labor. The bills of mortality in these factory villages are not striking, we admit, for the poor girls when they can toil no longer go home to die. The average life, working life we mean, of the girls that come to Lowell, for instance, from Maine, New Hampshire, and Vermont, . . . is only about three years. What becomes of them then? Few of them ever marry; fewer still ever return to their native places with reputations unimpaired. ‘She has worked in a Factory,’ is almost enough to damn to infamy the most worthy and virtuous girl.”

“We stopped at the large stone house at the head of the falls of the Merrimack river, and having taken a little refreshments; went down among the factories. The dinner bells were ringing, and the folks pouring out of the houses like bees out of a gum. I looked at them as they passed; all well dressed, lively, and genteel in their appearance; indeed, the girls looked as if they were coming from a quilting frolic. . . .

I could not help reflecting on the difference of condition between these females, thus employed, and those of other populous countries, where female character is degraded to abject slavery. Here were thousands, useful to others, and enjoying all the blessings of freedom, with the prospect before them of future comfort and respectability: and however we, who only hear of them, may call their houses workshops and prisons, I assure my neighbours there is every enjoyment of life realized by these persons, and there can be but few who are not happy.”

Observations of Lowell by Davy Crockett

1. Which of the following best describes the context surrounding the situation described in these excerpts?

2. Workers like those described in the first excerpt sought to change working conditions by

3. According to excerpt 2, the factory girls were

Moran, William. The Belles of New England: The Women of the Textile Mills and the Families Whose Wealth They Wove. New York: St. Martin’s Press, 2002.