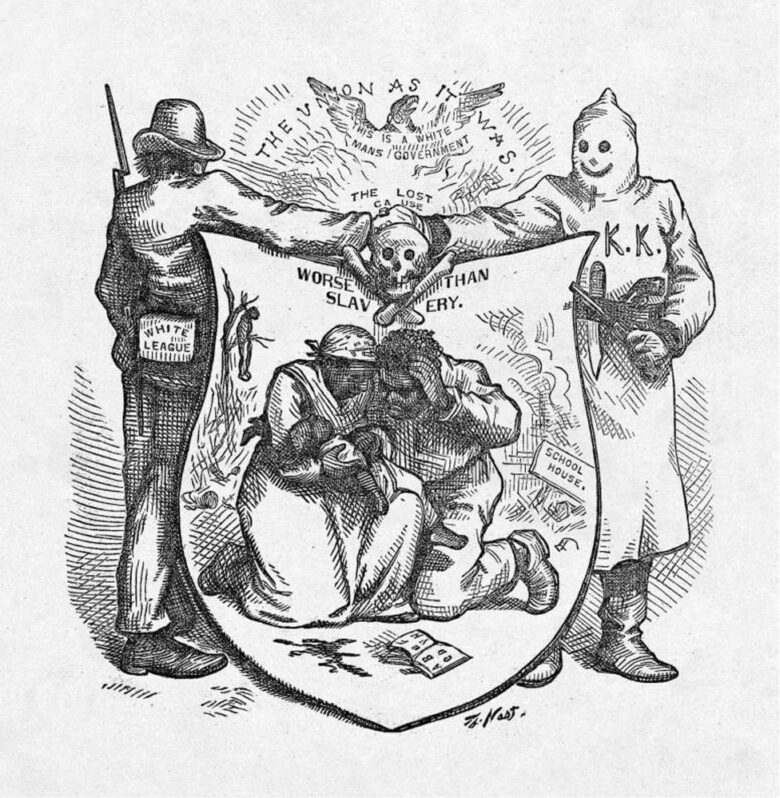 After the Civil War, legal and economic changes paved the way for new political opportunities for freed black men. Not only had the Reconstruction Amendments – the Thirteenth, Fourteenth, and Fifteenth Amendments aimed at securing basic liberties and rights for African Americans after the Civil War – abolished slavery and recognized freed blacks as citizens entitled to due process and equal protection of the laws, they also gave freed black men the right to vote and even hold political office. In 1870, the Fifteenth Amendment was ratified and provided constitutional protections for black men’s right to vote. Increased political and economic opportunities for freed black men in the South were curtailed by white supremacy characterized by intimidation and violence. In postwar Louisiana, for example, white violence undermined black civil and political rights.

After the war, black civil rights groups proliferated throughout postwar Louisiana, including the Equal Rights League and more than 120 Union League clubs. From 1867 to 1868, Radical Republicans and their black allies at the national level secured a number of protections for freed people, including federal requirements for enfranchising black men. These victories were reflected at the local level. In 1868, Louisiana’s state constitutional convention, comprised of roughly equal numbers of black and white delegates, wrote a new constitution including suffrage for black men in order for the state to be readmitted into the Union on the basis of the requirements of the Reconstruction Acts of 1867. That same year, voters elected a black Republican, Oscar Dunn, lieutenant governor.

These political victories for African Americans spurred the development of a fierce and violent countermovement among white supremacists, who began organizing into opposition groups. Chief among these groups was the Ku Klux Klan (KKK), formed in Pulaski, Tennessee, in 1865 as a social club for former Confederate soldiers. By 1868, the Klan had evolved into a hooded terrorist organization responsible for murdering thousands of free blacks and their white Republican allies. In the period leading up to the 1868 presidential election, the Klan’s activities expanded across the South, using threats of violence, beatings, and worse to intimidate Republican voters. A campaign of widespread terror took hold as the presidential election neared. In Kansas, there were more than 2,000 politically motivated murders. In Georgia, the number of threats and beatings was even higher. And in Louisiana, 1,000 freed people were killed.

Violence surrounding the 1868 election thwarted reform efforts by preventing Republicans from voting. New Orleans had 21,000 voters registered as Republicans, but only 276 people cast votes for the Republican candidates because voters were intimidated and threatened with violence. Despite Democratic victories in states like Louisiana, Kansas, and Georgia, Republicans ultimately prevailed in the 1868 presidential election and sent Ulysses S. Grant to the White House.

A considerable uptick in white violence played a significant role in the 1872 election. In Louisiana, a conflict over the 1872 gubernatorial election between Republican William Kellogg and Democrat John McEnery led to violence at the local level. One of the bloodiest episodes during the Reconstruction period occurred in the Colfax Massacre in April 1873.

When a large group of Republicans and freed people gathered at the Colfax, Louisiana, courthouse, armed and angry Democrats assembled and ordered the people to vacate the building. The armed group then set the courthouse on fire, forcing some blacks to surrender at gunpoint. Those who did not perished in the flames or were shot as they emerged. Between 70 and 150 African Americans were massacred.

The story of the Colfax massacre, and the threat that it might occur elsewhere, chilled Republican political ambitions throughout the South. Republicans and their black allies were often threatened with violence or death if they ran for office. Such violence played a major role in bringing about an untimely end to Reconstruction and the political hopes of the black community.

After the passage and ratification of the Fifteenth Amendment, Congress, with the support of President Ulysses S. Grant, embarked on an extensive legislative program aimed at better protecting freed people from politically motivated violence. Congress passed the Enforcement Act of 1870 (also known as the Civil Rights Act of 1870 or the First Ku Klux Klan Act), which “provided criminal penalties for individuals attempting to prevent African Americans from voting by using or threatening to use violence or engaging in other tactics.” In February 1871, a second enforcement act – the Enforcement Act of 1871, or the Second Ku Klux Klan Act- law, placing the administration of national elections under the control of the federal government. The law also empowered federal judges and U.S. marshals to supervise local polling places. In March 1871, President Grant wrote to Congress urgently asking them to draft a law giving him more power to deal with the KKK:

A condition of affairs now exists in some of the States of the Union rendering life and property insecure . . . That the power to correct these evils is beyond the control of the State authorities I do not doubt . . . Therefore I urgently recommend such legislation as in the judgment of Congress shall effectually secure life, liberty, and property and the enforcement of law in all parts of the United States.

Despite opposition to Grant’s request, Congress enacted a third enforcement act in April, the Ku Klux Klan Act of 1871. Congress granted the president power to use the army or suspend habeas corpus to ensure equal protection of the laws for African Americans.

In October, Grant cracked down on the Klan, specifically targeting the worst KKK activity in South Carolina. He used his powers under the KKK Act of 1871 to suspend habeas corpus and send federal troops to South Carolina. Several hundred suspected Klan members were arrested and hundreds of others were driven off. Grant’s actions disrupted the Klan network and clearly demonstrated to the South that the federal government had the power and determination to intervene on behalf of the rights of freed people. Many of the Klan members accepted plea bargains, and most of the sentences for those convicted were fairly moderate.

The enforcement legislation passed during Grant’s administration was also quickly challenged in the courts, and the Supreme Court dealt a number of heavy blows to the political rights of freed people. In the Slaughterhouse Cases (1873), the Court narrowly defined the “privileges and immunities” of federal citizenship, and found that the Fourteenth Amendment had not been intended to expand federal powers over the states. As a result, civil rights cases would not be heard in friendlier federal courts, but rather in state courts, where civil rights violators were less likely to be convicted.

In United States v. Cruikshank (1876), the Supreme Court struck down the Enforcement Act of 1870 on the grounds that the Fourteenth Amendment only applied to civil rights violations by the states and not those of private citizens, leaving black citizens at the mercy of unsympathetic state courts.

In the aftermath of Grant’s actions and the Supreme Court’s decisions, the Klan used less brutal means to intimidate black voters, though violence against African Americans continued. But in one state after another, emboldened by the Supreme Court’s narrow view of the Reconstruction Amendments, white majorities reclaimed political control and passed laws, poll taxes, and grandfather clauses and even amended state constitutions to disfranchise the freed people.

1. One of the most violent anti-African American incidents of the post-Civil War era took place in

2. The Enforcement Acts were passed to

3. The main decision in the Slaughterhouse Cases (1873) stated that

5. With the Supreme Court’s narrow interpretations of the Fourteenth and Fifteenth Amendments, by the late 1870s

“Was it the purpose of the fourteenth amendment, by the simple declaration that no State should make or enforce any law which shall abridge the privileges and immunities of citizens of the United States, to transfer the security and protection of all the civil rights which we have mentioned, from the States to the Federal government? And where it is declared that Congress Shall have the power to enforce that article, was it intended to bring within the power of Congress the entire domain of civil rights heretofore belonging exclusively to the States?

All this and more must follow if the proposition of the plaintiffs in error be sound. . . . The effect is to fetter and degrade the State governments by subjecting them to the control of Congress in the exercise of powers heretofore universally conceded to them of the most ordinary and fundamental character. . . .

We are convinced that no such results were intended by the Congress which proposed these amendments, nor by the legislatures of the States which ratified them.”

“The question presented is, therefore, one of the gravest importance, not merely to the parties here, but to the whole country. It is nothing less than the question whether the recent amendments to the Federal Constitution protect the citizens of the United States against the deprivation of their common rights by State legislation. In my judgment the fourteenth amendment does afford such protection, and was so intended by the Congress which framed and the States which adopted it.”

1. The opinions expressed in the two provided excerpts differ with regard to

2. The main argument expressed in the decision of the Slaughterhouse Cases in 1873 was that

3. The main argument of the decision expressed by dissenting Justice Field was that

“13th Amendment to the U.S. Constitution: Abolition of Slavery (1865).” https://www.ourdocuments.gov/doc.php?flash=false&doc=40

Barnes, Donna A., and Catherine Connolly. “Repression, the Judicial System, and Political Opportunities for Civil Rights Advocacy During Reconstruction.” The Sociological Quarterly40, no. 2 (1999): 327-345.

“Grant, Reconstruction and the KKK.” PBS, “The American Experience.” http://www.pbs.org/wgbh/americanexperience/features/grant-kkk/

“Landmark Legislation: The Enforcement Acts of 1870 and 1871.” www.senate.gov/artandhistory/history/common/generic/EnforcementActs.htm