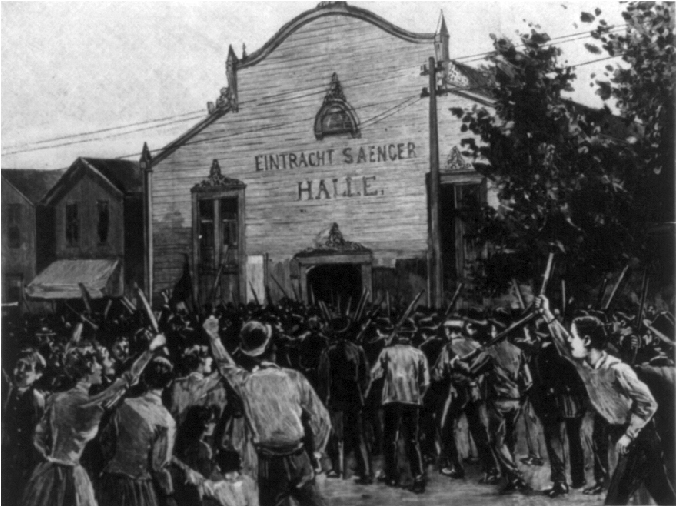 Use this Narrative after students have read the Andrew Carnegie and the Creation of U.S. Steel Narrative to show how industrialization and the concept of employee rights emerged in the Gilded Age.

Tensions between steel workers and management were the immediate causes of the Homestead Strike of 1892 in southwestern Pennsylvania, but this dramatic and violent labor protest was more the product of industrialization, unionization, and changing ideas of property and employee rights during the Gilded Age. The story of the Homestead Strike begins with Andrew Carnegie, who revolutionized the production of steel in 1885 when he integrated the Bessemer process of purifying and strengthening iron into his own operations. In 1892, Carnegie launched the Carnegie Steel Company, a conglomeration of feeder industries and steel plants, including the Homestead Steel Works.

Many Americans lauded men like Carnegie for their innovation and ingenuity, but workers in the mills feared industrialists would increasingly turn to sophisticated technology to achieve maximum output, jeopardizing their job security and authority. The Amalgamated Association of Iron and Steelworkers (AA) represented skilled workers in the steel mills throughout southwestern Pennsylvania and negotiated their relationship with management. Workers organized into the AA in 1881 at the Pittsburgh Bessemer Steel Works (which Carnegie purchased in 1883) after management increased hours while refusing to adjust pay. The AA went on strike at Bessemer Steel in 1882 to prevent management from using a nonunion clause in workers’ contracts, and at the Homestead Steel Works in 1889 after negotiations with management failed. Members were not afraid to act violently in pursuit of their goals, attacking workers brought in to break the strike and also fighting against local police.

Not everyone who worked for Carnegie was as willing to let the AA wrest so much power from the hands of management. Carnegie placed Henry Clay Frick in charge of operations at his various steel works in 1891 and in doing so, shifted the momentum in the power struggle between labor and management. Frick despised unions, particularly the AA. “The mills have never been able to turn out the product they should, owing to being held back by the Amalgamated men,” he stated in a letter to Carnegie. Although Carnegie did not publicly condemn unions, he agreed with Frick that the AA (which represented 800 workers at Homestead) was hurting output. With Carnegie’s support, Frick set his sights on breaking the union.

Relations between workers and management remained tense yet productive until early in 1892, when both the AA and Frick turned their attention toward the expiration of the current labor contract in June. Negotiations became volatile in February, with the AA demanding wage increases to match Carnegie’s financial success. Frick vehemently disagreed and went so far as to suggest a decrease in wages. Was Frick hoping for a strike by countering with such an audacious offer? Although Carnegie had ordered an increase in production at Homestead to make it through a potential strike, Frick was more interested in weakening the influence of the AA and reasserting management’s power. When the AA refused to accept Frick’s offers by April, Frick informed leaders that he would continue to negotiate for another 29 days. If within that time the AA failed to enter into a contract, Carnegie Steel would no longer recognize the union. Laborers and management were staring down a strike when the AA rejected Frick’s final offer of a modest increase in wages in May.

With no contract in hand, Frick ordered the mill on lockdown and installed snipers as guards, turning the work site into a fortress impenetrable by any workers. On June 30, the AA officially went on strike and declared management had violated the existing company contract. Mechanics and transportation laborers at Homestead organized by the Knights of Labor (a national union dedicated to abstract goals of republicanism and workers’ rights) joined the AA, as did other workers across Carnegie’s company in the Pittsburgh area. The strikers declared “that it is against public policy and subversive of the fundamental principles of American liberty that a whole community of workers should be denied employment or suffer any other social detriment on account of membership in a church, a political party or a trade union.” To prevent Frick’s strikebreakers from entering the mill (“Fort Frick” as it became known) and to hold true to their statements, the laborers patrolled the area in military-style brigades.

The AA’s determination to keep the plant closed led Frick to retaliate. He turned to the Pinkerton Detective Agency (a private security organization) and called on 300 of its agents to safely bring strikebreakers in to reopen the plant on July 6. Frick’s decision was not unusual at this time; Pinkertons became the protectors of private property during the late nineteenth and early twentieth centuries. At Homestead, they boarded barges on the Ohio River and attempted a water landing at the mill on the night of July 5. They had hoped to be able to complete their mission secretly, but they were met by a large crowd of strikers and their supporters at the mill. Strikers also boarded rafts to try (unsuccessfully) to set fire to the Pinkertons’ barges. Angry mobs tore down the fence surrounding the mill and climbed on higher structures to pelt the Pinkerton guards with rocks.

At one point amid the chaos, shots were fired. Disputes persist over who fired first a striker or a Pinkerton but a violent exchange ensued in which the Pinkertons fired into a crowd of strikers and the crowd returned the shots. Almost a dozen strikers and Pinkertons were killed. By that afternoon, a crowd of 5,000 supporters from nearby mills had arrived at the site, prompting the Pinkertons to send up a white flag from one of the barges and surrender. Amalgamated Association leader Hugh O’Donnell assured the Pinkertons they would be allowed to leave town safely. However, he and other members of the AA marched the Pinkertons through the town to the Opera House, where they were held in a makeshift jail until Sheriff William McCleary arrived. A massive crowd hurled insults and stones at the Pinkertons as they proceeded to the jail and strikers clubbed two until they were unconscious. Sheriff McCleary and other town officials simply looked on as the crowd assaulted the Pinkertons.

While violence ensued in the streets of Homestead, the leaders of the AA met with Sheriff McCleary in hope of convincing Frick to negotiate and end the strike. Frick refused to meet, however, choosing instead to hold out for the possible intervention of the Pennsylvania state militia. The strikers eventually released the Pinkerton agents to Sherriff McCleary, who escorted them to Pittsburgh (where they were not charged with any crimes), but the workers showed no signs of allowing Frick to reopen the mill.

Amalgamated Association leaders traveled to the state capital in Harrisburg to meet with Governor Robert Pattison and assure him that order had been restored in Homestead and that there was no need for militia involvement. Pattison was wary of sending the militia to an area that was so heavily influenced by the AA and feared a massacre would ensue. But he was also in the pocket of pro-Carnegie political machines that had ensured his election to the highest office in Pennsylvania. Thus, he ordered the militia to Homestead on July 7. The strikers attempted to meet the troops peacefully, but more than 4,000 guardsmen successfully pushed them back and allowed strikebreakers to enter the mill.

The Homestead Strike collapsed after the arrival of the state guard. The American Federation of Labor (AFL) and its leader Samuel Gompers attempted to hold boycotts at Homestead recruiting stations across the country, but Frick was able to hire replacement workers regardless and reopen the mill by July 15. To protect the workers and the mill, the governor placed Homestead under martial law. In an odd twist of events in Frick’s favor, an anarchist named Alexander Berkman, who later edited a journal for political activist Emma Goldman, gained access to his office on July 23 and attempted an assassination. Frick survived, and public opinion turned against the strikers despite there being no connection between the assassin and the AA. With waning public support, the AFL refused to further intervene in the strike, and many of the workers of the AA went back to their jobs. The AA agreed to end the week-long strike and accept management’s terms.

Frick and Carnegie Steel pursued compensation in court for property damage at the mill. Sixteen of the strike’s leaders were arrested for conspiracy, inciting riots, and murder; all were held for one night in prison and forced to post $100,000 bail to be released. Four AA members went to trial on the charges, but only one was convicted.

Carnegie Steel effectively broke AA’s power in the steel industry. The AA continued to have small yet active memberships through World War II, but its influence would never return to what it was during the Gilded Age. The use of physical force and intimidation by workers and management affected public opinion of labor unions; many came to view strikes as unnecessary and violent acts.

1. The Amalgamated Association of Iron and Steel Workers eventually called off the Homestead Strike because

2. An important cause of the Homestead Steel Strike in 1892 was that

3. The most significant cause of the troubles that led to the Homestead Steel Strike of 1892 was

4. At the time of the Homestead Steel Strike, Henry Clay Frick was

5. Henry Clay Frick’s ultimate goal in regard to the Iron and Steel Workers union was to

6. The ultimate result of the Homestead Steel Strike could be described as a victory for

“Was this man [Henry Clay Frick] placed in power by Andrew Carnegie in order to carry out at Homestead what he had carried out in the coke regions; to challenge organized labor by the submission of conditions which it could not accept and, on its refusal, try the old game of crushing the unions under foot? Did Carnegie shrink from the task himself and pick out Frick as a willing and capable instrument? Such were the questions discussed in the lodge-room [a lodge’ is a local union organization] and in the privacy of the domestic circle at Homestead during the time which intervened between the re-organization of the Carnegie interests and the next annual signing of the wage scale. Whatever conclusions might be reached, there was one thing certain at all events, in the not too penetrating judgment of the unionists: Frick might reduce wages, and Frick might fight, but Frick could not repeat in conflict; with the 3,800 brawny and intelligent artisans at Homestead the comparatively easy victories which he had gained over his poor coke workers. So said they all, and they believed it, too, as firmly as if it were Holy Writ.”

Arthur G. Burgoyne, Homestead: A Complete History of the Struggle of July, 1892, between the Carnegie·Steel Company, Limited, and the Amalgamated Association of Iron and Steel Workers, 1893

1. Which of the following most strongly influenced the events described in the excerpt?

2. During the second half of the nineteenth century, which of the following was the most common outcome of events like those described in the excerpt?

3. According to the excerpt, the union at the Homestead plant believed Frick would be unsuccessful in breaking their strike because

House Judiciary Committee. “Investigation of the Employment of the Pinkerton Detectives in Connection with the Labor Troubles at Homestead, PA.” Washington, DC: Government Printing Office, 1892. https://archive.org/details/92InvestigationofpinkertonV1