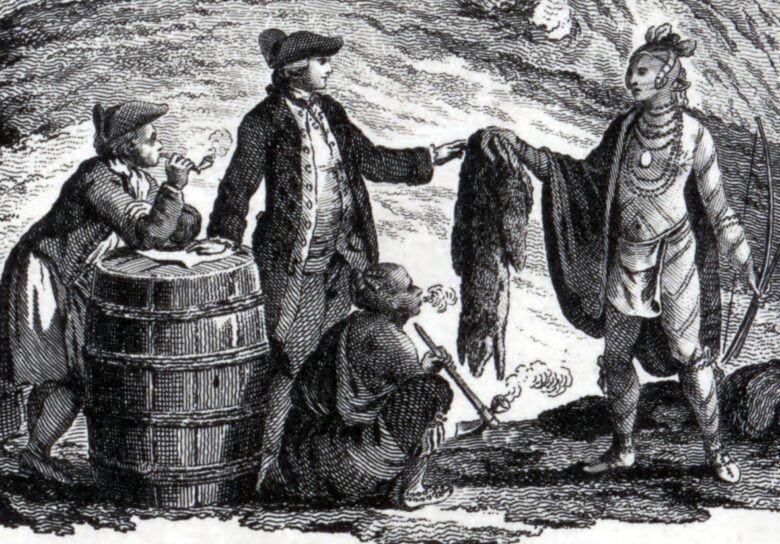 This Narrative should be assigned after the Chapter 2 Introductory Essay: 1607-1763  so students will be familiar with European motivations for exploring and then settling in the New World.

In the sixteenth and seventeenth centuries, European explorers of North America competed to find a Northwest Passage to the East Indies and precious metals such as gold and silver. They did not succeed, but they did encounter American Indians who traded ample amounts of beaver and other pelts with them. The valuable fur trade thus became part of the search for wealth in the New World and the imperial struggle among the great powers. Over the course of the next century, the fur trade fundamentally reshaped American Indian life, relationships with Europeans, and even the North American ecological landscape.

The early European explorers and fishermen who roamed the Atlantic coast in the 1500s traded knives, copper kettles, and beads to the American Indians for beaver, fox, otter, lynx, mink, and other furs. Both sides in these trades were shrewd; the American Indians hunted furs easily and, in return, acquired items they wanted, while the Europeans thought the Indians accepted trifles for furs that fetched high prices in Europe. The trade helped shape their relationships over the next two centuries.

When the Europeans came, there were an estimated sixty million to two hundred million beavers in North America. The animals had a beneficial effect on the environment, because their dams served as a means of flood control and created ponds with rich silt that made for fertile soil. The American Indians hunted them with bows, primarily for their fur and meat, and generally killed only as many as they needed. They supplied the traders with furs in increasing numbers because Europeans wore them as fashionable hats.

The fur trade reshaped American Indian life, however. Indians acquired brass kettles, axes, hatches, farm implements, and metal fishing hooks that altered the way they lived. Firearms changed the way they hunted and the way they went to war with each other and with Europeans. Wider trade networks brought once-isolated American Indians into contact, helping diseases to which they were vulnerable, such as smallpox, spread more easily. Once they realized the Indians would trade for wampum (white and purple beads shaped from shells), the Europeans acquired it from coastal Indians to trade with interior tribes for furs. Thus, American Indians made and acquired greater amounts of wampum, causing it to then decline in value as a medium of exchange. They began to consume alcohol obtained from Europeans, at first using it for spiritual trances but then drinking it in destructive quantities. Finally, American Indians began to wear European clothing they acquired through trade.

The fur trade was not one-sided, and it created a mutual dependency. Because Europeans depended on American Indians to supply thousands of furs to trading posts and colonial settlements, the fur trade linked the Indians to the broader Atlantic system of trade through a valuable commodity that was easily transportable. The Indians could play the Europeans off against each other or force them to help some native tribes battle others to maintain the fur trade. For example, the Huron and Algonquian compelled the French to fight against the Five Nations Iroquois. Moreover, French, Dutch, and English settlements were often affected by the geography of the fur trade. The focus on the fur trade meant that the French in Canada developed simple trading posts in Quebec and Montreal rather than large colonies with many settlers. Trading posts began to spread to the Great Lakes and Ohio Valley by the mid-eighteenth century, which helped cause the French and Indian War when the English wanted to seize control of the lucrative fur trade. The Dutch settled in Albany and then in Manhattan as the Dutch West India Company entered the fur trade and built fortified settlements to protect it. The English moved into the Connecticut Valley in part because of the fur trade. European colonists also routinely raided each other’s trading posts to control the fur trade throughout the colonial period.

Sometimes the fur trade helped create intimate relations between the American Indians and Europeans. The French were generally noted for living among the Indians, learning their languages, and treating them more respectfully than did the English. In time, some daring, young, entrepreneurial backwoodsmen known as coureurs de bois (“runners of the woods”) paddled canoes along the frontier to hunt their own furs. They learned Indian ways, languages, and hunting methods, and some married Indian women. Sometimes, however, Indians saw them as competitors and bloody conflicts resulted.

By the 1660s, there were troubling signs that beaver and other animal populations were in decline because of the tremendous demand. In one six-year period, for example, the trader William Pynchon alone bought nine thousand beaver furs and hundreds of moose, otter, raccoon, muskrat, and other furs. American Indians hunted growing numbers of animals, especially when they acquired firearms and brass and iron for arrows from the Europeans, and wiped out local animal populations. As they traveled farther to hunt pelts, they came into conflict with other tribes, causing wars to break out or traditional alliances and trade partnerships to shift. In the next few decades, changing fashion led to declining European demand for furs, which, in turn, affected imperial rivalries and relationships with native people. Meanwhile, the effects of declining animal populations like beavers upset local ecosystems, which affected humans.

The fur trade had widespread economic, strategic, cultural, and environmental effects upon the landscape of North America and the many different people who inhabited the continent. The American Indians and the Europeans all acted in an economically and strategically rational manner, seeking to acquire the goods they needed and wanted. Still, the fur trade resulted in many unintended changes that had a broad impact on North America and even Europe in the colonial era as the colonists brought a new system of private property and ownership.

1. The fur trade between American Indians and Europeans began

2. For North America, one major result of the fur trade was

3. As a result of the fur trade, some American Indian nations received which of the following from Europeans?

5. Coureurs de boiswere all the following except

6. The fur trade had a significant impact in all the following areas except

“To all Christian & Indian people in this parte of the world and in Europe over the great salt waters, to whom the presents shall come – Wee the Sachims Chief men, Captns and representatives of the Five nations or Cantons of Indians called the Maquase Oneydes Onnandages and Sinnekes living in the Government of New Yorke in America, to the north west of Albany on this side the Lake Cadarachqui sendeth greeting- bee it known unto you that our ancestors to our certain knowledge have had, time out of mind a fierce and bloody warr with seaven nations of Indians called Aragaritkas [Hurons] whose Chief comand was called successively Chohahise the land is scituate lyeing and being northwest and by west from Albany beginning on the south west side of Cadarachqui lake and includes all that waste Tract of Land lyeing between the great lake off Ottowawa [Lake Huron] and the lake called by the natives Sahiquage and by the Christians the lake of Swege [Lake Erie] and runns till it butts upon the Twichtwichs and is bounded on the right hand by a place called Quadoge [Lake Michigan near Chicago] conteigning in length about eight hundred miles and in bredth four hundred miles including the country where the bevers the deers, Elks and such beasts keep and the place called Tieugsachrondio, alias Fort de Tret or wawyachtenok and so runs round the lake of swege till you come to place called Oniadarondaquat which is about twenty miles from the Sinnekes Castles.”

Excerpted from the Nanfan Treaty of 1701

1. Which of the following most likely precipitated the account in the excerpt provided?

2. The French differed from the English in their attitude toward American Indians in that the French

Cronon, William. Changes in the Land: Indians, Colonists and the Ecology of New England. New York: Hill and Wang, 1983.