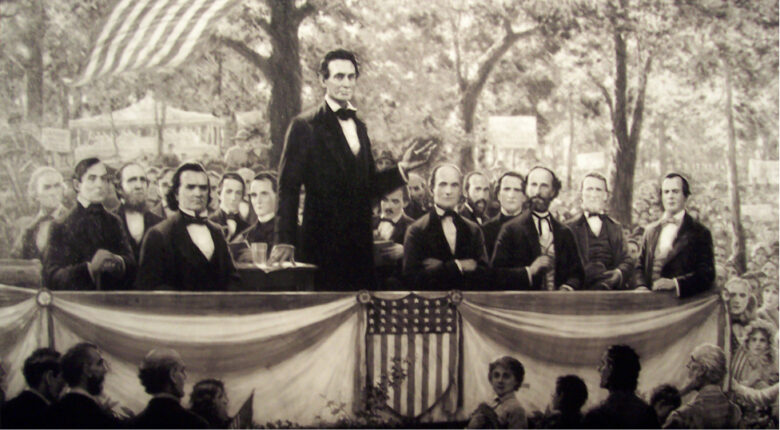 Use this Narrative with the Kansas-Nebraska Act and Bleeding Kansas Narrative and the South Carolina Secession Debate, 1860 Primary Source to allow students to see the result of growing sectionalism and the spark of the Civil War.

The presidential election of 1860 proved to be the most significant in the history of the United States. Four major candidates squared off in a contest that ultimately led to secession, because the slave states of the deep South began their rebellion in response to Abraham Lincoln’s election as the first Republican president. Ironically, although this battle was the culmination of the divisive politics of sectionalism, each candidate sought to convince voters he was the more conservative choice and would save the union, whereas his opponents were radicals who would tear it apart.

Sectionalism dominated American politics throughout the 1850s as territorial expansion brought the question of slavery to the forefront. In the wake of the Mexican War, the country had divided along sectional lines over the admission of California as a free state. All past compromises and agreements were threatened as party lines broke down and politicians rallied to defend the interests of their section – South or North. The Compromise of 1850 averted a more serious crisis, but the issue returned in 1854, when Stephen A. Douglas proposed the Kansas-Nebraska Act.

This bill overturned the old agreement forged in the Missouri Compromise of 1820, which had set the division between free and slave territory at the 36°30′ line. Now, with Douglas’s plan for popular sovereignty, the new territories of Kansas and Nebraska would decide for themselves whether to be free or slave at the time they applied for statehood. This led to conflict over the status of Kansas, with pitched battles being fought in the territory by 1856. Then, when the Supreme Court issued its ruling in the Dred Scott case the next year, it asserted that Congress could not prohibit slavery because the Constitution protected the property rights of slaveholders. As politics became more polarized and sectionalism divided the country, the Democratic Party began to splinter along sectional lines. The opposition Whig Party collapsed, and the new antislavery Republican Party emerged and rapidly gained strength across the North.

As the 1860 presidential election approached, the Constitutional Union Party nominated John Bell of Tennessee as its candidate. Formed in December 1859 by a group of procompromise politicians, the party hoped to calm the nation and prevent a civil war by finding a middle ground. The Constitutional Union platform simply stated that it resolved “to recognize no political principle other than the Constitution of the country, the Union of the states, and the Enforcement of the Laws.” Bell, a long-time Whig who had served as a congressional representative, senator, and secretary of war, offered himself as an experienced candidate who was moderate on the issue of slavery, although he owned slaves himself.

Campaigning on the Constitution and the Union should have appealed to voters, and Bell did enjoy support in places like Virginia, Kentucky, and Tennessee, where a civil war was likely to be fought. But by 1860, most Americans did not want compromise. They feared the republic was in danger and that making a deal with their political foes meant selling out their core principles. Instead of compromise, they wanted victory over the other side. Republicans thought they represented the majority of the American people who supported freedom. Democrats were divided between southerners who wanted to uphold a constitutional right to own human property in slaves, and northerners who believed they were aligned with the principle of democratic self-government. Sectionalism led to such deep polarization that compromise seemed impossible. Instead, they wanted victory.

Republican Abraham Lincoln of Illinois was the second candidate selected. At the party’s national convention in Chicago, Illinois, May 16-18, 1860, the field of possible candidates was crowded, with William H. Seward of New York, Salmon P. Chase of Ohio, Edward Bates of Missouri, and Simon Cameron of Pennsylvania all enjoying strong support. Lincoln emerged as a contender after his failed bid to win a seat in the U.S. Senate in 1858, when he ran against his long-time rival Stephen A. Douglas, the incumbent Democrat, despite the rising Republican tide in that state. After being nominated for the Senate race, Lincoln had delivered a powerful speech in Springfield on June 16. Known as the “House Divided Speech,” the address set the stage for the Lincoln-Douglas debates that followed later that year by focusing the congressional election on the issue of the moral evil of slavery and its territorial expansion. Lincoln worried about the future of the Union because slavery endangered free republican government: “A house divided against itself cannot stand. I believe this government cannot endure, permanently, half slave and half free. I do not expect the Union to be dissolved – I do not expect the house to fall – but I do expect it will cease to be divided. It will become all one thing or all the other.”

Lincoln lost the 1858 election and Douglas returned to the Senate. But the Republican had positioned himself to be a dark-horse candidate (i.e., someone who emerges to win at just the right moment) for his party’s presidential nomination in 1860. Between January 1859 and May 1860, he returned to his law practice in Springfield but also traveled widely, making at least 30 different speeches in eight different states. Most famously, he went to New York City and addressed students at Cooper Union in February 1860. In the lecture, Lincoln carefully explained his antislavery position, opposing the expansion of slavery into the territories. He argued that the Republican policy on slavery was the conservative position because it was closest to the view of the Founding Fathers, and that the Democrats were the radicals who threatened to destroy the nation.

At the Republican National Convention in Chicago, Lincoln had his campaign agents work behind the scenes, approaching state delegations and convincing them to make him their second choice. When none of the leading candidates were able to win the nomination in the early balloting, their supporters turned to Lincoln, and he was nominated on the third ballot. In keeping with tradition, Lincoln largely stayed out of the public eye during the presidential campaign, letting others rally the voters while he organized the effort from Springfield.

In their 1858 debates, Lincoln had forced Democrat Stephen Douglas to stand by his plan to let popular sovereignty decide the issue of the territorial expansion of slavery. While many in the North and West still found the policy to their liking, southerners now rejected popular sovereignty in the wake of the Dred Scott case. Thus Douglas, the favorite of northern Democrats, had lost southern support. To prevent his nomination, southern delegates bolted from the Democratic national convention, held in Charleston, South Carolina, from April 23 to May 3, 1860. Unable to select a nominee, the Democrats decided to reconvene in Baltimore, Maryland, in June. There, the party split along sectional lines. Northern Democrats nominated Douglas, and southern Democrats chose Vice President John C. Breckinridge of Kentucky as their candidate. Douglas argued that he was the more conservative candidate, one who could save the Union by not interfering with slavery but instead letting democracy decide the issue. Unusually for a presidential candidate at that time, he traveled about and made a number of speeches. Accused of actively campaigning, he said at first that his trip was made only to visit his sick mother, not to try to win votes.

Breckinridge saw his candidacy as a matter of honor. He ran despite having almost no chance to win, because he thought it was better to lose than to accept the shame of supporting a northern candidate like Douglas. A dynamic young politician, he had a bright future ahead of him when he chose to accept the nomination of the southern Democrats. His campaign agents focused on the threat of Abraham Lincoln, whom they labelled a “Black Republican” whose election would lead to slave rebellions, tyrannical government, and even the end of the family and true religion. They painted Lincoln as a radical who would tear apart the society and culture of the United States. Sticking with the political tradition of the day, Breckinridge remained quiet throughout the election season, but he did make one speech in which he presented himself as a man of honor, a true conservative who would save the Union from Yankee radicals.

The election became a mostly sectional contest, with Lincoln and Douglas vying for votes in the North, and Bell and Breckinridge competing in the South. Ultimately, Lincoln received less than 40 percent of the popular vote and was barely competitive in the south, but he carried almost all the free states to win a clear majority in the Electoral College, and he became the first Republican president of the United States.

Southerners refused to accept him as their president. South Carolina led the resistance to Lincoln, passing an ordinance of secession in December 1860. Others soon followed, and in February 1861, representatives from seven southern states met in Montgomery, Alabama, to create a new government, the Confederate States of America. Despite southerners’ insistence that state’s rights included the right to secede or withdraw from the Union, Lincoln and the majority of northerners saw secession as treason, an act of rebellion. Under the Constitution, the president had the authority to put down such a rebellion. Desperate attempts at compromise gave way to conflict in April 1861. The election of 1860 had led to the Civil War.

1. Illinois’s Stephen Douglas was considered the frontrunner to secure the Democratic presidential nomination in 1860 due to his political experience and

3. Questions regarding the status of slavery in the territories had the greatest impact on the

4. Formed in 1859, the Constitutional Union Party, which pledged to defend “no political principle other than the Constitution . . . the Union . . . and the Enforcement of the Laws,” had its greatest electoral support in

5. Which is the most accurate statement regarding the selection of the 1860 Republican presidential nominee?

6. The broader significance of the Lincoln-Douglas debates in 1858 was felt in

Sir: I accept the nomination tendered me by the Convention over which you presided, and of which I am formally apprised in the letter of yourself and others, acting as a Committee of the Convention, for that purpose.

The declaration of principles and sentiments, which accompanies your letter, meets my approval; and it shall be my care not to violate, or disregard it, in any part.

Imploring the assistance of Divine Providence; and with due regard to the views and feelings of all who were represented in the Convention; to the rights of all the States, and Territories, and people of the nation; to the inviolability of the Constitution, and the perpetual union, harmony and prosperity of all, I am most happy to co-operate for the practical success of the principles declared by the Convention.

Abraham Lincoln, Letter of Acceptance Endorsing the Platform, May 23, 1860

1. This excerpt most directly led to

2. Which of the following developments represented a continuation of the sentiments?