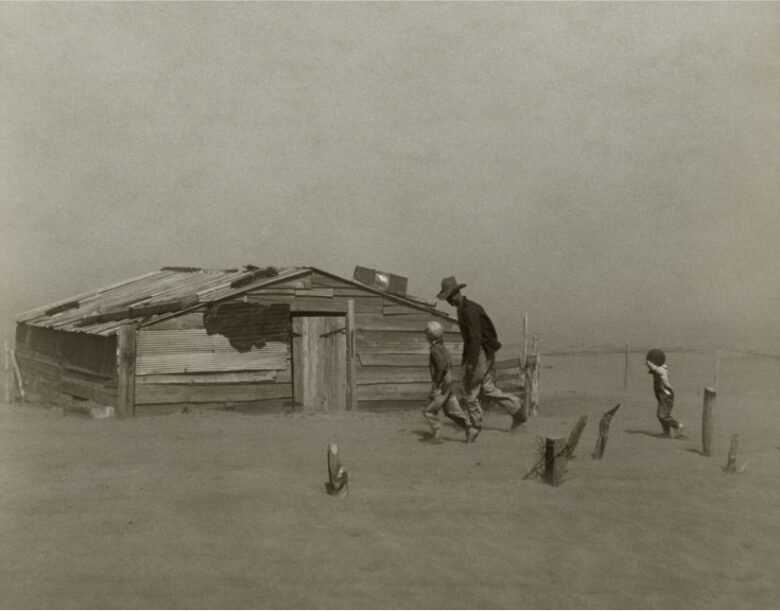 Use this narrative with the Photographs: The Dust Bowl and Rural Poverty, 1936-1937 Primary Source to have students analyze the impact of poverty during the Great Depression.

On May 11, 1934 an enormous dust storm, 1,500 miles long and 600 miles wide, was moving eastward across the Great Plains, eventually depositing 12 million pounds of dust on Chicago – four pounds for each person in the city. The particles from this storm were not the relatively insignificant kind that normally accumulate around the average house, but rather a total of 300 million tons of topsoil, parched to dust by drought and blown out of the Great Plains by a strong storm system that originated on the west coast.

The storm quickly moved into the cities to the east like Toledo, Cleveland, and Buffalo and then to the Eastern Seaboard. In some locales, the dust was so deep on the roads that snowplows were brought out to clear them. The storm took six hours to pass over Manhattan when it arrived there, and it brought the city to a halt. Cab drivers had to stop to remove dirt from their windshields, and commercial airplanes were grounded because of low visibility and fears that engines choked with dust would fail. In Boston, an airplane owned by the Massachusetts Institute of Technology ventured into the storm and found that it extended over three miles (17,000 feet) into the upper atmosphere.

In its wake, the storm left a massive clean-up effort and bold headlines. “Huge Dust Cloud, Blown 1,500 Miles, Dims City 5 Hours” was the banner in the next morning’s New York Times. The Boston Globe carried a front-page story reading, “Vast Dust Blanket Over New England.” The storm then blew out to sea, where people on ocean liners hundreds of miles from land saw the monster black clouds of dust billowing up from the west. One tanker captain operating many miles off Cape Hatteras, North Carolina, reported that his ship was completely covered with a fine blanket of reddish-brown soil.

This was neither the first nor the last of the many dust storms of the 1930s, but it was the one that got the nation’s attention – the one that allowed people in the east from Richmond, Virginia, all the way north to the Canadian border to actually see, taste, and smell the phenomenon, and to suffer the respiratory distress that came along with it.

This storm was also the one that spurred legislation allowing a first step to be taken to alleviate the situation and give the dying Great Plains a new lease on life. The storm hit Washington, DC, just as testimony was being given by presidential advisor Hugh Bennett, who headed the Soil Erosion Service, a temporary government agency created to thwart the very conditions that had led to the dust storms. Bennett’s group was about to run out of money, and he was asking for new funding as well as a permanent agency to deal with soil conservation. Quickly, Congress passed legislation to create the Soil Conservation Service, which still exists today as the Natural Resources Conservation Service.

The most disastrous storm yet struck the Midwest on April 14, 1935, earning that day the name “Black Sunday” and causing a writer for the Associated Press to coin the term “Dust Bowl” to describe the area where these storms originated and did the greatest damage. Crops were being destroyed and, in some cases, the dust was piling up and drifting like snow, burying homes and farm buildings.

The economic effects of these storms were devastating, doubly so when coupled with the effects of the Great Depression. Unable to raise crops and pay their bills, farmers lost their land and migrated in search of work. Many families simply walked away from their farms and headed to the west coast, where they hoped to find work and where their children could breathe. Although they came from many states, not just Oklahoma, these migrants became known as “Okies,” which was almost always uttered as a term of disparagement.

But the question asked by Americans who had once seen the Great Plains as an earthy Garden of Eden was, “How did this happen?” Was this a disaster created by human folly and greed or just a cyclical natural occurrence an “act of God” as some believed?

The source of the dust was a great expanse of land that had once been inhabited by native peoples, native grasses, and herds of buffalo and had long existed as a sustainable environment, until it began to be settled by people moving west. In 1862, Congress had passed the Homestead Act, which was signed into law by President Abraham Lincoln and gave ownership of 160 acres to any person 21 years or older willing to settle on the Great Plains and farm the land for five years. When these settlers arrived, they began to plow up the native grass and the sod in which it was rooted. They were thus called “sodbusters,” and in the absence of forests to provide logs, they commonly built sod homes or “soddies” with strips of sod they lifted from the ground and piled up to form walls.

Then came the tractors and other gasoline-powered farm tools, which stripped more and more of the native grasses. This problem was exacerbated during World War I, when the high price of wheat and the needs of the Allied troops encouraged farmers to grow even more wheat, removing grass and seeding areas in the prairie states. Lands that had once been used only for grazing were being turned into wheat fields. There were even slogans that tied wheat to victory: Plant More Wheat! Wheat Will Win the War!

“The tractors had done what no hailstorm, no blizzard, no tornado, no drought . . ., nothing in the natural history of the southern plains had ever done,” writes historian Timothy Egan in The Worst Hard Time, his book about the Dust Bowl. “They had removed the native prairie grass . . . so completely that by the end of 1931 it was a different land – thirty-three million acres stripped bare in the southern plains.”

The immediate cause of the dust storms was the drought that began in the prairie states in 1931, when a lack of rain contributed to a decade-long dry spell. Farmers found it nearly impossible to raise their crops or feed their livestock, and they began losing money. Thousands could not pay their mortgages and lost their farms. Massive quantities of sun-dried topsoil were swept up into the air. Fourteen of the resulting large dust storms, or “black blizzards” as they were known, hit in 1932, and 38 rolled across the plains the following year. Then they started coming with even greater frequency.

The uprooting, poverty, and human suffering caused by the Dust Bowl and exacerbated by the Great Depression were all notably portrayed in John Steinbeck’s novel The Grapes of Wrath, and in the graphic images produced by Dorothea Lange and other photographers working for the Farm Security Administration. Steinbeck’s book and Lange’s photographs, including one that has been called “Migrant Mother” and “Migrant Madonna,” have endured as reminders of a time of great despair in America.

1. The Dust Bowl was created by all the following except

2. The Dust Bowl inflicted the most significant damage on which area of the United States?

3. The plight of the victims of the Dust Bowl was portrayed by John Steinbeck in his novel

4. For economic opportunity, people known as “Okies” migrated toward which region of the United States?

5. Families who settled the Great Plains and built their homes from the available resources there were often called

“We go around all dressed in rags
While the rest of the world goes neat,
And we have to be satisfied
With half enough to eat.
We have to live in lean-tos,
Or else we live in a tent,
For when we buy our bread and beans
There’s nothing left for rent.

I’d rather not be on the rolls of relief,
Or work on the W. P. A.,
We’d rather work for the farmer
If the farmer could raise the pay;
Then the farmer could plant more cotton
And he’d get more money for spuds [potatoes],
Instead of wearing patches,
We’d dress up in new duds.
From the east and west and north and south
Like a swarm of bees we come;
The migratory workers
Are worse off than a bum.
We go to Mr. Farmer
And ask him what he’ll pay;
He says, “You gypsy workers
Can live on a buck a day.”

1. When the excerpted song was written, the government

2. One doctrine or policy that may have contributed to the conditions described in the excerpt was

3. The sentiments expressed in the excerpt most likely would have been espoused by which group?

Photographs created by the photographers of the Farm Security Administration: http://www.loc.gov/pictures/collection/fsa/