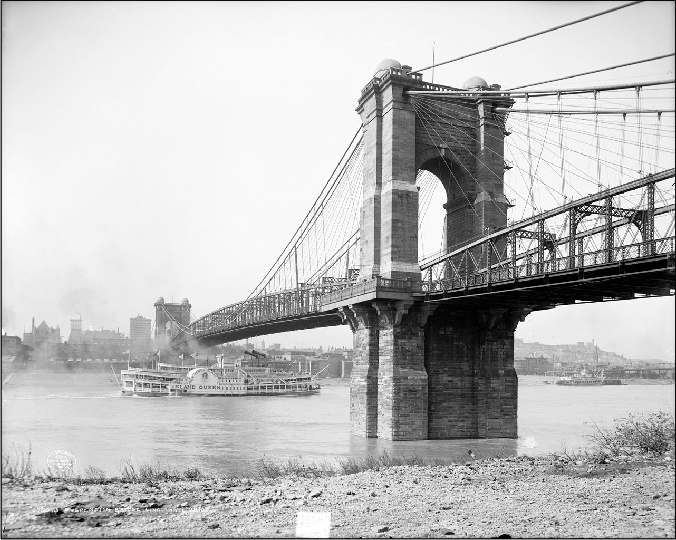 Use this Narrative alongside The Transcontinental Railroad Narrative to highlight the infrastructure innovations of the Gilded Age.

The Brooklyn Bridge, which taught the world how to span great distances, was one of the three wonders of nineteenth-century engineering. The other two were the Crystal Palace in London (1851), which demonstrated how to enclose vast spaces, and the Eiffel Tower in Paris (1889), which showed how to reach great heights.

Manhattan is nearly unique among the world’s great urban centers in that it is an island. In the eighteenth and early nineteenth centuries, its geography necessitated ferries to convey people and goods across New York’s busy waterways. In the far colder winters of the early nineteenth century, ferrying could become difficult when the East and Hudson Rivers froze over. This made a bridge between Manhattan and what was then the rapidly growing city of Brooklyn highly desirable to allow for the movement of workers, goods, and services between the two. But until the mid-nineteenth century, the technology of bridge building did not allow a span of the required size and height above the water to allow shipping to pass beneath.

Bridges are as old as any technology known, and the Romans, the greatest engineers of the ancient world, perfected the arched bridge, but that type would not do for the East River, one of the busiest waterways in the country, with very large vessels passing up and down.

The simple suspension bridge, in which a walkway is suspended from ropes across a gorge, also has an ancient history. But such a bridge can hold only a very modest weight. A more complex form of the suspension bridge, in which cables anchored on either end are suspended from uprights and a roadway hangs from the cables, was first built in 1801 in western Pennsylvania. It was 70 feet long. Metallurgy, especially of iron and then steel, improved rapidly in the early nineteenth century. With the ability to produce wire at much lower cost, longer spans became possible. By 1848, a suspension bridge across the Ohio River at Wheeling, West Virginia, became the first to have a span longer than 1,000 feet.

When a bridge was planned to cross the Ohio River at Cincinnati at about the same time, John Augustus Roebling was hired to design it. Roebling had been born in 1806 in Prussia, where his mathematical talents were soon recognized and he received a first-class education in engineering. In 1831, he joined a group of German settlers moving to western Pennsylvania but was soon practicing engineering rather than the more common occupation of farming. Roebling was struck by how much engineering projects like the Suez Canal and the intercontinental railroad contributed to economic growth and to the development of civilization. He began to manufacture metal-wire rope on his land, and he later founded a large wire-making facility in Trenton, New Jersey. In 1845 he designed and built his first suspension bridge.

He later built a suspension bridge that carried vehicles and railroads over the Niagara River. The Cincinnati-Covington Bridge over the Ohio River (now named the John A. Roebling Bridge in his honor) was the longest in the world when it was finally completed in 1866.

Roebling began designing the Brooklyn Bridge, with a span half again as long as the Cincinnati bridge, in 1867. But in 1869, just as construction was about to begin, he was standing on the edge of a dock on the Brooklyn side of the East River when his foot was crushed by an arriving ferry, and he died of a resulting tetanus infection three weeks later.

The project was taken over by his 32-year-old son, Washington Roebling, who had been the assistant engineer on the project. The younger Roebling had studied civil engineering at Rensselaer Polytechnic Institute in Troy, New York, graduating in 1857. He served in the Union forces in the Civil War, rising to the rank of colonel, and was instrumental in holding Little Round Top at the Battle of Gettysburg.

By far the most difficult part of constructing this unprecedented structure was setting the uprights, the massive stone towers that were designed to bear the weight of the cables that, in turn, would bear the weight of the roadway. The uprights had to be footed on the bedrock beneath the rock and soil (called muck) of the East River, which is actually a tidal race where the tides can reach speeds of eight knots.

To dig beneath the water level, Washington Roebling designed two immense, airtight caissons made of yellow pine, open at the bottom. Compressed air forced the water out of the caissons and an airlock allowed workers to enter and leave. As the workers dug, they shoveled the muck to a water-filled pit in the center of the caisson. From there it was forced up a tube by the pressure of compressed air and removed by a crane using a clamshell bucket.

Working in compressed air is hazardous. Many workers developed what was later called caisson disease or “the bends,” which was poorly understood at the time. Inert gases, especially nitrogen, which makes up about 80 percent of the atmosphere, enter the bloodstream in such conditions, and once the worker has returned to normal atmospheric pressure, these gases bubble out and can cause severe pain in the joints and many other symptoms, including death.

Washington Roebling himself suffered an attack of caisson disease in 1870, leaving him crippled for the rest of his life. He was unable to visit the construction site himself, although he was able to observe it from his Brooklyn residence with a telescope while his wife, Emily, acted as his go-between, becoming a highly competent engineer herself. According to historian David McCullough, this was the only time in known history that a major engineering project was overseen by a chief engineer who was unable to visit the project personally.

When the bedrock on the Manhattan side of the river turned out to be deeper than expected, Roebling, knowing that working at greater depths would be very hazardous for the workers, boldly decided the 30-foot layer of hard sand above the bedrock would be enough to hold the vast weight of the tower, 90,000 tons. The caissons, which had cost the lives of about 20 workers, were filled with cement and left in place.

When the towers had been completed after five years of construction, work could begin on the cables, which contained 14,000 miles of steel wire – the first time steel wire was used in bridge construction. This was possible because of the radical drop in the cost of steel after the invention of the Bessemer converter in 1857.

Finally, after 14 years, the bridge was complete . At the opening ceremony on May 24, 1883, President Chester Arthur presided with the mayors of New York and Brooklyn (which were separate cities until 1898). Emily Roebling was the first person to cross the bridge, making the trip in an open carriage and followed that day by 1,300 other vehicles and 150,000 people.

A week later, a panic broke out on the bridge when people thought it might suddenly collapse, and 12 people were trampled to death. Several days afterward, the circus entrepreneur P. T. Barnum steered 21 elephants across the bridge, led by the famous Jumbo, to demonstrate the bridge’s strength. Today, the Brooklyn Bridge remains world famous as one of the icons of New York City, and it is still one of the vital parts of the great city’s transportation infrastructure. The bridge was a marvel of modern technology. It repaid its wealthy boosters and provided opportunities for common workers, immigrants, and small business owners in Brooklyn and Manhattan.

1. The Brooklyn Bridge linked Brooklyn to

2. The Brooklyn Bridge was considered one of the three “engineering wonders” of the nineteenth century, along with

3. What increased as a result of the construction of the Brooklyn Bridge?

4. What industrial innovation facilitated the building of the Brooklyn Bridge?

5. The development that allowed work to be done below the water level was

6. The Brooklyn Bridge is an excellent example of what type of bridge?

“The bridge roadway from its New York terminus opposite the City Hall to Sands Street, Brooklyn, is a little over a mile long (5989 feet), and it will take the pace of a smart walker to make the aerial journey, with its arched ascent, in twenty minutes. The cities will probably decide, confining the tolls to vehicular traffic, not to charge him the one cent first proposed for the privilege of taking this trip on ‘foot’s horse.’ But for five cents he can jump at either end into fine cars, built on the pattern of the newest Manhattan elevated cars, which move apparently of their own volition, until one finds the secret in the endless wire rope underneath that is worked by stationary engines on the shore and makes continual circuit, across under one roadway and back under the other. These will take him across in a little less than five minutes, and it is not improbable that through trains will ultimately convey passengers from the northernmost end of New York over the Brooklyn Elevated that is to be, bringing them nearer to the health-giving beaches of Long Island by nearly half an hour’s time.”

1. The ideas expressed in the excerpt are most closely associated with

2. Which of the following contributed most directly to the need for the innovation described in the excerpt?

3. The innovation described in the passage is most similar to the

McCullough, David. The Great Bridge: The Epic Story of the Building of the Brooklyn Bridge. New York: Simon and Schuster, 1972.