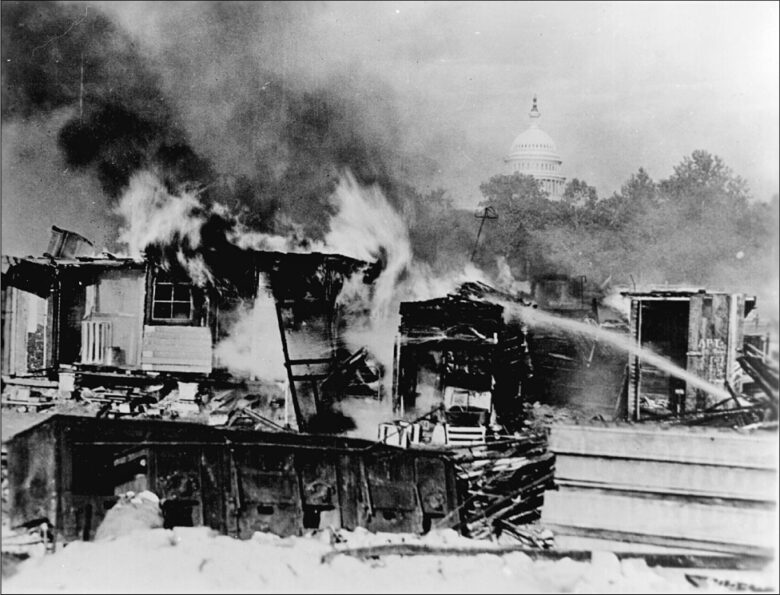 Use this Decision Point with The Crash of 1929 Narrative and the Should Herbert Hoover Be Considered an Activist President? Point-Counterpoint to have students explore the effect the Great Depression had on Americans in the 1920s and 1930s.

At the end of World War I in 1919, those Americans who had served in the conflict felt they deserved additional compensation, having been paid only a dollar a day for domestic service and $1.25 for overseas service. In contrast, a worker in a shipyard or other defense job was paid 10 to 15 times as much. At that time, and through the Vietnam War, an American man could be forced into military service through a military draft. Of the 4.8 million American men who fought in World War I, approximately 2.8 million had been drafted.

In 1924, Congress finally responded to the demands of the war veterans that Congress honor its earlier promise to pay “adjusted compensation” for their service by passing a bill that would offer them a cash bonus. The bill was vetoed by Republican President Calvin Coolidge, who stated that “patriotism which is bought and paid for is not patriotism,” but his veto was overridden by Congress and the bill became law. Under it, veterans who were scheduled to receive $50 or less would receive their money immediately, but the rest were given certificates that could be redeemed for cash in 1945. The only way the bonus could be paid before that date was for the recipient to die and allow his heirs to collect the money. This led veterans to name the arrangement the “Tombstone Bonus.”

The veterans were disappointed, but nothing happened until May 1929, when Representative Wright Patman (D-TX), a war veteran himself, introduced a bill calling on Congress to give them the bonus. But Congress seemed to have lost interest in the veterans and the bill died. Then came the 1929 stock market crash and the Great Depression, which made the veterans even more urgently want to receive their bonus early. Early in 1932, Patman again moved to introduce legislation proposing immediate payment.

In March of that year, an unemployed former Army sergeant named Walter W. Waters had a decision to make. He and his fellow ex-soldiers were unemployed because of the Depression, and he wanted veterans to receive the promised bonus. The right to petition government was a basic American right guaranteed in the First Amendment, and he wanted the veterans to exercise that right before the Congress. Inspired by Patman’s legislation, Waters addressed a meeting of veterans in Portland, Oregon, and suggested they join him by boarding a freight train and heading for Washington, DC, to demand the money he argued they were rightfully due. No one took him up on his offer that night. But by May 11, Waters was able to recruit approximately 300 followers, who headed to Washington to push for the immediate payment of their bonuses after a new version of the Patman bill had been introduced in the House of Representatives. As word of the group spread, other veterans’ units formed and headed to Washington. The movement grew as radio stations and local newspapers reported on the growing Bonus Army and its mission. “The March was a spontaneous movement of protest, arising in virtually every one of the forty-eight states,” observed novelist and veteran John Dos Passos.

Following Waters’ lead, more than 25,000 veterans and their families traveled to Washington, DC, to petition Congress and President Herbert Hoover to award them their bonus immediately. Fortunately for the marchers, Pelham Glassford, the local police chief and a veteran of the war himself, made accommodations for this influx, including the creation of an enormous camp in the Anacostia Flats, a section of Washington close to the Capitol but separated by a drawbridge across the Anacostia River. Glassford understood that Americans had an inherent right to assemble in Washington and petition the government for the “redress of grievances” without fear of punishment or reprisals. A compassionate and colorful man who rode a blue Harley-Davidson motorcycle around the city and often stopped to chat with homeless people, Glassford set a norm for marching on Washington that endures to the present day.

On June 15, the House of Representatives passed the new bonus bill by a vote of 211 to 176. Two days later, some 8,000 veterans massed in front of the Capitol as the Senate prepared to vote, while another 10,000 assembled before the raised Anacostia drawbridge. The police were anticipating trouble because of the large crowds. The Senate debate continued until after dark. Finally, at 9:30 p.m., Waters learned that the bill had been defeated and shared the news with his followers.

When it appeared that the bonus would not be paid, many of the marchers refused to leave, and President Hoover ordered the Army to evict them. Using tear gas, tanks, and a troop of saber-wielding cavalry commanded by Major George S. Patton, U.S. Army chief of staff General Douglas MacArthur drove the marchers out of Washington and burned their main camp on the Anacostia Flats.

A young Dwight D. Eisenhower, MacArthur’s chief of staff, argued with his boss, insisting that the Army should stay out of what was essentially a local police matter. He tried to convince MacArthur not to cross the bridge into Anacostia. Secretary of War Patrick Hurley, speaking for the president, had specifically forbidden this action. Eisenhower told MacArthur that Hurley had sent two high-ranking officers to deliver orders directly to MacArthur, but MacArthur refused to see them. Eisenhower later wrote that MacArthur said, “He was too busy and did not want either himself or his staff bothered by people coming down and pretending to bring orders.” Partly as a result of his opposition to it, Eisenhower escaped being tainted by the episode.

Americans were shocked by disturbing newspaper and newsreel images of Army tanks, soldiers marching with fixed bayonets, and saber-waving mounted cavalry chasing off veterans and their families in the shadow of the Capitol Dome. “It’s war,” a newsreel narrator intoned. “The greatest concentration of fighting troops in Washington since 1865. They are being forced out of their shacks by the troops who have been called out by the President of the United States.” Movie audiences in many cities booed the U.S. Army and jeered at MacArthur and Patton when the newsreels were shown. To many Americans, the veterans were heroes, not the soldiers used to disperse them.

Democratic presidential nominee Franklin D. Roosevelt benefitted politically from the expulsion of the Bonus Army. Roosevelt was opposed to the immediate payment of the bonus, because it would benefit one class of citizen at a time when all groups were suffering. After seeing newspaper photographs of the burning Bonus Army camp, however, he told an adviser that “this will elect me” because it would make President Hoover look bad. Roosevelt’s reading of the political damage to Hoover was correct, and he won the 1932 election that November, beating the incumbent Hoover by seven million votes. General George S. Patton thought the reporting of the event was biased, because the media reported the Army as “act[ing] against a crowd rather than against a mob” and had “insured the election of a Democrat.” David Burner, one of Hoover’s biographers, thought the incident was the final blow to Hoover’s reelection chances: “In the minds of most analysts, whatever doubt had remained about the outcome of the presidential election was now gone: Hoover was going to lose. The Bonus Army was his final failure, his symbolic end.”

Roosevelt still opposed the bonus and vetoed it on several occasions, but it finally passed over his veto in 1936. In June of that year, the first veterans began cashing checks that averaged approximately $580 per man.

Shortly after the United States entered World War II, members of Congress had already begun to consider benefits for the men and women who were serving. Their immediate inspiration for this G.I. Bill of Rights was the long struggle of the veterans of the previous war. The 1944 G.I. Bill, officially known as the Servicemen’s Readjustment Act, became one of the most important pieces of American social legislation of the twentieth century. Nearly eight million World War II veterans took advantage of its generous grants, which paid for college tuition and job-training programs and provided low-interest loans for homes, farms, and small businesses. The G.I. Bill resulted in a well-educated and well-housed American middle class whose accomplishments fueled the soaring postwar economy.

1. The marchers in the Bonus Army were veterans from which war?

2. When first proposed in 1924, the adjusted service compensation bill to assist veterans was passed by Congress over the veto of which president?

3. What major event caused the Bonus Army marchers to demand immediate payment of their bonus?

4. The most immediate reason for the demand made by war veterans in 1932 was that

5. After the U.S. Senate rejected the Bonus Bill, the protesters

6. The government’s handling of the Bonus Army March in 1932 helped guarantee that

1. The situation depicted in the photograph came about because

2. The veterans in the photograph were unsuccessful in the short term. What was the longer-term result of their protest?

Photograph of General Douglas MacArthur directing the evacuation of the Bonus Army from Washington, DC. Library of Congress. http://cdn.loc.gov/service/pnp/cph/3a30000/3a31000/3a31600/3a31673r.jpg