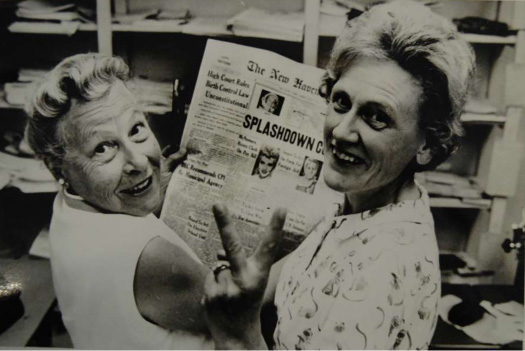 Use this Narrative with the Phyllis Schlafly and the Debate over the Equal Rights Amendment Narrative and the National Organization for Women (NOW), Bill of Rights, 1968 Primary Source while discussing the various civil rights movements occurring during the 1970s to specifically target the issues of women at the time.

No individual is more responsible for the modern birth control movement than Margaret Sanger. Born in 1879, Sanger was one of 11 children born to Irish immigrant parents in upstate New York. The premature death of her mother at the age of 49 years, her health weakened by so many pregnancies, deeply affected Sanger. Before World War I, she lived in lower Manhattan and worked as a nurse among working-class immigrant women. Influenced by the politically radical and bohemian environment of Greenwich Village at the time, Sanger began to promote the use of contraception. She believed reducing unwanted pregnancies was a way to empower and liberate women.

At the time, reliable means of birth control were few (birth control pills were not introduced until 1960), and their use was highly restricted in the United States. The Victorian Era placed great emphasis on sexual restraint and chastity, and in the 1870s, a postal inspector named Anthony Comstock led a nationwide movement against what he defined as sexual vice and obscenity. In response, Congress passed a series of laws named the Comstock Laws, which prohibited the use of the U.S. mails to send obscene materials, contraceptives, or any item promoting the use of contraceptives. In addition, many states passed their own “Comstock laws.” Connecticut and Massachusetts, for instance, banned the use of contraceptives as well as their distribution.

In 1916, Sanger opened the nation’s first birth control clinic in Brooklyn, New York. Soon after, she was arrested and convicted of illegally distributing contraceptives. The clinic was shut down and Sanger spent 30 days in jail. The next year, she created the magazine Birth Control Review to provide the public with information about birth control. In 1921, she helped found the American Birth Control League to educate Americans about birth control and to work toward opening birth control clinics in partnership with medical professionals. In 1942, the organization changed its name to Planned Parenthood.

However, there was also strong public opposition to contraception. Many Americans saw increased access to contraception as a threat to traditional sexual morality. The Catholic Church was actively opposed to artificial contraception. In the Northeast especially, where Catholics were greatest in number, state legislatures resisted attempts to overturn bans on artificial means of family planning.

In the 1920s, the issue of birth control also became increasingly linked to eugenics, or the science of using selective breeding to “improve” the human race. Women’s desire for access to more reliable methods of family planning mixed with concerns that “inferior” individuals and races were having too many children and putting too large a burden on society. As Sanger wrote in 1921, “the most urgent problem today is how to limit and discourage the over-fertility of the mentally and physically defective.” Eugenics thinking also contributed to the passage of restrictive immigration quotas and state laws promoting forced sterilization programs aimed at African Americans, the impoverished, and disabled persons.

By the 1930s, there was greater public interest in birth control and increasing availability of contraceptives such as condoms and diaphragms. When a doctor at one of Sanger’s clinics ordered a diaphragm from Japan, for example, it was confiscated by the federal government. But in the resulting legal challenge, a federal court in 1936 declared that the government could not prevent medical officials from receiving and distributing contraceptives.

After World War II, public support for and use of contraceptives increased. There was also growing interest in population control to deal with the postwar concern about overpopulation, especially in less-developed countries. Advocates of birth control linked contraceptive use to public concerns about the need to curb population to help reduce human suffering.

In the early 1950s, Sanger convinced her friend Katherine McCormack, a long-time women’s rights activist and wealthy philanthropist, to help fund the research of Massachusetts scientist Gregory Pincus, who was working on fertility issues. In his research, Pincus began to experiment with oral hormonal contraceptives that would prevent ovulation in women. He then teamed up with Boston-area doctor John Rock to conduct clinical trials of a new pill. The first large-scale testing of the pill was conducted in Puerto Rico in 1956. The next year, the U.S. Food and Drug Administration (FDA) approved the use of Enovid, the brand name of the pill then being produced by the pharmaceutical company G.D. Searle & Company, but only for the treatment of menstrual problems. It was three more years before the FDA approved the pill for use as an oral contraceptive.

The pill had an immediate and dramatic impact on American society. By 1962, approximately 1.2 million American women were using it every day. Two years later, that figure had reached 6.5 million. The pill was a relatively safe option for women and almost 100 percent effective in preventing conception, making it far more reliable than other forms of contraception. Although users were initially married women, unmarried women were soon also taking the pill. However, some states still retained the old Comstock laws and barred the use of contraception.

Since 1873, for example, it had been illegal in Connecticut to use or distribute any kind of contraception. The law was rarely enforced, but it was still on the books in the early 1960s when the Planned Parenthood League of Connecticut decided to challenge it. Planned Parenthood’s executive director, Estelle Griswold, together with Yale School of Medicine Professor C. Lee Buxton, opened a birth control clinic in New Haven in 1961 to test the law. After they were arrested and fined for their actions, lower courts upheld their conviction, and eventually Griswold took her case to the Supreme Court. In its 1965 decision Griswold v. Connecticut, the court struck down Connecticut’s law by a 7-2 vote. Writing for the majority, Justice William O. Douglas argued that the Connecticut law violated the “right of marital privacy.” Although an explicit right to privacy does not exist in the Constitution, Douglas found the right within the “penumbras” and “emanations” of the First, Fourth, and Fifth Amendments.

However, the court’s decision extended the right of privacy only to married couples. The 1972 case Eisenstadt v. Baird, which struck down Massachusetts’s anticontraception law, extended the right of privacy to unmarried people. Griswold became the basis for the court’s 1973Roe v. Wade decision that the right of privacy guaranteed a women’s right to have an abortion, although that right also had to be balanced against state interests. However, the right to privacy was also critical in later Supreme Court decisions such as Lawrence v. Texas (2003), which struck down anti-sodomy laws in Texas, and Obergefell v. Hodges (2015), which upheld the state law allowing same-sex couples the right to marry.

The arrival of the oral contraceptive pill coincided with the beginning of the modern feminist movement and the early stirrings of the sexual revolution. These three forces worked together to effect great changes in American culture and family life. Older structures and taboos against sexuality began to weaken. Now that sex could be separated from childbearing, attitudes toward sex outside of marriage began to loosen. The counterculture of the late 1960s further emphasized rebellion against mainstream cultural restraints, especially in the area of sexual relations. In 1968, Pope Paul VI announced the papal encyclical Humanae Vitae, upholding the Catholic Church’s opposition to artificial contraception and warning of numerous changes to sexual morality in the West. The encyclical caused deep controversy in the United States. Public opinion polls indicated that a majority of American Catholics approved of the contraceptive pill, and increasing numbers of Catholic women used it.

The birth control pill gave women greater independence and personal autonomy and further separated conception from sexual intercourse. The Baby Boom the sharp increase in U.S. birth rates that occurred immediately after World War II had ended by 1964. Women could now better plan when to have children and avoid unwanted pregnancies, but overall they and their partners were also choosing to have fewer children. Birth rates continued to decline dramatically in the decades since the 1960s, falling to the lowest levels in the nation’s history. Women also began to postpone marriage and enter the workforce in larger numbers. Divorce rates increased, marriage rates declined, and more children were born outside marriage. Although these demographic changes were not all the direct result of the greater availability of birth control, when combined with other social forces such as the rise of feminism and the sexual revolution, the introduction of the birth control pill had a tremendous impact on American families and on sexual behaviors and attitudes.

1. The 1965 Supreme Court decision in Griswold v. Connecticut declared that

3. The “Comstock Laws” were associated with which issue?

4. In the early 1960s, great changes in attitudes about American culture and family life were being influenced by all the following except

5. The introduction of oral contraceptives has been linked to all the following social effects except

6. The right to privacy central to the case of Griswold v. Connecticut was similarly crucial to the Supreme Court’s ruling in all of the following except

“The Fourth and Fifth Amendments were described in Boyd v. United States. . . as protection against all governmental invasions – of the sanctity of a man’s home and the privacies of life.’ We recently referred in Mapp v. Ohio. . . to the Fourth Amendment as creating a – right to privacy, no less important than any other right carefully an particularly reserved to the people.’ . . .

The present case, then, concerns a relationship lying within the zone of privacy created by several fundamental constitutional guarantees. And it concerns a law which, in forbidding the use of contraceptives, rather than regulating their manufacture or sale, seeks to achieve its goals by means having a maximum destructive impact upon that relationship. Such a law cannot stand in light of the familiar principle, so often applied by this Court, that a governmental purpose to control or prevent activities constitutionally subject to state regulation may not be achieved by means which sweep unnecessarily broadly and thereby invade the area of protected freedoms.'”

1. The issue described in the excerpt later led to the ruling in which of the following Supreme Court cases?

2. The issue described in the excerpt led to which effect on the American people?

3. Which of the following most strongly shaped the opinion expressed in the excerpt?

Garrow, David J. Liberty and Sexuality, the Right to Privacy and the Making of Roe v. Wade. Berkeley, CA: University of California Press, 1994.

May, Elaine Tyler. American and the Pill: A History of Promise, Peril, and Liberation. New York: Basic Books, 2010.