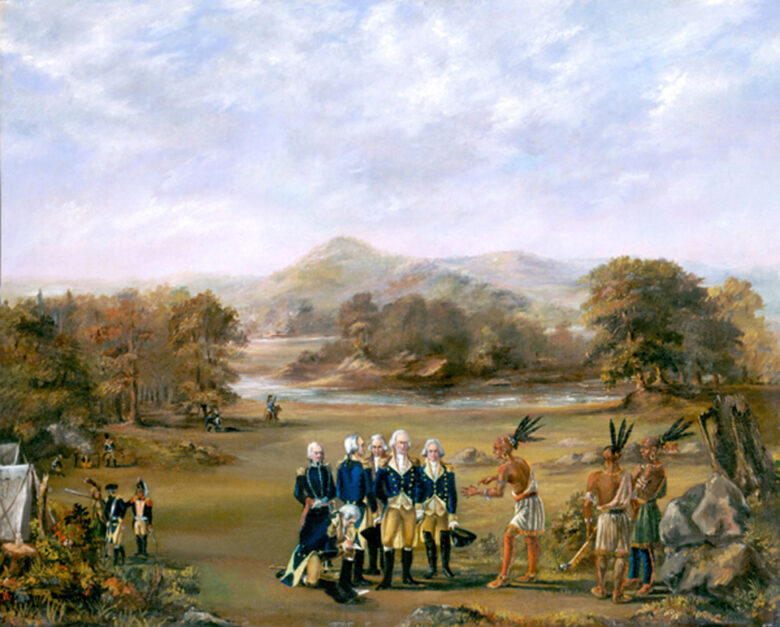 This Narrative can be used in conjunction with The Royal Proclamation of 1763 and the Treaty of New York, 1790 Primary Source to allow students to explore relationships with American Indians in the early republic.

In the 1783 Treaty of Paris that ended the American War of Independence, Great Britain ceded to the United States its claims to the territory between the Appalachian Mountains and the Mississippi River. This cession doubled the size of the new nation and created a vast western territory under the authority of the federal government. For many, this frontier symbolized opportunity. Freed from the prohibition that the British Crown had placed on western settlement in the Proclamation of 1763, settlers could now migrate west, establish farms, and create new states there. But many American Indians called this territory home, and European powers still had imperial ambitions in North America. Great Britain did not leave its Ohio Valley forts until after the 1795 Jay Treaty. If the United States were to incorporate this new western territory into itself, it would have to find a way to protect it from potential enemies and govern it effectively.

Settlers and land speculators were anxious to exploit new western land, but that brought them into direct conflict with the American Indians who lived there. Furthermore, in 1783, several states claimed parts of this new western territory by right of “sea-to-sea” colonial charters granted by the British Crown. After the War of Independence, those states had sold the lands to speculators to settle war debts or given it as bounties to military veterans. These actions led to tensions with American Indians and conflicting jurisdictional claims between the federal government and the states.

During the 1780s, states with western land claims north of the Ohio River gradually ceded them to Congress, creating a single western domain under federal authority. In 1787, Congress passed the Northwest Ordinance, which established guidelines for how the federal government would govern its western territory. On paper, the Northwest Ordinance created a blueprint for orderly and profitable westward expansion, but in reality, life on the frontier was chaotic and violent. Land speculators scrambled to purchase huge tracts of land for resale, while squatters moved west without regard for federal authority or the rights of American Indians. When Britain ceded the trans-Appalachian frontier to the United States in 1783, it made no provision for protecting American Indian claims there. Many of those Indian nations had allied with the British during the war, so the victorious Americans regarded them as conquered enemies and used military threats, alcohol, and bribes to force chiefs into signing land cessions. In this manner, the United States claimed sovereignty over all the western territory ceded by Britain, but it lacked the military power to act on its claim.

The new federal government created by the ratification of the Constitution had enhanced powers to manage the nation’s Indian relations and western territories. President George Washington and Secretary of War Henry Knox were anxious to assert federal control over the frontier, but they knew that doing so by force of arms would require more resources than the new nation could muster. Therefore, Knox advised Washington to stop treating western American Indians as conquered enemies and to restore the British practice of dealing with them as sovereign nations.

Knox believed that doing so would enable the federal government to provide for orderly western expansion while at the same time asserting its power over the state governments, land companies, and squatters whose abusive treatment of American Indians so often led to frontier violence. Washington shared Knox’s belief that failing to acknowledge the American Indians’ right to the land “would be a gross violation of the fundamental laws of nature and that distributive justice which is the glory of a nation.” In one of his first diplomatic speeches as president, he assured a group of Seneca chiefs that “The General [federal] Government will never consent to your being defrauded, but it will protect you in all your just rights.”

At the same time Washington and Knox were putting the civilization policy in place, they were also using diplomacy and military force to dispossess American Indians who resisted federal authority. During the 1780s, the Cherokee warred against settlers moving westward from Virginia into Kentucky and Tennessee. Federal agents negotiated the Treaty of Holston with the Cherokee in 1791 to end these hostilities, guaranteeing federal protection of remaining Cherokee lands and annual payments or annuities of money and goods intended to help the Cherokee adopt European methods of farming. This treaty helped end bloodshed that had plagued the southern Appalachian frontier since the 1770s. By restoring peace, it speeded American migration to Kentucky and Tennessee, states that entered the union in 1792 and 1796, respectively. The treaty also started a process of political and economic transformation for the Cherokee, who were dispossessed of their land during the early nineteenth century.

The federal government had much greater difficulty restoring peace north of the Ohio River. In several treaties negotiated during the 1780s, federal agents had extracted land cessions to eastern Ohio, but most of the Delaware, Shawnee, and Miami peoples who lived there regarded these treaties as fraudulent, and they warred with migrants who began streaming into this country. In the fall of 1790, Washington and Knox ordered General Josiah Harmar to lead a retaliatory expedition against the Ohio Indians.

Harmar marched a force of approximately one thousand militiamen out of Fort Washington (modern Cincinnati) into what is now northeastern Indiana, hoping to deal a decisive blow to the Miami and Shawnee tribes. Instead, the Miami chief Little Turtle led an attack that inflicted heavy casualties on the U.S. forces and resulted in a court martial for Harmar. A year later, General Arthur St. Clair repeated Harmar’s effort, leading an army of about fourteen hundred troops into Indian territory along the Wabash River. On the morning of November 4, 1791, Little Turtle led another assault on the U.S. soldiers, this time with even more devastating results. St. Clair’s militiamen ran from the enemy, and more than half of them were killed or wounded in the battle and retreat. It was the single worst defeat American Indians ever dealt to a U.S. army.

After the disastrous campaigns led by Harmar and St. Clair, President Washington put General “Mad Anthony” Wayne in charge of a much larger army known as the Legion of the United States. Unlike Harmar’s and St. Clair’s forces, the Legion was made up of professional soldiers who went through extensive training before facing battle. In 1794, Wayne led a new expedition into western Ohio to attack Miamis, Shawnees, and other American Indians still hostile to the United States. These Indians expected to receive aid from their former British allies, who remained in forts along the Great Lakes despite having ceded that territory to the United States in 1783.

In June, a large American Indian force led by Little Turtle and the Shawnee chief Blue Jacket attacked Fort Recovery, an American post at the site of St. Clair’s defeat, but the garrison held out. This attack prompted Wayne to advance his troops into the Maumee Valley two months later. The Shawnees and their allies took their position at a site where trees felled by a violent storm provided natural defenses. At the Battle of Fallen Timbers that followed, Wayne’s troops withstood the Indians’ fire and then dispersed them with a bayonet charge. The surviving Indians retreated to Fort Miami, a nearby post still occupied by the British, but the commander there refused his assistance because he did not want to start a war with the United States.

A year after the Battle of Fallen Timbers, Little Turtle, Blue Jacket, and other Ohio Indians made peace with Wayne and the United States in western Ohio under the Treaty of Greenville. Abandoned by their former British allies, the Ohio Indians ceded to the United States most of present-day Ohio and strategic locations along the Great Lakes, including Detroit. In return, federal agents agreed to pay them annuities of cash and goods. Also in 1795, Britain finally agreed to evacuate the disputed forts in the Northwest Territory as part of a treaty negotiated by President Washington’s special envoy John Jay. Jay’s Treaty and the Treaty of Greenville were the twin diplomatic successes that sealed the military victory won by Wayne a year earlier at Fallen Timbers.

The peace secured by the Treaty of Greenville made possible Ohio’s rapid settlement and admission to the union in 1803, but American Indians continued to feel pressure from western settlers along the nation’s frontier. Led by the Cherokee, several southern Indian nations embraced the civilization policy and transformed their methods of agriculture and government, but state governments pressured them to give up their sovereignty and lands. West of the Appalachians, federal agents used debts American Indians accrued in the fur trade to extract additional land cessions. The Shawnee, led by the war chief Tecumseh and his brother Tenskwatawa (also known as the Shawnee Prophet), encouraged other western American Indian nations to unite in militant resistance to white encroachments on their way of life. These tensions culminated in a new wave of frontier violence during the War of 1812 that ultimately made Washington’s and Knox’s vision of peaceful and orderly frontier expansion unattainable.

1. What did Secretary of War Henry Knox suggest to President George Washington in regard to American treatment of American Indians?

2. For most Americans in the 1780s, the region west of the Appalachian Mountains meant

3. After the conclusion of the American Revolution, in regard to the land west of the Appalachian Mountains, the federal government most needed to

4. A major result of the Treaty of Greenville was that

5. As a result of the Battle of Fallen Timbers, American settlers were able to peacefully make land claims in

6. Hostilities between the United States and the Cherokee in the 1780s ended with the

7. American settlers were free to settle in the trans-Appalachian region after

There shall be perpetual peace and friendship between all the citizens of the United States of America, and all the individuals composing the whole Cherokee nation of Indians, . . .

That the Cherokee nation may be led to a greater degree of civilization, and to become herdsmen and cultivators, instead of remaining in a state of hunters, the United States will from time to time furnish gratuitously the said nation with useful implements of husbandry, and further to assist the said nation in so desirable a pursuit, and at the same time to establish a certain mode of communication, the United States will send such, and so many persons to reside in said nation as they may judge proper, not exceeding four in number, who shall qualify themselves to act as interpreters. These persons shall have lands assigned by the Cherokees for cultivation for themselves and their successors in office; but they shall be precluded exercising any kind of traffic.”

1. Based on the excerpted treaty, the United States adopted a policy towards American Indians that it believed would

2. How were the sentiments in the excerpt a continuation of English and American policy toward American Indians?

3. Which group of Americans was most affected by the Treaty of Holston?