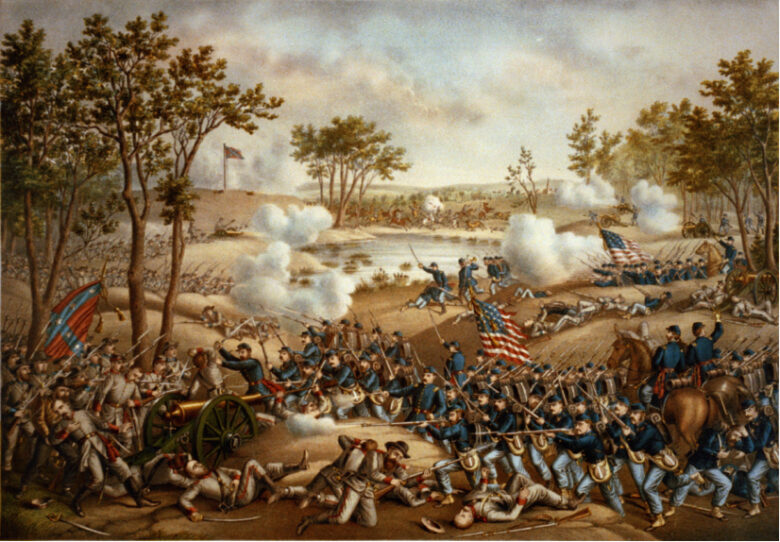 Use this Narrative with the Mathew Brady, The Dead of Antietam Photography, 1862 Primary Source to allow students to see and analyze images from this battle.

September 17, 1862 was the bloodiest day in American history. On a very small patch of land near Sharpsburg, Maryland, nearly 22,000 Americans shed their blood and 6,000 of them died. Anyone who has visited Antietam cannot help but be struck by the compactness of the battlefield in which so many men lay.

But the battle’s importance transcends the number of casualties. On the one hand, it represented the apex of the Confederacy’s offensive military action at that point in the war. On the other, it provided President Abraham Lincoln an opportunity to alter the character of the war by officially launching an attack on the institution of slavery, which the great abolitionist Frederick Douglass called “the stomach of the rebellion.”

To fully understand the importance of the battle of Antietam (also called Sharpsburg), it is necessary to place it in its broader political and military context. The federal government had no constitutional authority over slavery in the states where it already existed. But secession by the slave states opened a constitutional way for Lincoln to end slavery immediately with uncompensated emancipation, because of his war powers as commander-in-chief.

Some Union commanders had treated slaves as contraband of war, meaning captured enemy property – in this case, humans. Others, such as John C. Fremont and David Hunter, had resorted to martial law to free slaves, which Lincoln reversed because they had no authority to do so, and he feared it would cause the border states such as Maryland, Kentucky, and Missouri to secede. In 1861 and 1862, Congress passed two confiscation acts, which allowed some confiscation of Confederate property, including slaves. For Lincoln, all these approaches were of questionable constitutionality. Only a proclamation based on the president’s war power in response to a rebellion would meet constitutional muster.

But Lincoln had to proceed with prudence to maintain a working coalition between members of his Republican Party, who favored emancipation, and War Democrats in the North, who were willing to fight to restore the Union but did not wish to interfere with slavery. In addition, to issue an emancipation proclamation while Lee was defeating Union armies in Virginia would seem to smack of desperation. Lincoln needed a military victory.

In early 1862, General Ulysses S. Grant won a costly victory at Shiloh and captured the critical railroad junction at Corinth, Mississippi. In addition, New Orleans fell to Union forces, which now controlled most of the Mississippi River. However, General George McClellan failed in his bid to take Richmond in the Peninsular Campaign during the Seven Days’ Battle. By the end of August, Lee had shattered Pope’s army at Second Bull Run, or Second Manassas, but had not quite annihilated it. Lee now saw an opportunity to deliver a knockout punch to the Union by invading Maryland to lure McClellan into a battle in which Lee would accomplish what he had almost realized at Second Manassas: the destruction of a major Union army, this time on Union soil.

By invading Maryland, Lee sought nothing less than to change the character of the war. Consistent with his operational approach, he intended to execute a strategic turning movement and destroy McClellan’s army, thereby convincing the population of the North to give up the fight to subdue the South and winning European support for the Confederacy.

The time appeared “propitious,” as Lee wrote to Jefferson Davis, the president of the Confederacy, to invade Maryland. Not only had Lee’s efforts during the Seven Days’ Battle and at Second Bull Run been crowned with success, he also knew that with the April Conscription Act, the Confederacy had exerted its maximum effort to bring troops into the field, whereas the North had barely tapped its potential to raise armies.

But Lee’s plan began to go awry ten days after he crossed the Potomac into Maryland on September 4. The main problem was his decision to capture Harpers Ferry, believing the garrison there presented a threat to his lines of communication. To do so, Lee had to divide his force. This in itself had never been a problem for him, but now he had to act in ignorance of McClellan’s location.

Lee dispatched “Stonewall” Jackson to capture Harpers Ferry, assuming the garrison would either flee or surrender quickly. Meanwhile, he sent his other corps under General James Longstreet to Boonsboro to guard against what he expected to be a characteristically cautious approach by McClellan. But the garrison at Harpers Ferry did not behave as Lee expected, and the local topography forced Jackson to divide his corps into three columns. This disrupted Lee’s timetable and put his divided force at risk, because McClellan’s advance toward western Maryland was much more rapid than Lee expected. However, McClellan, still overly cautious, failed to take advantage of Lee’s divided forces, even after two Union soldiers discovered Lee’s plans on the ground wrapped in three cigars.

Lee struggled to reunite his army before McClellan arrived. Longstreet attempted to delay the Union advance at South Mountain, but, on September 14, the advance guard of the Army of the Potomac dislodged the Confederates from their defensive position at Turner’s Gap. Harpers Ferry finally capitulated on September 15, and except for A.P. Hill’s division, which remained to parole the 12,500-man garrison, Jackson hurried to rejoin Lee, who had taken up a position near Sharpsburg, Maryland.

Even with a reunited army, however, Lee’s ability to stand and fight was severely limited. His soldiers had been scattered across western Maryland from Hagerstown to Pleasant Valley by the heat, the forced marches, and the confusion of retreats. Lee had asked too much of them. As a result, when McClellan unleashed his attack at dawn on September 17, Lee’s army (38,000 troops) was only half the strength of McClellan’s (76,000 troops).

The first action of the day took place on the Union right, as first Joseph Hooker’s corps and then Joseph Mansfield’s hammered the Confederate left. The battle raged back and forth at the West Woods, the Dunker Church, and David Miller’s cornfield. The Union troops surged forward, only to be driven back by desperate Confederate counterattacks. When asked where his division was, John Bell Hood replied, “Dead on the field.”

As the fighting on the Union right ebbed, it surged across the center. After repeated failed assaults against the main Confederate defensive position, which ran along a sunken road, one Union division was able to flank it, delivering deadly fire. As the dead filled the sunken road, which came to be known as “Bloody Lane”, the Confederate center collapsed. Lee was able to patch together a defense, but had McClellan committed his reserve at this point, Lee’s army might well have been annihilated.

Meanwhile, the action shifted to the Union left, where Ambrose Burnside’s corps was stymied by a small detachment of rebels in its attempt to cross a bridge over Antietam Creek (the stream was fordable further to the south). Finally, in the middle of the afternoon, Burnside carried the bridge and was pressing the Confederates back toward Sharpsburg. On the cusp of victory, however, his unit was struck on the flank by A.P. Hill’s division returning from Harpers Ferry. Lee was able to hold his position, but barely.

Lee remained at Sharpsburg the next day, but McClellan refused to renew the battle. Although his casualties were heavy (12,400 dead, wounded, and missing), Lee’s were proportionately heavier (10,300 among his smaller force). In addition, McClellan had a fresh reserve corps that was never committed. Under cover of darkness, Lee slipped away. When McClellan belatedly followed on September 19, his vanguard was repulsed at Shepherdstown. Lincoln was irate that McClellan had let Lee get away, but the president had the victory he needed for his Emancipation Proclamation as southern troops retreated from the North and were prevented from taking Washington, DC.

Lee’s ascent was one factor that changed the character of the war. Had he not emerged at this time, the Civil War might well have ended in 1862, with the seceded states returning to the Union and slavery intact. Instead, under Lee’s aggressive military direction, the conflict became an all-out war that concluded only with the complete subjugation of the South and the end of slavery.

1. Which Union general led the army to victory over the Confederate army at Antietam?

2. What did Abraham Lincoln claim granted him the constitutional power to issue the preliminary Emancipation Proclamation in September 1862?

3. Why did President Lincoln reverse the use of martial law by some of his generals when they liberated freed slaves?

4. What was the main goal of the War Democrats from the North?

5. After the Battle of Antietam prevented a successful invasion of the Union, President Lincoln understood

6. Immediately preceding the Battle at Antietam, Confederate General Robert E. Lee’s confidence was boosted by a victory at

7. Compared with the Confederacy, Union forces at Antietam

1. Persons living in the Confederacy would object to the law from which the provided text was excerpted because in their opinion it violated

2. The main motivation for Congress to pass the law containing the provided excerpt was to